The Asian Human Rights Commission (AHRC) supports the Commission for the Disappearances and Victims of Violence (KontraS), a prominant national human rights organization and the Murder Victims and Research Foundation 1965-1966 (YPKP 1966), a national organization established by victims and families of victims of past human rights abuses, condemn the revision of the Prosecutor’s Law which is currently being discussed by the House of Representatives of the Republic of Indonesia (DPR-RI), in particular regarding the addition of the duties and powers of the Prosecutor’s Office to be actively involved in reconciling serious human rights violations.
In a Working Meeting, on 15 November 2021, with the Ministry of Law and Human Rights, the Ministry of Administrative and Bureaucratic Reform of the Republic of Indonesia (PANRB-RI Ministry), the Ministry of Finance and the Attorney General’s Office, it was agreed to discuss and form a Working Committee (Panitia Kerja) for the Revision of the Prosecutor’s Law (RUU), whereby this Bill will amend the Prosecutor’s Law Number 16 of 2004. 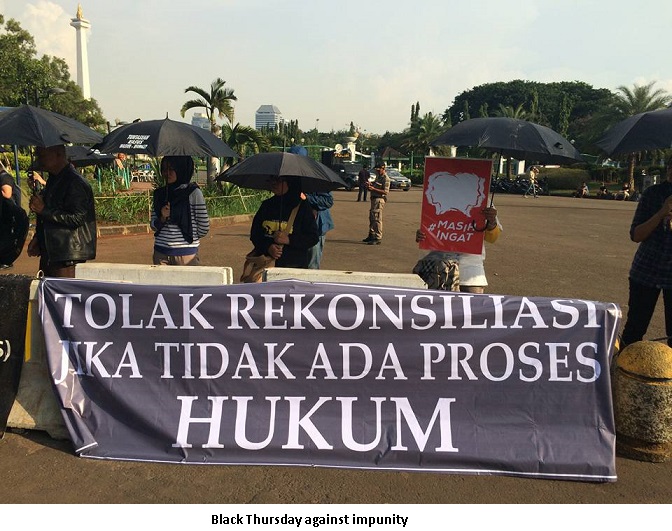 We consider that the formation of the Working Committee on the Prosecutor’s Bill carried out by the Government and the DPR seems very forced, so that it can be resolved and ratified immediately. Instead of strengthening the process of handling law enforcement cases of serious human rights violations, this law revision is used to fortify the impunity that has been going on for cases of serious human rights violations.

We note a number of articles that will hinder the settlement of cases of serious human rights violations, including the following:

First, Article 30 C letter b states that the Prosecutor’s Office has the duty and authority to participate and be active in the process of truth seeking and reconciliation in cases of serious human rights violations and certain social conflicts. This article clearly contradicts the Procedural Law of the Serious Human Rights Court as regulated in Law 26/2000 which states that the Attorney General acts as an Investigator and Public Prosecutor in cases of serious human rights violations. In addition, Article 47 of Law 26/2000 also stipulates that settlements outside the Human Rights Court (non-judicial) are carried out by the Truth and Reconciliation Commission (KKR) which will be formed under a separate law and not under the authority of the Prosecutor’s Office.

Second, our note regarding the draft of the Prosecutor’s Bill is that the Attorney General’s Office has the authority to conduct wiretapping outside the criminal justice system (SPP) as stated in Article 30C letter k. Wiretapping is a limitation on constitutional rights, therefore it can only be done in the judicial process. Even in the judicial process, wiretapping can only be carried out by investigators, not prosecutors, and even then with the permission of the Head of the District Court as a check and balance mechanism so that there is no abuse of authority. For example: in the Narcotics Law, wiretapping by the BNN is carried out after obtaining permission from the Head of the District Court, while in the Intelligence Law, wiretapping by the BIN is carried out by the stipulation of the Head of the District Court, and in the 2019 KPK Law, wiretapping must obtain permission from the Supervisory Board with members chosen by the President. Therefore, wiretapping outside the SPP cannot be justified and violates the guarantees, protection and legal certainty regulated in Article 28D of the Constitution.

Third, Article 30B outlines the authority of the Prosecutor’s Office in law enforcement intelligence. Intelligence is not a function that can simultaneously execute or enforce the law. This Article repeatedly mentions the authority of the Prosecutor to “secure” the implementation of development and “secure” legal policies. As a law enforcement officer, the Prosecutor’s Office should enforce the law by implementing the law, not safeguarding or guarding policies and development.

In addition, “Security” in practice is used to arrest and detain someone without requiring the apparatus to comply with the provisions for arrest and detention regulated by the Criminal Procedure Code, without reason for arrest, without notification of the family or lawyer and without court oversight mechanism. So that without a strict definition, “security” will only become a space for the abuse of authority and violations of human rights.

Based on these matters, we urge the DPR not to support the impunity that is systematically planned by the Government and not to approve the revision of the articles mentioned above.

« INDONESIA: A Mama Shot in Intan Jaya, Proves that the Government Failed to Protect Womens’ Rights to Security in Papua

SRI LANKA: Appeal to help build a house for family of disappeared »