This theory was applied in the Mohmand Agency in the border areas of Federally Administrated Tribal Areas (FATA), uniformed security forces have: destroyed crops, arrested local people under an abolished law and cut off all sources of communication, including the Internet and cell phones. 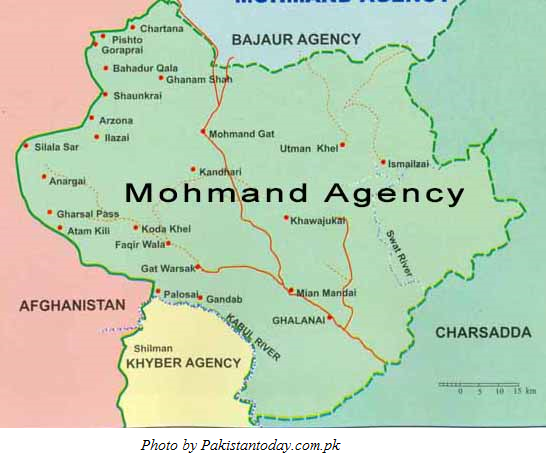 FATA’s political administration, on commands from the military, has ordered the local people not to grow maize and other crops in view of continued cross-border terrorism. The administration says that the maize stalks are taller than the height of a man, thus providing excellent shelter for the terrorists. One of the major crops in the hilly areas in FATA is maize, which is also used for fodder. Fields are small in size and built on the slopes of the mountains. The majority of the rural population depends for their living on forestry and livestock.

The decision to destroy crops and forestry will affect more than half a million people in the Mohmand Agency. It will rob them of their main sources of livelihood. The Mohmand Agency, a district in the Federally Administered Tribal Areas of Pakistan was created in 1951. It is close to the Afghan border but not at the border.

To implement the decision, security forces have destroyed agricultural lands, crops, and forests in search of the terrorists. FATA’s administration made these claims to the local media. Frontier Constabulary (FC), have arrested many farmers and their family members for not obeying their orders. Arrests were made under the Collectively Responsibility Act, which was abolished in 2011.

The residents of FATA organized a protest demonstration on April 1, at Peshawar, the capital of Pakhtun Kha Province. They were protesting the arrests of tribesmen under the Collective Responsibility clause of Frontier Crimes Regulation (FCR), abolished in 2011. Anguish was expressed over suspension of the Internet and cell phone service in the Mohmand Agency. Their area has been disconnected from the whole country.

After instructions from political agents in most parts of FATA, security forces descended upon forests, cutting down trees and planting all types of herbs, shrubs and trees. This was carried out in an area where the State has not provided electric or gas facilities for the farmers. All the major trading routes leading to the Durand Line, dividing Afghanistan and Pakistan, have closed down. The pretext cited was the free movement of suspected terrorists.

FATA people are not even allowed to grow maize inside their own compounds. If anyone is caught growing the plants, they are treated roughly and arrested. The economy is chiefly pastoral due to the tribal nature of the society. Being a mountainous area, only ten percent of the land is arable. The majority of the rural population depends on forestry, livestock, and crops (rice, wheat, maize). However, the parallel, informal economy, based on the trafficking of opium, continues. No need to point out, that security forces are happy with such business!

FATA is found lacking in almost every denominator of civil society. A few examples follow: there are no banks (in the modern sense of the term) in the area; there is no adequate infrastructure to support sustainable means of transportation; no estimable developments in the fields of education, health, energy or agriculture for the last sixty-three years since Independence.
Denying people their sources of livelihood, under the garb of terrorism, is the brainchild of a military mindset that failed to control terrorism in the country. Despite claims that Pakistan has a powerful army and is a nuclear country, it still fails in the fight against terrorism. According to government figures, more than 80,000 security forces and civilians were killed due to terrorists’ acts since the start of the war against terrorism after 9/11.

Instead of controlling terrorism, the military has increased its interference in civil affairs. In reality, it runs a parallel government. It has forced legislators and the civilian government to set up military courts for the execution of alleged terrorists. The numbers of extra-judicial executions and disappearances were conducted by the military, the Rangers and the paramilitary forces—all with complete impunity.

Now, it has turned its guns towards the poorer populations, already denied their basic rights to a decent life. The military is leaving the tribal population with no options but to shift towards terrorism. It particularly affects the youth.

The Asian Human Rights Commission urges the government of Pakistan and international communities. Please take particular notice of military actions in tribal areas in the name of combating terrorism. The government must immediately stop the destruction of maize and other crops including the cutting down of forests. Communication systems must be restored. Do not push the local population towards a terrorist way of life. Bring to an end decisions by the military which deny people their sources of livelihood.

The government is responsible at all times to provide for the basic needs of FATA, particularly the people of the Mohman Agency. Provisions for electricity and gas facilities and the Internet must be assured.

INDONESIA: Accused thief detained and tortured to death by the Kendari Police »