Home / News / PHILIPPINES: ‘Wheel of torture’ is tip of the iceberg

PHILIPPINES: ‘Wheel of torture’ is tip of the iceberg 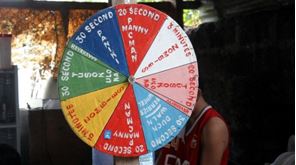 The discovery of a ‘torture wheel’ “inside a private subdivision in Laguna,” which is under the control of intelligence officers in Biñan, Laguna, where detainees arrested for illegal drugs are tortured and held, drew outrage as to how the police conduct its investigation into crimes.

The “torture wheel” was discovered by the Commission on Human Rights (CHR) after conducting onsite inspections of the detention facility. The facility, however, was not included in the list of official detention centres; and, in fact, its operation reportedly surprised the Philippine National Police (PNP). The facility is “never included in the regular status reports of all police custodial and detention centers.”

With the discovery and exposure of this practice, the Asian Human Rights Commission (AHRC) expresses its appreciation to the CHR for investigating and conducting the onsite inspection. On this occasion the CHR went out of its way by investigating promptly and effectively into the complaints of torture.

The CHR’s investigation was in response to complaints received by the public attorney attached to the Public Attorney Office (PAO) in Laguna. The PAO lawyers filed the complaint with the CHR based on the allegations of torture by victims detained by the intelligence officers and policemen.

In this case, the CHR’s action was exceptional in comparison to the previous experience of the AHRC when it had failed to investigate promptly and effectively—on some occasions delaying its investigation for months; or, in some cases by not conducting investigations into complaints of torture at all.

The AHRC is not surprised by the discovery of ‘torture wheel’. In fact, if the CHR could fully guarantee security and safety of victims, witnesses and complainants, the AHRC would be willing to assist the CHR by identifying places where suspected criminals, mostly children, are held in “torture chambers.” These places are, obviously, not listed by the police as official detention centres. Indeed, the AHRC fears that unlisted facility is by no means exceptional.

The AHRC urges the CHR to look into these detention facilities which neither the police nor the military have declared officially, as required by the Anti-Torture Law. All over the country, persons held and deprived of their liberty are tortured in de facto, informal and unlisted detention facilities.

The AHRC urges the government of the Philippines to immediately take action to stop the use of the ‘torture wheel’. The government should act in close cooperation with the CHR to investigate how such a practice could have been adopted by the relevant law enforcement agencies. The originators of the practice of the ‘torture wheel’ should be identified and appropriate action should be taken against them. Such a practice could not have emerged without the high ranking authorities who are in charge of the agencies which introduce this practice.

In communities, police torture detainees, no longer inside police station, but in houses near police stations or in moving vehicles. The purpose of this is first, to avoid detection; and second, severe any form of official accountability;

In military camps and headquarters, the army justifies detaining persons on the pretext of ‘national security’, ‘high risk detainees’, and in many of its camps, notably in places where it is fighting counter insurgencies. Legally, soldiers neither have the power to investigate nor detain persons—however, the police, prosecutors and the courts, consent to this ongoing abuse thereby putting detainees at high risk.

In the village and communities, the barangay (village) police turn the village halls into torture chambers, even torturing persons, including children, in full view of the villagers by dipping them into drums full of water, electrocuting them, and so on. Some are shot dead. In fact, there are reports of this happening in the heart of Metro Manila.

These are many just some of the many cases.

Therefore, we urged the CHR to take this opportunity to demand, from the police, the military and public officials, full disclosure of places of detention where persons are deprived of liberty, and are at risk of torture. To make this work, the CHR must also provide full guarantee of protection and safety to any victims, witnesses, complainants and organisations helping torture victims who are willing to come forward.

« SRI LANKA: Will the Bar Association submit to the proposal for Case “Mismanagement”?