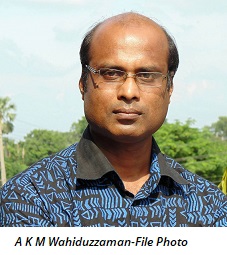 Reputation for exercising freedom of expression costs the termination of a teacher’s job at the National University of Bangladesh (NUB). The NUB dismissed its Geography Department’s Assistant Professor, A.K.M.Wahiduzzaman, on 10 September 2020 for criticizing Prime Minister Sheikh Hasina. The NUB had referred a backdated Syndicate Meeting held on 2 September. This dismissal was executed illegally as cyber-crime cases are still pending trial in the Courts. Moreover, the NUB has not paid overdue financial benefits to Wahiduzzaman until now from his temporary suspension on 7 November 2013.

The NUB temporarily suspended A.K. M. Wahiduzzaman on 7 November 2013 since he was detained in a cyber-crimes case for an alleged Facebook post in August 2013. However, the Police authorities and the complainant’s lawyers have consistently failed to put forth any substantive evidence.

One A. B. Siddiqui is a self-acclaimed professional complainant. As President of the Bangladesh Jananetri Parishad, he filed a General Diary Entry (GDE number: 494) against Wahiduzzaman on 11 September 2013 with the Rampura Police Station of Dhaka. Siddiqui’s sole occupation in life is to register complaints against the critics of Prime Minister Sheikh Hasina. He uses the opportunities of filing cases against people, to draw Sheikh Hasina’s sympathetic attention, for earning a living and becoming a Member of Parliament in the future.

The alleged trumped-up cybercrime case triggered arbitrary detention of Wahiduzzaman in prison for one month and torture in judicial custody on 6 November 2013 – resulting in persistent health problems. One barely educated man’s dream for earning a living and securing a parliamentarian position, by benefiting an authoritarian regime through a short cut, is undeservingly entertained by the criminal justice mechanisms of Bangladesh.

The dismissal of A. K. M. Wahiduzzaman from his position as Assistant Professor of the National University of Bangladesh indicates the massive collapse of the country’s Institutions. This includes Universities that are supposed to function as autonomous bodies under the law of the land. It also indicates the abysmal stature that dominates the intellectual sphere of interest in the country.

A. B. Saddiqi accused Wahiduzzaman of allegedly making the following sarcastic comments about the education of the children of Prime Minister Sheikh Hasina:

“TV scrolls with large capital letters show Sajeeb Wazed Joy as the son of the Prime Minister and an IT specialist. Earlier, it showed Saima Wazed Putul, daughter of Sheikh Hasina, as an autistic specialist. Joy had in turn become an IT specialist after completing studies in public administration and through giving some power-point presentations. Putul has become an autistic specialist by rearing her own autistic child. In addition, the mother, Sheikh Hasina, owns a dozen and a half doctorate degrees and laughs at this complete scientific family. It is fortunate that the father, who was a real scientist, need not see this school of scholars.”

Wahiduzzaman surrendered before a High Court Bench to seek anticipatory bail. The High Court, on 10 October 2013, granted anticipatory bail for four weeks; ordered him to appear before the original CMM Court where the complaint was filed; and directed the Police not to arrest or harass him during the period of four weeks.

On 6 November of that year, Wahiduzzaman surrendered before the CMM Court. His lawyer argued that the alleged Facebook post referred to in the complaint was a fake one. It could be proven if a credible investigation was conducted. However, the Magistrate ordered Wahiduzzaman to be detained in prison. In the afternoon of the same day, after the Court hearing, Wahiduzzaman was detained in a judicial cell at the CMM Court building, prior to transportation to the Dhaka Central Jail. Some six plain-clothes-men came to the cell where Wahiduzzaman was the only detainee at the time. They instructed the Police sentry to open the cell, which the Police did instantly. The plain-clothes-men then brutally tortured Wahiduzzaman in his cell for about 15 minutes, using their fists and kicking him before leaving. His neck was seriously injured. Without allowing any access to medical treatment, the Police transferred Wahiduzzaman to prison. He was released from the prison on 5 December 2013, late at night, after a High Court Bench granted him bail on 24 November.

Meanwhile, on 7 November 2013 – the day following Wahiduzzaman’s detention in prison, the National University temporarily suspended Wahiduzzaman from his position as an Assistant Professor of Geography.

The Police, on 10 February 2014, submitted a ‘Charge Sheet’, which is commonly referred to in Police investigation reports brining charges against the defendant. In it, they accused Wahiduzzaman with regards to a pending criminal case against him in Bangladesh, for ‘publishing fake, obscene or defaming information in electronic form’. On the same date, a High Court Bench granted him one-year of interim bail. The High Court, on 25 February 2014, stayed the proceedings of the case, as the lawyers of the complainants failed to produce the original location of the alleged Facebook post upon which the complaint was based. Since then the case of the alleged Facebook post remains pending before the Cyber Crimes Tribunal of Dhaka.

The story of this State-sponsored persecution against Wahiduzzaman did not end there, according to A.K.M. Wahiduzzaman in an exclusive interview with the Asian Human Rights Commission. Having the cyber-crime case stayed by the High Court, Wahiduzzaman made himself available to join the NUB to continue his duties as an Assistant Professor of the Department of Geography. The authorities of the NUB refused to let him restart his job at the University. Instead, they cited that there were pressures from ‘higher authorities’ not to let him continue in his job and warned him about further consequences. Subsequently, Police Sub-Inspector Md. Jamal Hossain of the Rampura Police Station used the same GDE (No. 494) as a reference. He registered a First Information Report (FIR) citing a Court Order of ‘taking legal action’ passed on 13 February 2014. Wahiduzzaman approached to the High Court again to seek remedy against the second cybercrime case on the same allegation. Judge Nizamul Haque Nasim, who was the senior Judge in a Division Bench of the High Court, scolded him during the hearing and defended the police saying, “Do you think the police are ignorant and have submitted the charge sheet without knowing the truth?” Judge Nizamul Haque Nasim clearly stated in the open Court that there would not be any judicial remedy for his writ petition. Subsequently, Wahiduzzaman’s lawyer took back the writ petition as if it was not submitted before the Court.

The High Court Judge’s threatening message and refusal to provide remedy compelled Wahiduzzaman to realise that there were imminent threats to his life and liberty. He went into hiding until he was able to leave Bangladesh in May 2016, surviving in exile in Malaysia.