Home / News / PAKISTAN: The lives of the long marchers are in danger

PAKISTAN: The lives of the long marchers are in danger 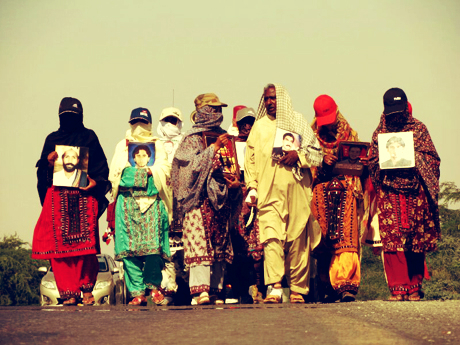 The participants of the long march from Karachi to Islamabad for the recovery of Baloch missing persons are facing threats from the notorious intelligence agency, the ISI. The marchers have been threatened not to enter Punjab province otherwise they would face serious consequences.

The ruling political party, the PML-N is based in Punjab and they also have governments in the federation and the province. Punjab province has always remained the ruling province of the country and has never allowed the other provinces to have rights on its resources. The domination of Punjab and its elite class were the cause of the separation of Bengalis from Pakistan when Punjab and the Pakistan army, which is mainly consisted of Punjabi ethnic groups, refused to hand over power to the Bengalis after the general elections of 1970 which resulted in the killing of more than three million Bengalis and the rape of thousands of women.

As the marchers left the last city of Sindh province, Kashmore, the threatening calls from government officials of Punjab and the intelligence agencies started coming in; demanding that the marchers do not to enter Punjab province and warning that the police would strongly resist them. Yesterday, January 20, when the long marchers, including women and children led by Mama Qadeer Baloch, was walking on the main national highway towards Rojhan Mazari, two pickup jeeps arrived. On one jeep “Pakistani Afwaj ko Salam” (salute to Pakistan Armed Forces) was written and the other (a blue coloured double cabin) was occupied by four persons in civilian dress. The blue double cabin stopped, called over the two policemen who were escorting the long marchers and introduced themselves as the officers from the ISI. They asked the officers to convey the message that the protest march must be stopped and must not go further towards central Punjab, the recruiting centre of the Pakistan army. 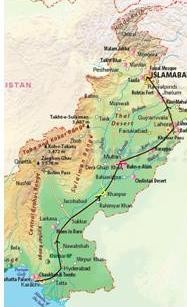 The double cabin vehicle bore registration number of RIL 4953, which was registered in Islamabad, and came especially 700 kilometers to deliver the message from the state that they are not happy with the protest for the recovery of missing persons. The policemen conveyed the message to the participants while the four persons waited for the reply. When they found that it was negative they alighted from the double cabin and introduced themselves as officials from the ISI. In a threatening tone they said the military and the government was not happy with the march and would not allow it to go through the Punjab province. When the participants and their leader, Mama Qadeer, replied in unequivocal terms that they were not afraid of any threat and that they would continue their march, the intelligence officials told them they would face serious consequences. They warned that the police could resort to a baton charge first and then other ‘methods’ to stop the Long March.

Later that evening many further calls were made by persons claiming to be from military intelligence, warning the protestors to wind up the long march.

The long march has been started on December 14, from Karachi Press Club to Islamabad, a total distance of 1,400 kilometers. Before this it had completed a distance of 730 kilometers from Quetta, capital of Balochistan to Karachi. The Voice of Baloch Missing Persons (VBMP) has organized the 20 members of the Long March which consists of women, children and men and has mobilized thousands of others to join their march. Mr. Mama Qadeer (70) is leading the Long March which has now reached the city of Rojhan Mazari and is heading towards the city of Rajan Pur, southern Punjab province. The long marchers have completed a total distance of 700 kilometers of this leg of the march on foot, halfway to reaching to its final destiny of Pakistani capital of Islamabad.

The Asian Human Rights Commission urges the government to stop the ISI and other state intelligence agencies from threatening the long marchers. If the ISI take strong action, as they have threatened, the situation in Balochistan will come under the control of the federation and this in turn, will lead, not only to the distabilisation of Pakistan but also the fragile democracy in the country. The government must be reminded that the smaller provinces will stand with the people of Balochistan if such nefarious steps are taken.

The Asian Human Rights Commission once again appeals to the civil society groups to turn out in large numbers in support and solidarity with the marchers against the impending crack down by the state. A significant show of support will thwart the evil designs of the Punjab government and the intelligence agencies to hamper the marchers and weaken their fierce resolve to protest for the success of their mission for the recovery of their loved ones and the ceasing of extrajudicial killings. A clear message must be sent to the ISI and military intelligence that true democracy demands that people be given the right to protest.

« NEPAL: Mother and a daughter severely tortured by police officers