Home / News / INDONESIA: The Visit of the UN High Commissioner for Human Rights Should Bring Changes

INDONESIA: The Visit of the UN High Commissioner for Human Rights Should Bring Changes

The Asian Human Rights Commission (AHRC) deeply appreciates the visit to the Republic of Indonesia of Mr. Zeid Ra’ad Al Hussein, the UN High Commissioner for Human Rights. It took place between 4 to 7 February 2018. As a regional human rights organization in Asia, we work closely with our partners and various civil society groups in Indonesia. We expect that your visit will bring changes and enhance the protection, fulfilment and promotion of human rights in Indonesia. The AHRC is also thankful that the UN High Commissioner for Human Rights is willing to send a mission to visit Papua and the West Papua Provinces to learn and see further human rights situations on the ground. We welcome this progressive diplomacy. Accountability is urgently needed. The AHRC has already described and highlighted the human rights situation in Indonesian, including PAPUA in our Open Letter on submission on criminal justice reform and human rights. 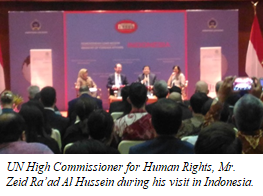 The AHRC is grateful to the Indonesian Government for giving and providing open access to the large civil society (human rights groups), victims and the families of victims of various human rights cases. There wasdirect dialog and communication with the UN High Commissioner for Human Rights, Mr. Zeid Ra’ad Al Hussein during his visit inIndonesia. We note that Government openness is an important milestone, which should be immediately followed up with a concrete policy and program on the enhancement of human rights standards in Indonesia.

Therefore, we do hope that the Government of Indonesia is not merely interpreting the visit of the UN High Commissioner for Human Rights as normative and ordinary diplomacy. The Government should knowingly consider that human rights must be incorporated and included in every Government policy, particularly those related to national development. It is common knowledge that since President Joko Widodo’s inauguration in October 2014, development of infrastructure and the economy is his major concern. In the last two years, massive infrastructure developments such as roads, ports and airports have been constructed in various provinces of Indonesia, including Papua. Under President Joko Widodo, the Government issued Presidential Decree No. 3, 2016 regarding strategic projects. This encompasses the following: 52 railway projects, 19 train projects, 17 airport projects, 13 port projects, 10 clean water projects and 60 reservoirs.

Ensuring that human rights are included in the Policy of Development is very important, as development will be nothing without human rights. The UN High Commissioner for Human Rights stated this in his opening remarks:

“As I said at the Jakarta Conversation Regional Human Rights Conference on Monday, development can certainly bring with it access to fundamental services and goods that vastly improve many people’s well-being. But, if they cannot voice their concerns and participate in decisions, the resulting development may not increase their welfare. I urge the Government of Indonesia and the corporations involved in the extraction of natural resources, plantations and large-scale fisheries, to abide by the UN Guiding Principles on Business and Human Rights by ensuring that business activities are not carried out in violation of people’s rights.”

However, to date, we have not seen the Government incorporating human rights in its Policy on development and economic investment. There are instances of human rights violations which occurred while the Government was pushing these massive developmental projects: 1# Development of New Yogyakarta International Airport in Kulon Progo Regency; the development of the Airport continues despite lack of an environmental permit and with rampant violence (for further chronology: AHRC-UAC-202-2017); 2# Development of the West Java International Airport (BIJB) in Kertajati, West Java Province. Ten villages in Kertajati sub-district had been effectively dispossessed to facilitate the development of the West Java International Airport. (For further chronology: AHRC-UAC-148-2016); 3# Development of Geothermal Power Plant (PLTPB) conducted by the Sejahtera Alam Energy Company which operates in Slamet Mountain, Central Java Province. Despite massive protests from environmental activists and local communities and demands to protect the environment in Slamet Mountain, the Government, in particular the Police, did not address the matter. The Police forcibly dispersed a peaceful protest, arresting 24 protesters (for further chronology: AHRC-UAC-195-2017).

In addition, the AHRC also received information that land conflict is still dominating a number of human rights violations in Indonesia. We take as reference the data of the Indigenous People’s Alliance of the Archipelago (AMAN), a national human rights organization. In 2017 the number of land conflict cases was 659 and resulted in 261 indigenous people being criminalized.

To enhance its stance, the Government should re-evaluate its policy priorities on human rights cases which remain unaddressed until now. Past human rights abuses which took place under former dictator Suharto remain unresolved. Consider the 1965-1966 Massacre. Although there has been some information related to the case, such as the US Embassy Document on the alleged involvement of the Indonesian Army, it has not been ultimately taken into consideration. Religious intolerance needs to be recognized and resolved. Minority religions and beliefs must be treated equally. The investigation into the murder of Munir Said Thalib, a prominent human rights activist, poisoned by an agent of the Indonesian Intelligence Agency (BIN) remains at a standstill. Included must be current development in the human rights situation in Aceh and other Provinces. They must be the main priority that the Government deals with.

Therefore, the AHRC is calling for the Indonesian Government to open access to the UN High Commissioner for Human Rights, especially his special, mission visit to Papua. We should like to emphasize that President Widodo’s administration critically implement recommendations of the latest Universal Periodic Review (UPR) of 2017. Government needs to review all of its regulations, both local and national. They must ensure that the regulations are not in violation of International Human Rights Standards. Indonesia is a state party to key international human rights Treaties. Government should be acutely aware that human rights are part of their obligation within the Duty of Care for their citizens. It is mandatory that Government fulfils this duty. Human Rights should not be treated simply as a tool of diplomacy to protect the image of Indonesia in the international forum of relationships.

« INDONESIA: Opening remarks by UN High Commissioner for Human Rights Zeid Ra’ad Al Hussein at a press conference during his mission to Indonesia