PAKISTAN: A pocket size hand book on torture is launched 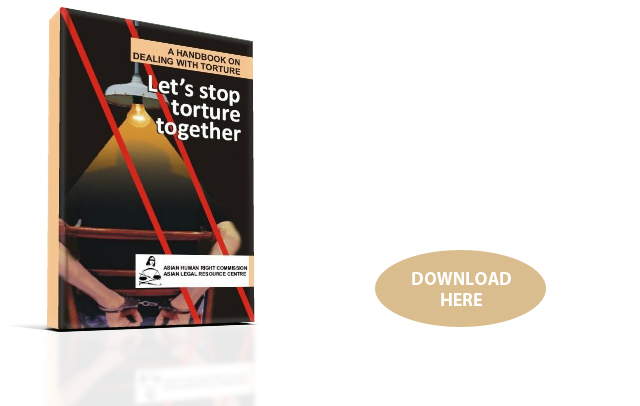 The Asian Human Right Commission and Asian Legal Resource Centre has developed  a handbook on torture titled “Let’s Stop torture together” the book is first of its kind in South Asia to have reached out the victims directly and to help them cope with the aftermaths of torture and how to seek legal redress. Our research titled “Custodial torture its ramifications and failure of institutions” reveals that torture victims are often unaware of their legal rights. The victims of torture generally belonging to low income strata and has little insight into the complexities of the criminal justice system. Almost 75% of the people surveyed said that they complained of torture to their lawyers but either they lawyer advised them to stay quiet or didn’t report the case to the magistrate. Even complaint to the magistrate fell on deaf ears.

One of the problems that causes torture to continue unabated. A need was felt for     an easy reference book that will help victims of torture to know their rights and assist them to seek redress. The handbook will help the government authorities and other stake holders in implementation of UN CAT provisions in the country and prisons and will in the long run help in eradicating the menace.

The book is divided into three parts each is dealing with medical, psychological and legal recourse available to the victims respectively. The book is designed in a self help style, listing avenues that will help the victim in seeking justice. At the end of the book an index is provided that lists the numbers of medical practitioners, lawyers, psychologist and NGOs who provide free aid for the victims.

A four member team worked to develop the manual with illustrations. The team consisted of Dr. Ezze Rukhshan, a graduate from Dow Medical University with a keen interest in forensics. Ms. Sualeha SheKhan, social scientist has a range of interests including mental health, and feminism. Advocate Ms. Javeria Younes, a social activist who endeavours for an egalitarian free society from torture. Her research “Custodial torture its ramification and failure of institutions” has been published. Illustrator, Ms. Tajjali Zubair, is fresh graduate from Karachi School of Arts.

The AHRC expects that the manual will be a useful tool for the victims as a guide to civil society organisation, lawyers, doctors and judges to help them deal with the cases of torture.

The AHRC hopes that the manual could be reproduced by the civil society organisations in the region, with adjustments required to incorporate medico-legal procedures in other countries, to be used extensively in the region.