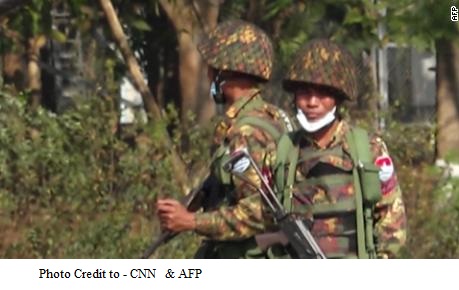 The military coup in Myanmar, deposing the legitimately elected Government previously led by Aung San Suu Kyi, has come under global condemnation. Antonio Guterres, the United Nations Secretary-General, also expressed grave concern. “This development represents a serious blow to democratic reforms in Myanmar”. The Secretary-General has urged the Military leadership to respect the will of the people of Myanmar and adhere to democratic norms.

The will of the people was expressed clearly in the general elections held on November 8, 2020. Eighty-three percent (83%) of the people voted for the National League for Democracy (NLD) previously led by Aung San Suu Kyi. In this election, more voted for the NLD than during the 2015 Parliament election.

This massive mandate put forth by the people, strengthened Parliament’s capacity to engage in far-reaching democratic reforms – more so than in the previous period in 2015. While local and international pressure forced the Military Regime (in power from 1962) to agree to democratic reforms, the Military was only willing to allow very limited reforms. In this way, they could keep their grip on power in order to prevent any significant changes which would undermine the favorable position of the Military.

The people of Myanmar have clearly expressed their wish for greater power to be given to the Parliament for much-desired changes. However, the Military seems to be engaged in an exercise to subvert the possibility of such changes.

The Military first engaged in a massive campaign on November 8, 2020. They stated that the results of the November 2020 elections were influenced by electoral fraud. The allegations made were quite similar to what Donald Trump claimed after his defeat in the last Presidential elections. Donald Trump went further on January 6, 2021. He attempted to unleash allegations, in Washington, to create chaos. It was an attempt to prevent President Joe Biden’s new administration from taking power.

In Myanmar, however, the Military was able to arrest the newly- elected Party leader Aung San Suu Kyi, the President, and other leaders and supporters of the National League for Democracy. They then took over power for themselves. Observers have predicted that the Military move to take back power will lead to an extremely dangerous and perilous situation for Myanmar.

The Court System in Myanmar was transformed to serve the interest of the Military, fundamentally destroying the entire system of the administration of justice. The entire institutional infrastructure was transformed to create a machinery of repression that would suppress all struggles for democracy and the Rule of Law – in favor of a Military Rule. As a result, a nightmarish situation was created for the people of Myanmar. Benefits went to a group of the military elite who would use all the resources in Myanmar for their personal enrichment. In short, the Military had destroyed the political, social, and economic structure of the nation and pushed the Myanmar people into extreme poverty and powerlessness.

Notwithstanding, the people of Myanmar continuously and relentlessly fought for their rights. They were able to gain two things: first came recognition from the international community and second came global sympathy against the oppression they were facing under the Military Group. As a result of massive pressures that were generated in this process, the Military was forced to come to terms with the demands for change. However, they did so only to the extent that they could ultimately control and limit the democratic reforms.

Elections held in November 8, 2020, altered this landscape. The possibilities of Parliament asserting its power to strengthen democracy and the Rule of Law became quite visible.

The coup is in retaliation against such change as mentioned above. Given the people’s will to have variations, the Military could achieve its aim only through the massive use of violence, including bloodshed. Thus, the people of Myanmar are once again facing a serious threat to their very survival as a democracy.

Unsurprisingly, people have already begun to be distressed to the point of resistance. THEY DESERVE WORLDWIDE SUPPORT.