Three days ago, two human rights activists campaigning for one of the candidates contesting the national election received a message sent by an opposing candidate. The message arrived in the form of the heads of two freshly slaughtered dogs. This message is symbolic in more ways than one. It represents what has gone radically wrong in Sri Lanka. 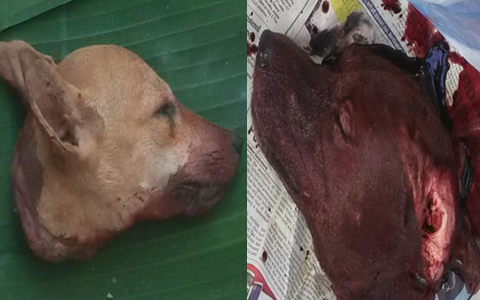 An election is a contest between parties and, naturally, the parties have entered the race to win. Now, what do the contending parties want to win in an election? They seek to win the right to represent the people. An election is a civilized way of deciding who will have the legitimate right to represent the people. Being a civilized activity, all parties have to acknowledge the right of the contenders to engage in the contest. It is implicit that each party acknowledges the rights of various people to make their choices and to support a candidate of their choice. However, if these acknowledgements are absent, there is no civilized contest. And, if there is no civilized contest, there is no real election. And, this could mean that one of the contestants want the contest to be unfair, or even altogether fake.

In the present context, it is incumbent President Mahinda Rajapaksa who officially declared that he wanted to contest. Did he intend to have a civilized contest? Was he looking for a fair election, to confirm his right to represent the Sri Lankan people? Or did he intend to have a fake election from the start?

By sending the severed heads of dogs, President Rajapaksa has clearly indicated that he did not mean to have a real contest. What he wanted was a fake contest, which he could use to claim legitimacy to rule.

However, it appears, what was supposed to be a fake contest has snowballed into a real contest. And, it is this transformation that reveals happenings across Sri Lanka in the name of campaigning and preparing for the election, including the delivery of dog heads to supporters of the primary opposing candidate.

The heads of slaughtered dogs are thus symbolic of the Sri Lankan political reality. Elections, and all other associated actions of a parliamentary democracy, are upheld in neutered forms to engineer a deception. The regime rules via severed dog heads, i.e. through violence, and threats of violence.

The 1978 Constitution ushered in this fake democracy. Some persons have recently claimed that a majority of countries across the world have an executive presidential system similar to that of Sri Lanka. This is a falsehood. There is no country in the world that has the kind of fake democracy that exists in Sri Lanka. At the very inception of the 1978 Constitution, Dr. Colvin R. de Silva pointed out that the idea of this Constitution had been borrowed from the Central African Cannibal Dictator Jean-Bédel Bokassa.

The United States has a presidential system but what this system also possesses is an extensive democratic institutional framework to control and keep the President within the framework of the rule of law. Transgression of any of these rules subjects the US President to punishment as any other lawbreaker.

The French system of presidency is the same. The modes of control over the presidency and the particular institutional frameworks may be different. However, the French President is bound by law. If the President breaks the law, he or she is treated as an outlaw. The principle is the same as that in the US.

What makes the 1978 constitutional framework in Sri Lanka a radical wrong is that it has been created in a way that defies all principles of democracy that have been established over centuries of great struggles.

There is nothing that may be termed great in the 1978 Sri Lankan Constitution. What it possesses and symbolizes is the opposite. It has provided a haven for a particular form of governance to take seed and flourish. The kind of governance symbolized in messages involving slaughtered dog heads. In the 1978 to 2014 period, in fact, it is not these dog heads, but the actual heads of men, women, and children that even better reflect the kind of rule Sri Lanka has had.

In the immediate wake of the 1977 election, the Sri Lankan police were given a “holiday”, so that revenge could be taken on the opposition to the government. That revenge was intended to create the intimidation necessary for any future opponent who would dare to challenge the government. Throughout the 1980s and 1990s severed human heads appeared all over the South, the North, and the East of the country.

The nature of the actual system of governance that continues to exist in Sri Lanka since 1978 has once again been demonstrated in those opposing President Rajapaksa’s re-election and the 1978 constitutional system being sent severed dog heads. Alas, opposition to this system should have arisen from the very first day of its introduction. It will remain a scar on the political intelligence of the Sri Lankan people for all time – the failure of the people to oppose this system from its very inception.

About AHRC:The Asian Human Rights Commission is a regional non-governmental organisation that monitors human rights in Asia, documents violations and advocates for justice and institutional reform to ensure the protection and promotion of these rights. The Hong Kong-based group was founded in 1984. Read this Statement online

ASIA/PAKISTAN: Formation of military courts not a solution but an illusion »