Today, January 4, is the death anniversary of former Governor of Punjab Province Salman Taseer, who was killed in broad daylight by his own bodyguard in 2011, for appealing for the pardon of a Christian woman, Asia Bibi, who had been sentenced to death for allegedly insulting Prophet Muhammad.

After his assassination, Salman Taseer’s family continues to face the wrath of Islamic fundamentalists. His elder son, Mr. Shabaz Taseer, was abducted by the Taliban; he was only recovered later after remaining captive under the Taliban for four-and-a-half years.

And, now another son of the same ill-fated family, Mr. Shan Taseer, has been targeted for posting a message on Facebook in which he criticized the nation’s blasphemy laws and voiced his support for its victims Nabeel Masih and Asia bibi. In his video message Shan has beseeched all Pakistanis to pray for victims of the draconian blasphemy law. 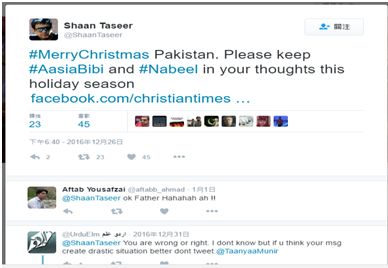 A police case has been registered in Islampura Police Station, Lahore, on the grounds of “hate speech” because of his Christmas greetings and for him requesting fellow countrymen to pray for minority members being exploited by, what he called, the “inhumane blasphemy law”. The case was registered under Section 295 A of Pakistan Penal Code, which states:

“Whoever, with deliberate and malicious intention of outraging the ‘religious feelings of any class of the citizens of Pakistan, by words, either spoken or written, or by visible representations insults the religion or the religious beliefs of that class, shall be punished with imprisonment of either description for a term which may extend to ten years, or with fine, or with both.”

According to media reports, an FIR has been registered at Islampura Police Station against an “unidentified” man in the video that was found in a USB in a parcel outside the Police Station. Since they don’t know who the person was, they have therefore named an unknown person in the FIR.

After writing messages on Twitter and Facebook, Shan Taseer, started receiving death threats, asking him to prepare for his death. According to Shan Taseer, the Sunni Tehreek, a fundamentalist Muslim organisation – the complainant in the case – has told their supporters to prepare another Mumtaz Qadri, “They are sending me Mumtaz Qadri’s photos with messages that there are several Mumtaz Qadriswaiting for me,” he said.

Mumtaz Qadri, the assassin of the former Governor, was sentenced to death, and he became the hero to fundamentalists for killing a “blasphemer”.

The police, knowing that no case can be made out against Shan, and in order to appease the angry fundamentalists, has had to file the case against an “unknown” person. This has further infuriated the Sunni Tehrek – who have threatened the State that if a case is not filed against Shan by 4 January 2017, the group will stage a public protest.

The Taseer family has supported repeal of the blasphemy law and has raised voice against the atrocities meted out to the religious minority even at the cost of their lives. Shan is the latest target of fanatics.

Pakistan’s blasphemy laws, the notorious Section 295-A, violate the right to life; freedom of thought, conscience, and religion or belief; and freedom of opinion and expression. While it purports to protect religious sentiments – mainly those of the Muslim majority – it allows Muslim accused of blasphemy against other religion to go scot-free.

According to a report by Amnesty International titled “As Good As Dead”: The Impact of the Blasphemy Laws in Pakistan,

“Pakistan’s blasphemy laws violate its international legal obligations to respect and protect the rights to life; freedom of thought, conscience, and religion or belief; freedom of opinion and expression; equality before the law; and the prohibition on discrimination. The laws are vaguely formulated, and enforced by the police, prosecutors, and judiciary in proceedings that often violate the right to fair trial, including the fundamental principle of presumption of innocence. The laws have been used to bring criminal charges against people without the intention to commit an offence, including people with mental disabilities, and children.”

Traditionally blasphemy law has been used by the State to rein in potential political opponents, seculars and political dissenters. The non-State actors such as Sunni Tehrek, Ahle Sunnat Wal Jammat (ASWJ) and other fundamental religious groups are abetted and supported by the State to curb free speech.

Many accused under the blasphemy law are not granted bail until their appeals are heard before the appellate courts. Several victims have spent years incarcerated, as they can’t afford a lawyer. Many lawyers themselves complain that they are scared to defend cases involving a blasphemy accusation fearing dire repercussions from fundamental groups.

“The Majority of blasphemy cases are based on false accusations stemming from property issues or other personal or family vendettas rather than genuine instances of blasphemy and they inevitably lead to mob violence against the entire community.”

The crack down on hate speech that was envisaged under the National Action Plan (NAP) has merely been limited to non-Muslims, particularly Ahmadis and Christians. The blasphemy law has legitimized mob violence, vigilantism, and persecution of minorities and intellectuals.

At least 65 people, including lawyers, defendants, and judges, have been murdered over blasphemy allegations since 1990. Over 60 people accused of blasphemy have been murdered before their respective trials were completed. Prominent figures such as ex-Governor of Punjab Salman Taseer, Minister for Minority Affairs Shahbaz Bhatti, and Rashid Rehman, a prominent human rights lawyer who opposed the blasphemy law, have all been assassinated.

A mere allegation of blasphemy is considered a license to kill; the alleged accused thus becomes a target and is forced to leave the country or go underground to flee the wrath of vigilante groups and individuals.

The lack of religious cohesion and a country divided on religious fault lines has resulted in the State endorsing intolerance and allowing abuse of law for the majority to suit their ulterior motives.

The Asian Human Rights Commission (AHRC) condemns the registration of the blasphemy case against Shaan Taseer under hate speech by the State of Pakistan. Clearly the State is acting under pressure of the Sunni Tehreek to persecute Mr. Taseer for expressing solidarity with minority communities and for opposing hate speech.

The State should establish its writ and protect its citizens against elements in society spreading hatred and threatening violence, rather than be complicit in regressive actions.

INDIA: Farmlands ‘developed’ a bit more into farmer graveyards in 2015 »