Home / News / Indonesia: The Government must seriously consider that the enactment of the RKUHP leaves serious problems

Indonesia: The Government must seriously consider that the enactment of the RKUHP leaves serious problems

Indonesia: The Government must seriously consider that the enactment of the RKUHP leaves serious problems

The Asian Human Rights Commission (AHRC), an international human rights organization based in Hong Kong, notes that the enactment of the Rancangan Kitab Undang-Undang Hukum Pidana (RKUHP) Draft Criminal Code leaves serious problems and it potentially becomes a threat to human rights and democracy. During the plenary meeting, on 6 December, 2022, the House of Representatives has enacted the Revised Criminal Code.

We regret that the enactment of the RKUHP seemed rushed and forced, so that the RKUHP, which is expected to be able to replace the old Criminal Code inherited by the Dutch, is feared to create new problems and will potentially threaten human rights and democracy. 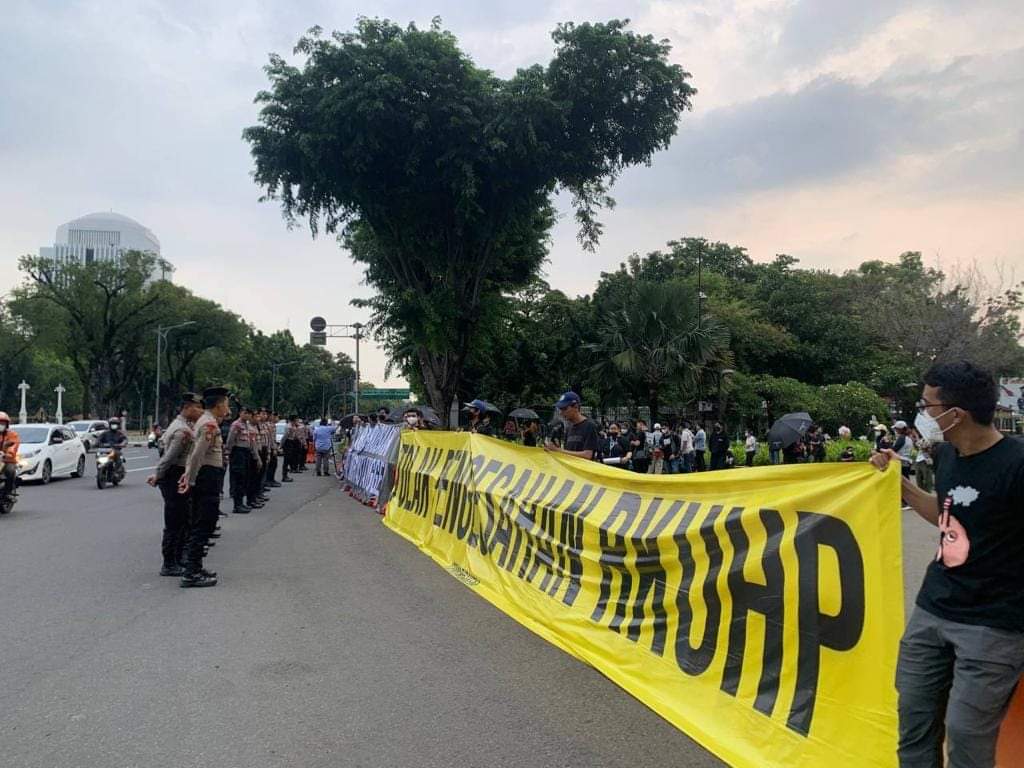 The AHRC agrees and wants to give stronger solidarity to the stance of the Indonesian civil society and national human rights organizations such as Press Legal Aid and Jakarta Legal Aid along with 18 other organizations who reject the enactment of the RKUHP. Therefore, the AHRC highlights the key points of the controversial Sections under the RKUHP as follows:

1. The Section related to the living law or the law that lives in the society. This rule takes away the sovereignty of the indigenous peoples, as the phrase “law that lives in the society” has the potential to lead to the misuse of the customary law for the benefit of certain parties. In addition, the existence of this Section in the RKUHP makes the implementation of the sacred customary law no longer within the authority of the indigenous peoples themselves but instead shifts to the State apparatus, which is the police, the prosecutors and the judges. This makes indigenous peoples lose their right to determine their own destiny. Apart from threatening indigenous peoples, this regulation also threatens women and other vulnerable groups. As is known, currently in Indonesia, there are still hundreds of discriminatory regional regulations against women and other vulnerable groups.

2. Sections related to the death penalty Many countries in the world have abolished the death penalty because it deprives human rights as a gift that cannot be reduced or revoked by anyone, even by the State. In addition, many cases have occurred in the context of capital punishment, namely errors in sentencing that were only discovered when the victim had been executed. The existence of Sections related to the death penalty in the RKUHP also received international scrutiny. In the Universal Periodic Review (UPR), there are at least 69 recommendations from 44 countries, both directly and indirectly against the Indonesian Government’s plan to ratify the RKUHP, one of which is the recommendation regarding a moratorium on or the abolition of the death penalty.

3. Additional penalties for prohibiting the spreading of or teachings of communism/Marxism-Leninism or other views that are contrary to the Pancasila (Five Principles Ideology) in public. This Section will become a rubber stamp Section and can revive the concept of subversive crime as took place in the New Order era under the Suharto regime.

5. Contempt of court. There is no clear explanation regarding the phrase “law enforcers” and therefore, this Section has the potential to criminalize advocates who oppose the authorities. As is well known, there have been many cases in court showing that the judge sided with the authorities. Apart from that, this Section also curbs press freedom because of the prohibition to directly publish trial proceedings.

8. The prohibition of demonstrations. This Section should contain a more stringent definition regarding “public interest” because this phrase has the potential to become a rubber stamp Section that can punish people who hold demonstrations to claim their rights. In addition, the phrase “notification” needs to be clarified and is not a permit, so that only notification is needed to the authorized apparatus and there should be no three-day limit as promised by the Government.

11. Alleviating criminal charges for corruptors in the last Draft of the RKUHP. Criminal charges against corruptors were too light and did not provide a deterrent effect to the corruptors, where corruption is a crime that has a broad impact on society.

12. National and multinational companies (corporates) as entities are difficult to be prosecuted under the RKUHP. The latest RKUHP Draft has added requirements for corporate responsibility. However, corporate responsibility is still borne by the management. There is no chance that the corporates will be responsible as an entity. Such regulations are actually prone to criminalizing corporate managers who do not have as much wealth compared to corporations, and therefore, managers can be subjected to or replaced with individual or management punishment. This regulation is also prone to weakening environmental protection, where the majority of actors are corporations.

Thus we submit this letter. Thank you for the attention.

« NEPAL: Ensure dignity, freedom, and justice for all

INDONESIA: Monitoring and Investigation of the Kanjuruhan Stadium Case »