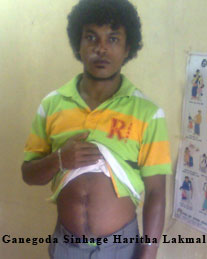 This is a photo of Mr Ganegoda Sinhage Haritha Lakmal (30) of No. 590/2A, Middle Gate Upper Road, Addunkelle Watte, Ahangama, who became an unfortunate victim of an assault by Sub Inspector (SI) Nelumdeniya and several other officers of the Ahangama Police Station, for no reason. The police officers identified themselves as “licensed thugs”. Due to an attack with the knee of the SI and kicks by other police officers he suffered serious injuries. Despite of his pleas the police refused to take him to hospital for many hours.

Eventually, when Lakmal was taken to the hospital, the doctor that examined him realised that he was suffering from serious injuries wanted to keep him in hospital for further treatment. However, he was taken back to the police station against the doctors instructions. Later when a family member arrived to see him at the station he was handed over to the family who rushed him to hospital where he underwent emergency surgery.

Later when Lakmal regained consciousness he learned that he had narrowly escaped death. Now, he is being harassed and pressurized to not pursue complaints against the police with the threat of assassination and fabrication of charges against him.

The photo shows the degeneration of police into sheer brutality — this particular case is just one more example of what has become the normal behavior of police throughout the country; the victim is one of the many thousands who receive similar treatment and is helpless to do anything about it. Complaint systems do not work and the law protects such brutality by ensuring impunity.

Why is there such absence of protection to the citizen and such license for police to act brutally without any legal consequences?

The reason is the Sri Lanka’s constitution.

It has given absolute immunity to the executive president. The president has taken all public institutions under his direct control. Internal disciplinary processes have been abandoned. No one bears responsibility to observe discipline of the police; the old system of command responsibility does not operate. Everyone can behave as they wish.

When checks and balances are removed from institutions, officers can act like animals or worse and the citizens they are supposed to protect are at their mercy.

The constitution talks of citizens rights only in name. THERE IS NO REAL PROTECTION.

It is shame to have such a constitution. The citizens must demonstrate with more intelligence on matters of the constitution, if they want protection. Until such collective intelligence is shown by the citizens, they will have to suffer such treatment from police who now publically identify themselves as LICENCED THUGS

See the details of the story at (Link) SRI LANKA: A man was illegally arrested, detained, tortured and refused medical treatment by the Ahangama Police

« WORLD: Cambodia — Abysmal lawlessness and the powerlessness of the citizens