Home / News / PAKISTAN: Over 100 workers at ship-breaking yard incinerated without a trace

PAKISTAN: Over 100 workers at ship-breaking yard incinerated without a trace 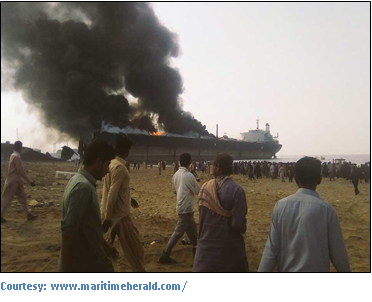 In one of the worst incidents that has occurred at plot number 54 Gadani ship-breaking yard, in Balochistan, 26 people have lost their lives and more than 100 are reported to missing and feared dead. It is likely those missing had their bodies burned to ashes and washed away by the water used to douse the fire that has been raging for three days.

Nearly 250 workers were onboard a decommissioned Japanese oil tanker, MT Aces, when a blast sparked off a large glow and an array of explosions on the 24,000-ton vessel docked at the Gadani ship-breaking yard on 1 November 2016. The explosion was so intense that it sent pieces of metal flying up to 2 km away. It took the fire fighters, civil and military, three days to completely put out the flames.

The contractor, Messrs Ghafoor and Company, failed to obtain clearance from the Customs, while the dismantling was initiated without first obtaining the No Objection Certificate (NOC) from The Department of Environment and the Balochistan Development Authority (BDA). Though an FIR has been lodged against the firm owner, he is said to be at large.

A fact-finding committee commissioned by Human Rights Commission of Pakistan (HRCP) has found many discrepancies in the number of workers that were working on the ship at the time of the incident. The committee found that the workers were not provided with any safety gear and not even provided with food, water, or shelter during the tenure of work. The committee also found that the contractor Ghafoor and Company, in order to expedite the ship breaking, didn’t follow the safety procedure of emptying the fuel tank. When the committee tried to locate the register of attendance of workers on the fateful ship, authorities informed them that the police have sealed the office of Ghafoor and Company.

According to Ms. Farhat Parveen, from the commitment of National Organization for Working Communities (NOWCommunities), the death toll is feared to rise as many of those injured have sustained more than 50% burns. Several workers were trapped inside the burning vessel for hours before being rescued, as the only fire engine available at the port was nonfunctional. Eyewitnesses recount hearing several explosions after the first deadly blast. Against the dictates of the Standard Operating Procedures (SOP) of first emptying the fuel tank before the ship could be dismantled, the contractor initiated the work, and the resultant explosion took place while the workers were working near the fuel tank of the ship.

The industry that is notorious for being more dangerous than mining, employs a workforce of 6,000 direct workers and pays them a measly daily wage of around Pak Rupee 500 to 800 (US $7 to $11). Due to lack of safe working conditions, the workers are forced to work in precarious conditions in complete disregard to personal safety. The workers are exposed to many carcinogens, toxins, and other hazardous materials that can potentially maim them for life. Due to lack of legislation on import of hazardous waste in the country the workers are exposed to hazardous waste material that the industrialized nations seek to dump.

The introduction of stricter laws and regulations to protect workers and the environment prompted the shift of ship-breaking activities to South Asia, which many environmental expert term as the “toxic colonization” of poor nations.

As per the United Nations Conference on Trade and Development (UNCTAD), in its annual report ‘Review of Maritime Transport 2016, Pakistan is the world’s leading ship breaker. Pakistan’s ship breaking industry demolished almost half of the global scrapped oil vessels in the last year.

According to Chairman of the Pakistan Ship Breaking Association (PSBA), metal gathered from the Gadani ship-breaking yards meets 80% of steel demand by local rerolling and melting mills and generates 10 billion rupees ($98 million) in revenue for the government annually. Yet, the workers of this potentially lucrative industry have no access to basic safety equipment, including the most critical ones, such as hard helmets. If they are injured, workers have no local hospital to go to and have to be driven to Karachi for treatment, i.e. around 60 km away.

The extremely hazardous working conditions go unchecked and unreported as the Balochistan provincial government has failed to enforce the provisions of the Dock Laborers Act, 1934; no inspection of the working conditions has ever taken place. The Directorate of Dock Workers Safety (DDWS) is also an ineffective body that has so far done nothing to create awareness about the health and safety amongst the dockworkers.

A report titled “Pakistan Ship Breaking Outlook: The Way Forward for a Green Ship-recycling Industry” details how Pakistan still does not have any defined Standard Operating Procedures (SOPs) to deal with hazardous wastes and other materials retrieved from ships. To make matters worse, hazardous waste from ship-breaking activity has been accumulating over the years in Gadani.

Being a signatory to UN Basel Convention on the Transboundary Movement of Hazardous Waste, which it ratified on 24 August 1994, the government of Pakistan is required to take coherent steps to ensure the environmentally sound management of hazardous wastes if it allows for the import of end-of-life vessels.

As a state party to the Convention, Pakistan has to ensure that its ship-breaking yards practice the Environmentally Sound Management (ESM) of hazardous wastes as laid down in the Basel Convention and the Technical Guidelines.

The Gadani beaching area has more than 100 ship-breaking plots, mostly owned by local leaders, with just around 30 owned by the Balochistan Development Authority. After the devolution of power through the 18th Amendment, the Balochistan government is responsible for overlooking the safe disposal of hazardous material as well as ensuring safety of the workers employed.

Even though Gadani earns huge revenue for the Balochistan government, in addition to catering to the need of iron and steel of the whole industry for last half century, it is kept improvised in terms of basic infrastructure and is thus extremely susceptible to accidents as no attention is paid by the provincial government to equip even the fire stations. On 22nd May 2015, 35 people lost their lives when a passenger bus caught fire after it collided with an oil tanker in Gadani. Due to the absence of a fire engine, 35 people lost their lives; the fire was extinguished several hours later, after a fire engine was called from Karachi, by which time the bodies of all 34 victims were charred beyond recognition.

Corruption, mismanagement, and lack of safety measure have marred the once booming industry of ship breaking in Pakistan. Many contractors are obtaining the contract illegally and without following the procedure as laid out in the laws. These contractors hire workers paying them wages that are below the minimum daily wages set out by the government; the contractors do not even provide safety gears to the workers they hire.

As per Mr. Ashraf Khan of Agence France Presse (AFP), many contractors in connivance with the police and the local administration forcefully refrain or completely forbid the workers from forming a union. That is why the laborers are left without a voice and can’t protest against the hazardous working conditions.

The Gadani ship breaking incident should act a reminder to the federal and provincial government to develop a coherent environment-friendly ship-recycling strategy and to raise the safety standards in line with the provisions of international conventions and local laws.

There is an urgent need to recognize ship-breaking as an industry and develop the Gadani port as a modern ship breaking facility with proper facilities such as basic heath units, fully equipped fire stations, and health and safety training centers.

The State must ensure that the contractor complies with the provisions of Standard Operating Procedures of providing clean and safe recycling of ships and that Occupational Health and Safety (OHS) rules are strictly followed.

Pakistan should ratify the Hong Kong convention for safe and sound recycling of ships that is not damaging to the environment or human health. Stringent and coherent policies should be enacted and implemented to make the working environment safer for the laborers while ensuring that the requirements of labor rights, as per the International Labor Organization, are met.

About the Author: Javeria Younes is an advocate and legal researcher. Her research work titled “Custodial Torture its ramification and failure of institutions” has been published under the auspice of AHRC. She has also written a handbook on torture for the victims of torture to help them seek medical, psychiatric, and legal aid. She can be reached at javeria.younes@live.com