Home / News / INDIA: Arbitrary detention of Mr. Chandrashekhar Ravan makes a mockery of the rule of law by the UP state government

INDIA: Arbitrary detention of Mr. Chandrashekhar Ravan makes a mockery of the rule of law by the UP state government 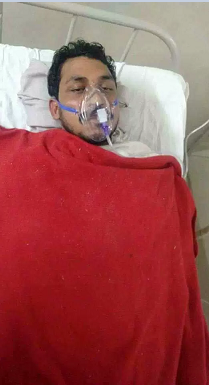 Mr. Chandrashekhar Ravan, the founder of the Bhim Army remains in custody despite the Allahabad High Court granting him bail in all the cases registered against him. Ravan is in custody because of the Government of Uttar Pradesh has registered a case against him under the provisions of the draconian, National Security Act, 1980. The NSA provides for ‘preventive detention’, an act that defies the basic tenets of the rule of law and fair trial. This law allows the arbitrary and abusive use of the power to detain to the police (and state) thereby denying a person all freedoms.

The NSA provides for the detention of those arrested for an initial period up to three months, without trial, which upon the opinion of an Advisory Board constituted by the government under the NSA could be extended for 12 months. The NSA therefore defeats the basic principles of fair trial, and in effect revokes the jurisdiction of judicial magistrates to intervene when the state choses to detain the citizens unlawfully. Under the NSA, bail is no more a right.

The NSA also prevents that an order of detention made by the government cannot be challenged because one or some of the grounds for detention is vague, non-existent, not relevant, not connected with the person detained or invalid for any other reason whatsoever. This means the government could detain a person on mere allegations, unsubstantiated in substance or facts. It also means that a person could be detained under the NSA, and that the detention is approved without a right to appeal, by a non-judicial body like the Advisory Board constituted under the NSA and that such a detention could last for a period of 12 months. This is what that makes the NSA one of the most draconian legislations in India. It is no surprise that both the Union as well as the state governments in India resorts to wanton misuse of this legislation.

Evidently, Ravan’s continued incarceration even after being granted bail by the Allahabad High Court makes not only a mockery of the rule of law but also of India’s judiciary. The fact that Ravan is detained despite “the lawful judgment of his equals or by the law of the land” allowing him his freedom, makes the decision of registering a case against Ravan under the NSA a travesty of justice.

The continuing detention of Ravan, in fact, is an open and willful defiance of the judiciary and, along with it, the separation of powers as envisaged in the Constitution of India. As different governments have repeatedly indulged in such travesties, perhaps it is high time for the judiciary to look into the constitutionality of this draconian law, and devise a way to stop the abuse of power by the state through the use of this law, or to declare the law as unconstitutional.

It is a worrying issue in India, that the civil society in the country is silent against this misuse of this law by the government. They have remained largely silent regarding Ravan’s case as well despite medical reports suggesting that Ravan’s health in detention has deteriorated since his arrest in June 2017.

A few human rights organisations have demanded the revocation of charges under the NSA against Ravan, and his immediate release. The Committee for the Defense of Bhim Army (CDBA) has been relentlessly working for his release. Yet, the fact remains that the interventions have been few and far between. Any observer will notice, little worryingly perhaps, that compared to the robust resistance against earlier persecutions of the civil rights activists in the country, the Indian civil society has been slow in its reaction against the incarceration of Ravan, by comparison to the civil society response during the detention Dr. Binayak Sen, or that of the student leader and former Jawaharlal Nehru University Students Union President, Mr. Kanhaiya Kumar or that of Ms. Medha Patkar.

One can only hope that the silences are not reflective of the viciousness of the current regime succeeding in instilling an insidious fear among even the civil rights activists. That being the case would not augur well for the future of the country. That will, in effect, help the incumbent national government turning India into a police state. The horrendous experiences of Indians where yet another draconian legislation, the Armed Forces (Special Powers) Act, 1958, is in force must be a living reminder that should urge every Indian to stand up against the use of legislations like the NSA against civil society leaders.

Mr. Tom Bingham, in his classic The Rule of Law has elaborated this aptly: “The hallmarks of a regime which flouts the rule of law are, alas, all too familiar: the midnight knock on the door, the sudden disappearance, the show trial, the subjection of prisoners to genetic experiment, the confession extracted by torture, the gulag and the concentration camp, the gas chamber, the practice of genocide or ethnic cleansing, the waging of aggressive war.”

In India, the midnight knocks have begun. So have the show trials. Need one wait for the rest? It is high time for the Indian civil society to gather itself and fight against repressive legislations for which Ravan’s case is an apt and living example.