The following article was published as the editorial of the latest issue of Torture: Asian and Global Perspectives 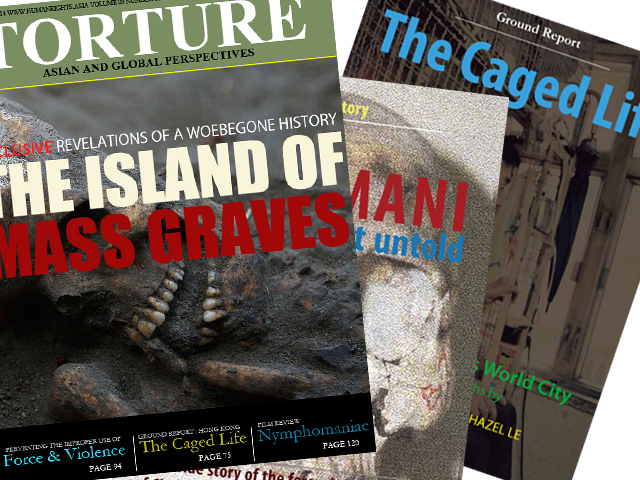 Sri Lanka is once again on the edge of a political crucible in terms of its international relations as well as in its domestic politics. The country is ignoring calls for an independent and credible investigation into alleged wartime atrocities while at the same time carrying out atrocities against its own people.

None of the elected or appointed officials have been able to fulfil even the basic requirements of their offices, but instead put all their efforts into finding loopholes to escape the situation and to justify what they have done.

Mass Graves are not a new phenomenon in Sri Lanka as over 30 – 40 mass graves, including potential sites, were found in Sri Lanka in last two decades. In addition to the mass graves of atrocities by the state there are also many mass graves in Sri Lanka for the victims of the Asian Tsunami which happened in December 2004, and claimed over 38,000 lives in the island nation. However, the ruling alliance engages in an ad hoc based solution to avoid justice, ignoring the concerns that mass graves give rise to. Consequently, some of relatives of the victims’ family were intimidated by the government security forces when they approached the court accepting inquiries into the mass graves.

Since the early 1970s, hundreds of thousands of people have been killed by the government and by the non-state actors who led insurrections against the neo-feudal governmental apparatus in an attempt to reform society. However, the government was able to crackdown on the challenges to their rule while picking up those who were engaged the cause and, sadly, some of those who had nothing to do with the insurrections. To eliminate the insurrections the government ordered mass killings of those who were picked up by the military forces and its paramilitary allies, and later dumped some of their bodies round the country while others were burnt to death on the country streets. This horrible truth has come to light with the discovery of the mass graves of the victims of extrajudicial killings. During the last two years the country has learned of two newly discovered mass graves.

One is in Matale, in the Central province; and the second is in Mannar in North province of the country. In the latter case, where well over a hundred human skeletons were discovered, the government may have influenced the excavation and investigations by impeding the work of the professional forensic investigators. It is widely believed that the military commander of a certain regiment is responsible for this crime against humanity.

The latest result of the government’s denial of the right to life was the third resolution on Sri Lanka adopted at the United Nations Human Rights Commission in March 2014, in which the government was urged to accept international assistance to conduct an independent investigation on the crimes reported during the last phase of the battle between the security forces and the Liberation Tigers of Tamil Eelam (LTTE). The LTTE, which was fighting for a separate state within the island, was classified as a terrorist origination by many countries, including neighbouring India. Their struggle ended in May 2009 when its leaders were killed by government security forces.

Despite all the other crimes that were reported in the country’s recent history, the third resolution adopted by the UN human rights council drew its serious concern about the crimes reported during the last phase of the war, which is indeed a necessary development. Most of the well-balanced critiques on the resolution come across as the end of sleep walking on the part of the international community regarding the grave destruction in Sri Lanka. In other words, this is an attempt to counter the well established policy known as trying to catch a fly in a dark room.

However, challenges remain in the domestic political arena, especially regarding the arbitrariness of government policy which tends to avoid fulfilling the basic requirements for justice. Instead of totally destroying the system of the institutions of justice, they simply distorted them and appointed close allies to manipulate the process. This makes for a greater confusion among the people as well as the international community. Through all this the people still believe that they have the ability to achieve democratic rule, justice, and freedom, which they believe will be able to protect their basic rights. But in reality this is an illusion. Perhaps this deliberate paralyzing of the country’s criminal justice system and other state institutions was a well-designed plan by the, to keep their power and prevent the people from obtaining justice by undermining the basic rights of the people.

“Mass grave excavations have also the potential to fulfil important humanitarian goals that go well beyond prosecutorial needs. In the aftermath of gross human rights violations, evidence from the field suggests that information as to what happened and how is happened, fulfils a very important need of families and survivors. In fact, this need to know the truth is vital and may have primacy over wanting justice; the desire for justice may follow on from knowing the truth. Though it should also be noted, that learning and knowing the truth can have complex and unpredictable effects on the individual and may exacerbate strains between the individual, the past and society. In any event, mass grave investigation need to be mindful of the psycho-social ramification they have on the survivor population and on relatives of the missing. Investigations of mass graves for criminal purposes need to ensure that they form the first step in a continued effort to provide families with information, identification and return the human remains,” Klinkner pointed out in an article written for our magazine.

It is time for the Government of Sri Lanka to take up this issue as one of their priorities to help the relatives of the victims find justice. We appreciate the government’s recent announcement addressing the conduct of the investigation, but it should not be a part of the same hide and seek game which the government has engaged in during last few decades to cover-up their crimes against humanity. There are local forensic officials who are able conduct independent investigations if the government or the international community is willing to arrange the required facilities.

Sri Lanka is indeed an Island of mass graves. And today, Sri Lanka is undergoing tremendous upheaval and chaotic social disorder, where the basic requirements of justice have been denied and replaced with political vulgarism and religious intolerance with the help of the ruling party and military. This continues to be a major challenge to overcome in conducting an authentic investigation procedure on not only the mass graves, but the crimes reported in the country’s recent past as well. The very reason the government wishes to avoid the investigation is because those who committed the crimes are now key members of the government. In this dire situation, the people in general, as well as the international community, have a role to play and a responsibility to find justice for those who were buried en masse throughout the history of the island nation. 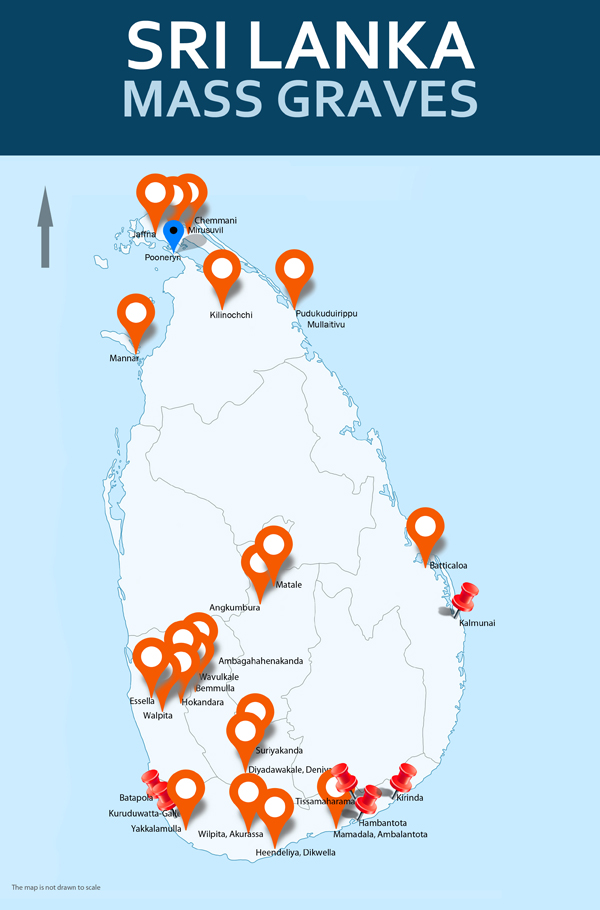 Graphic: Mass graves in post-independence Sri Lanka were first reported following the 1971 youth uprising led by the Peoples Liberation Front (known locally as JVP) which was brutally terminated by the then government. However the locations of these post 1971 mass graves are hidden from the public knowledge and hence they are not represented in the above map. Numerous mass graves have been clandestinely created by the Sri Lankan government during the second youth uprising led by the same political party in the 1987-1990 period and locations of these gravesites are illustrated in the map. Virtually all mass graves reported in the northern and eastern provinces of the country were resulted from the thirty year long civil war between the LTTE and the ruling governments which ended in 2009 and said to have contained the remains of minority Tamil speaking people died during the war.

Click here to read the online version of the issue.