At the crossing of the multiple divisions and fractures which fragment the Pakistani society, Christian, Hindhu and Sikhs, women suffer one of the heaviest burdens of all the marginalized groups in Pakistan and are the unfortunate victims of both a male dominated society and a Muslim dominated country. 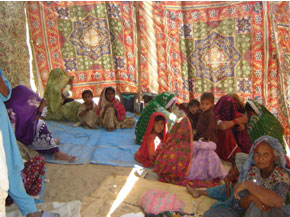 Stories of the violation of their fundamental rights are numerous and most of them do not attract much attention, but those which are reported draw a clear pattern of the discrimination and violence they have to face, often powerless and with no resources.

The case of the 71 Dalit Meghwar families who chose to leave their houses and their ancestral village to protest against the abduction of a 15-year old girl, Daya, which was forcibly married to an influential Muslim man and converted to Islam is an emblematic case. According to the community, the abductors have threatened them not to alert the authorities nor seek any remedy to the situation to avoid seeing more girls being abducted. Fearing for the safety of the other girls of the community, the Meghwar families have chosen to migrate and to ask protection for their girls. They have settled down in the plains near Mithi Town and are now deprived of their source of income, food and access to drinkable water, and remain in complete governmental indifference. (see pictures)

Most vulnerable among the most vulnerable, women have always been a target of choice for dominating majorities to weaken undesirable minorities. Attacks against women from religious minorities should therefore not be considered as punctual, isolated and unrevealing cases. 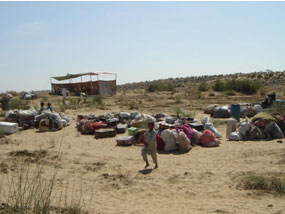 It is estimated that 20 to 25 Hindu girls are abducted each month and forcibly converted to Islam in Pakistan. The head of the Madressa, (Muslim Seminary) in Samaro, in which Daya was converted, has declared that 40,000 non Muslims had been converted to Islam so far in the Madressa. Through forced marriages and conversions, it is the whole structure of religious minority communities which is being targeted.

In front of all those hardships, religious minority women are particularly helpless and no mechanisms are designed to protect them. Cases of sexual abuses or of abductions of women from religious minorities, when they go reported, if they do, are only rarely addressed by the law enforcement authorities.

In a case documented by the Asian Human Rights Commission in March 2010, the family of a 17-year-old Hindu girl, Kastoori, who was kidnapped by three influential Muslim brothers and raped by one of them, was pressured into accepting her wedding to her rapist and her conversion to Islam by a jirga court (illegal tribal court). Court and police inaction went as far as arresting the victims father under a fake case and intense pressures from ruling party members and local landlords prevent the family from seeking further assistance. 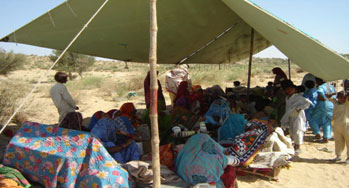 In another case, Miss Gomti, a 15 year old Hindu girl was abducted by the landlord her parents work for and got married to one of his peasants after being converted to Islam. When, after 6 weeks, her parents eventually managed to find out what had happened to her, they were only able to see her in presence of their landlord’s employees, in the presence of which the young girl pressed her parents to convert to Islam. When presented with the wedding certificate of the young girl, her parents realised that her age has been falsified and registered as ’19’ to have the ceremony in conformity with the law which fixes the minimum age for marriage to 16 years of age.

In most of those cases, once the girls have been abducted, forcibly converted and married, the parents are not allowed to meet with their daughters and unable to learn about their whereabouts. After the marriage, the husband comes back to his normal life, comes back to his village, but what happens to the bride remains a mystery. Strong suspicions have arisen that after being converted, those girls may be trafficked and sold. Indeed, once the girl has been converted, married and theoretically integrated into the Muslim society, why would the husband be unable to give details about his brides whereabouts and why would the bride seem to be unable to appear in public? Investigation into what has happened to those young girls is urgently required, but this would require a strong involvement of the state authorities which is yet to be seen.

At the highest level, the government response has been mostly marginal and reactive with no broad measures being designed to ensure the protection of religious minorities in general and of women in particular. It is true that measures have been taken by the State to ameliorate the plot of women in the country: the amendment of the Penal Code in November 2009 which penalises the harassment of women at any public or private workplace or the drafting of a bill criminalising domestic violence are two welcome steps for instance. Nevertheless those few positive achievements are highly unlikely to impact on the lives of the women of the religious minorities.

Indeed, extremely difficult access to the mechanisms put in place by the law prevents them from adequately providing the religious minority’ women with protection. Some international human rights organizations, such as Human Rights Watch while welcoming the penalisation of sexual harassment noticed that the law did not provide the women with mechanisms to access the legal protection it made provision for. In a country in which flaws and corruption of the legal and penal system hampers its proper functioning, average citizens face difficulties to access legal remedies. Obviously being a women and belonging to a religious minorities further add difficulties to this obstacles course and leave the women without any remedy to protect themselves from daily abuses.

In the cases mentioned above, the local police have clearly shown their reluctance to investigate cases involving Maderssa (Muslim seminaries) and Muslim cleric and refused to provide the victims’ family with assistance and protection. One case is particularly emblematic of the lack of cooperation of the state authorities in cases of abduction and forced conversions of young girls. In December 2009, Gajri, a 15-year-old Hindu girl was forcibly taken away from her house and converted to Islam. When her parents tried to file a First Information Report at the police station, the staff discouraged them from doing so. Later, a Madarssa informed the police station that the girl had embraced Islam and had married her neighbour. Nevertheless, the police failed to avert the family of this new piece of information and the parents only came to know this fact a few days later when they tried once again to file an FIR, which was again refused by the police staff. When the parents tried to file a case of abduction against their neighbour and the Madarssa, the district police officer refused to do so and made himself the advocate of the perpetrators by explaining that he had no power in matter of conversion, that the 15 year old girl was the property of the Madrassa and is reported to have said that Islam is a religion that could be entered and not exited.

Through this denial of justice, the state fails to fulfil its duty of protection of the safety of all citizens in cases which clearly constitutes violations of children’s rights and freedom of religion as entrenched in international conventions such as the article 18 of the International Covenant on Civil and Political Rights and the article 30 of the Convention on the Rights to Child, both of which Pakistan is a party.

Lack of social and economic empowerment further deprives those women of protection. Recent surveys have revealed for instance that 87 per cent of scheduled caste Hindu women were illiterate compared to 63.5 per cent of males of their community, given that the national illiteracy rate among Pakistani women reaches 58%. The gap between the primary school enrolment rate of the scheduled castes women (10.2%) and the average rate (48% of Pakistani females) also tells much about the huge discrepancy existing between the opportunities offered to women from minority communities and Muslim women. There is no need to remind anyone here that a lot of Muslim women, as such, already face extremely high difficulties in accessing education and in obtaining equal socio-economic opportunities as men.

In urban areas, women from religious minorities are most often employed as manual scavengers or sanitary workers for insignificant wages. In rural areas, they sometimes handle small agricultural tasks such as picking of cotton and chillies for marginal wages, when their families are not trapped into the system of bonded labour. Moreover, when women manage to generate resources through those activities, their incomes are managed by the family head. Such practice further marginalizes women from economic empowerment and leads to a somehow paradoxical situation in which those handling the double-work load of low-paid manual labour in agriculture, domestic services or as manual scavenger and of unpaid domestic labour at home are those who benefit the least from the income they generate through it.

It has become a trite remark to assert that laws and regulations alone will not prevent violence against religious minority women in Pakistan but that a much deeper and stronger move is needed to transform the whole mindset of the society both toward the inadmissibility of violence against women and toward the respect of different creeds and beliefs.

Nevertheless there is a wide range of proactive measures which can and should be taken to encourage this transformation such as programmes promoting the education of religious minority girls, the restoration of health facilities in the religious minorities area and the provision of micro-credit loans to women entrepreneurs to encourage their empowerment. A strong and deep move toward the eradication of bonded labour under which women are vulnerable to sexual exploitation from the landowner is also indispensible. The government of Pakistan, whose response has been limited and mostly retrospective, should fully tackle this issue and show strong commitment to the protection of women from religious minorities. The state should make sure that women vulnerable to abduction will not remain without protection and police officers who refuse to file a FIR in cases of rape and abduction involving religious minorities shall face sanctions.

Obviously, the government of Pakistan, the civil society and the international community all have a role to play in favour of the protection and the empowerment of religious minority women in Pakistan.

« PHILIPPINES: Five months on, no charges filed against soldiers who tortured indigenous villagers

SRI LANKA: Samples of brutality that happened in the late eighties  »