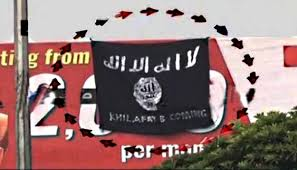 In the face of the world pointing accusatory fingers at the State for harbouring terrorists and militants, plus US President Trump’s threat of sanctions against Pakistan, State Officials are denying the existence of militancy in the country. The timing of the world’s most dangerous militant organization ISIS to announce its presence in the capital city could not have been worse. After the fall of the Islamic State, well known as ISIS, in Syria and Iraq, it appears that the group is all set to make Pakistan its base.

The Pakistani Government and Security Agencies have been denying the existence of ISIS, Da’ish (Arabic acronym for Islamic State group), in the country, despite the presence of rampant wall-chalking welcoming ISIS and pledging allegiance to the terrorist and internationally proscribed organization. Since 2014 there have been reported cases of pamphlets being distributed containing jihadist literature and proclaiming non-Muslims as infidels and preaching to Muslims to cleanse the infidels from their midst.

The Ostrich Syndrome, that the Government and Establishment of Pakistan is suffering from, has done little to stop the organization from gaining roots. On 24 September 2017, a banner was placed on an overhead bridge located on the Islamabad Expressway- a main artery of the city. The banner had an ISIS flag along with the slogan “Khilafat is coming” inscribed on it. The banner was visible from afar. It remained there for a couple of hours before being taken down by the Authorities after a person complained to the Authorities.

Ironically, the complainant was taken in by the Police for interrogation and asked how did he know it was the flag of ISIS? One is flabbergasted by the naivety of the local Police despite the threat of the militancy so rampant on the country and pro-IS slogans appearing on walls in several cities across the country.
The Failure of the State Machinery in curtailing the allegiance to the militant organization is beyond comprehension. Despite a major chunk of the national Gross Domestic Product (GDP), going to fight militancy and internal threats to the country, one hardly finds any decisive action being taken against the extremist element to exterminate the root cause of militancy once and for all.

However, given the Institutionalized Discrimination against minorities and marginalized groups in the Constitution itself, curbing militancy and extremism is akin to wishful thinking.

In fact, IS fighters are rather seen as savior- knights in shining armor- by Muslim clergy. In 2015, female students of Jamia Hafa- a religious school associated with radical Lal masjid (Red mosque) was situated in Islamabad. The female students in a video statement called upon ISIS fighters to help their Muslim sisters and seek revenge for the martyred students killed in military operations that killed hundreds of students.
Moreover in mid-2014, pro-ISIS graffiti and propaganda – namely a booklet called “Fateh” –appeared on the streets of Peshawar, Karachi, and the Federally Administrative Tribal Areas (FATA).

Lack of coherent policies and implementation of a national action plan coupled with a policy of denial has caused the problem to increase in complexity and gain ground, with other terrorist outfits creating their own franchise of ISIS. Chaudhry Nisar Ali Khan, Pakistan’s former Interior Minister, reportedly stated that “the militant Islamic State group which is a Middle Eastern organization has no presence in Pakistan.” He further said, “Daesh [Arabic acronym of ISIS] does not exist in Pakistan

Even the most talked about National Action Plan (NAP) which is in its third year of promulgation, was termed as ambiguous and ineffective by the Quetta Hospital Carnage Inquiry Commission and released by the Supreme Court. As per the report, the extremist organizations are operating quite freely, nepotism in appointments is pervasive, ministries are generally irresponsive and authorities inaccessible to the public. The commission also found that the National Action Plan was not a plan structured or meaningful, nor has its goals been accordingly monitored or implemented. It should be made into a proper plan, with clear goals, a comprehensive monitoring mechanism, and periodic review. It should also be translated into Urdu for wider dissemination and understanding as recommended by the Commission.

Over a period of years, Pakistan has become a Security State where laws curtailing peoples’ rights were surreptitiously passed, without taking the public into their confidence. Thus, persons may find themselves entrapped in the web of legislation, if God forbid, they are accused of harboring anti-State ideology. For instance, in 2013 the Fair Trial Act was passed by Parliament. The Law allowed Law Enforcement and Intelligence Agencies to seek surveillance warrants against individuals whom they consider are likely to be involved in anti-State terrorist activities.

As per the legal experts under the Act, a person can be potentially condemned and not heard since a surveillance warrant, under this Act, can be issued against him/her without even hearing his/her point of view. The Law was passed without due discussion and debate in Parliament. Ironically, the Law did exactly the opposite of what it was supposed to entail i.e. fair trial.

The State has adopted a policy whereby laws against natural justice are passed arbitrarily and surreptitiously. This makes it difficult for people to be aware of the existence of such laws and the subsequent curtailment of their fundamental rights, whereas the militants are afforded ample space to go scot free.

Terrorism has its roots in the orthodox interpretation of religion whereby it is used as a tool of oppression rather than enlightenment and moderation. Paying lip service to militancy, while treating them as proxies’ against other countries, has become the State’s policy.

No wonder the Law Enforcement Agencies come down harder and with lightning speed against any liberal dissenter while the same Government drags it feet when dealing with militants and militancy.

Is it a mere coincidence that oppressive laws such as PECA took less than a year to be promulgated and implemented while laws which curtail impunity of Law Enforcement Agencies, such as the Torture Act, are not even considered worthy of consideration? Pakistan is a signatory to UNCAT and under the obligation of the International Covenant to promulgate the Law.

The State Apparatus must quash the militants and militancy tendencies by promoting an egalitarian, equitable and pluralistic society where each citizen has a right to be treated equitable and justly. Where the vulnerable do not feel threatened and are not ostracized for being different in terms of their religion, caste, ethnicity or socio-economic background. The country’s future lies in its people. And unless the State invests in the development of its population, the country cannot expect to prosper and rise in the Commune of Nations as a viable and sustainable nation.

Advocate JaveriaYounes is a social activist and legal researcher striving for an egalitarian society free from torture. She has also written a handbook on torture that helps a victim in seeking medical, legal, and psychological aid. She can be reached at javeria.younes@live.com

NEPAL: Women’s rights activist accused of being a ‘witch’ and beaten »