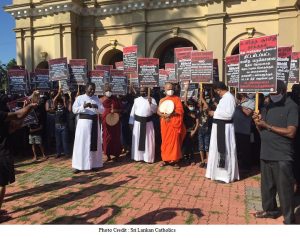 In answering the call of the Catholic Bishops Conference of Sri Lanka, the faithful living in various parts of the country wore black and attended the churches as a protest against the failure to provide justice for all those who were killed in the Easter Sunday bombings in 2019. They also participated in silent protests. This Black Sunday is a good occasion to reflect back not only on the lives that were lost on that blackened Easter Sunday, but also the general nature of the threats posed to human life in Sri Lanka where protection
has become an extremely difficult problem.

All this time, the two governments, the one that was in power and what is in power now have concentrated more on creating a political discourse around the Easter Sunday massacre. However, what they have completely failed to focus on is the investigation that was required for a grave crime. No amount of presidential commissions can replace the most primary requirement in dealing with crimes that is the need for criminal investigations. Presidential commissions are not and cannot be the means of inquiring into a crime in terms of the criminal law. That is the task of criminal investigators.

In a modern society, the prevention of crime and also punishment for crimes that has already been taken place can happen only when there is a dedicated, competent and efficient criminal justice system. It is the investigators who could find the details of the actual criminals who carried out these bomb attacks and the conspirators who were criminally involved in the crime.

Criminal investigations are a function of the policing department. It is perhaps the most important function of a police department to have the kind of investigators that would find all the evidence that is required which reveals the crime and those who are involved in the crime. Gathering of evidence from the point of view of the criminal law and the evidence law of a country is the only way by which the criminals can be found and also they could be successfully prosecuted.

The people who sit as presidential commissioners are not part of the police investigating division, nor do they have the necessary means and competence to be investigators.

Proverbially the task of a criminal investigator is illustrated by a character like Sherlock Holmes created by Sir Arthur Ignatius Conan Doyle in his stories. The criminal investigator uses the methods which have been developed over centuries in order to gather facts relating to a crime and thereafter to analyze these facts to arrive at conclusions about the individuals who were involved in carrying out the crime from many points of view.

If the Catholic Bishops Conference of Sri Lanka and all others who are concerned with bringing the perpetrators of the bomb blast which killed large number of persons are to make an intelligent contribution to resolving of this neglected problem, their concentration should be to scrutinize the manner in which the criminal investigations into these bomb blasts have been carried out.

If such a scrutiny is carried out, one glaring fact will come to the attention of anyone concerned, that is that something has gone radically wrong in the criminal investigation capacity of the Sri Lankan police. Whatever may be the cause of this loss of capacity for thorough and comprehensive criminal investigations leading to tangible results, the important matter now is to address the loss of this all-important capacity in order to ensure the security of people. When the police function of criminal investigations is lost, everything is lost from the point of view of the capacity to investigate and prosecute criminals. That situation exists overwhelmingly in Sri Lanka for the past few decades.

When the President Gotabaya speaks of security, he always refers to security at the time of civilian conflict like that of the LTTE where the idea is very different to the security that should prevail within a society in normal times. The primary agencies in the times of conflict in maintaining national security is the military. However, the primary agency that is in charge of dealing with crimes including criminal investigations is the National Police Service. In the utterances made by President Gotabaya or any other leading figure in the government, there is hardly any mention of the resuscitating of the criminal investigating capacity of the Sri Lankan police.

The same could be said of the previous government also. They too completely neglected the development of an independent criminal investigation branch which is not dependent on the manipulations of politicians but carry out their functions only within the professional limits that are part of the philosophies and the practices relating to criminal prosecutions. In fact, in recent times, all the governments have conspired and acted continuously to undermine the criminal investigating capacity of the Sri Lankan police.

By the end of the colonial period, and in the early years after the independence, there were very important developments where much resources were allocated in order to develop a kind of professional criminal investigating department which could stand in par with other similar institutions in other parts of the world. In fact the achievements of the criminal investigators of the time was remarkable.

However that is not the situation today. Among many causes that has caused the deterioration is the fact of trying to manipulate the criminal investigation department for various political uses. On the one hand, use this department in order to target political opponents and on the other, undo and erase evidence against those whom for political reasons, the government wants to exonerate. Both ways have affected the system badly.

That damaged criminal investigation department is the source from which the Sri Lanka’s ability to deal with serious criminal investigations rose. That is the root that needs to be addressed if those who are demanding accountability for the crimes committed on the Easter Sunday should concentrate their effort on.

If that does not happen, all that will happen is a merely repetition of what has happened already during the last two years and that is to keep a farcical situation about ensuring justice for the victims and survivors of this massacre. It is not only about this massacre but also about almost all serious crimes.

Thus, those who lost their lives in the Easter Sunday massacre has a message for all the people living in Sri Lanka now; that message is “if the security of life is to be guaranteed then first of all ensure that the crimes committed against us be criminally investigated and by doing that, make our loss of our life meaningful for the rest of the country so that similar occurrences would be prevented by the very knowledge that the country is capable of getting at any criminal of whatever orientation or inclination at the shortest possible time.

If there was a well functioning criminal investigation unit, it would have received information about the crime even long before it would have happened. For people to trust the police, it is essential that they have a conviction that whether information that is given to the police will lead to inquiries and that the capacity of the investigators are such and they are capable of finding the truth.

It was a paralyzed and dysfunctional criminal investigation capacity on the Sri Lankan police that is the root cause of the possibility of doing such drastic criminal act.

Life of everybody in Sri Lanka is at risk. If a serious crime happens, it would be an uphill task to get a proper complaint registered at a police station which would lead to the beginning of an investigation. There are hundreds of complaints which take place where the people complain not only on bigger issues but comparatively smaller issues. It is so difficult for people to even register a proper complaint at the police stations.

In one of such incidents on a matter of attempted murder, a man who was the victim and his family made all possible attempts to get a complaint registered. Initially, the relevant police station had no interest in registering the complaint. After much pestering when the police moved to registering the complaint, they did it so carelessly that the affected person did not want to sign that statement. Even after getting this unsatisfactory statement, police made no attempt to visit the crime scene and to do any kind of credible investigation. The man had to go to the ASP, SP many times over and over again over few weeks and despite of many promises no investigation was made. Thereafter he complained to the Inspector General of Police, Police Commission and Human Rights Commission. All he got was a letter from the IGP saying that his complaint will be looked into by a senior officer attached to the area where the incident has taken place. And when this person contacted the assigned officer, he was given a date and when he went there, the investigation into his complaint was postponed for another two months.

That incident is not an exception. That is the way things happen in Sri Lanka to almost everybody who does not have any kind of political clout if he goes to get a complaint registered at a police station.

A neglected policing system with an extremely poor criminal investigation division is what Sri Lanka has to deal with any crimes including such horrible crimes as the Easter Sunday massacre. It would just be nothing less than a joke if those concerned keep on expecting that the criminal perpetrators of this crime would be punished while the nature of the investigating mechanism that exists in Sri Lanka is in such a collapsed state.

It has become the duty of all people of good will, including the religious leaders, the intellectuals and everyone to give highest priority to the demand of immediate actions on the part of the government of Sri Lanka to address the issue of serious defects of the policing system in Sri Lanka and in particular serious defects of the police investigation divisions in Sri Lanka.

If that does not happen, punishing the perpetrators of Easter Sunday massacre will be just to wait for a pie in the sky.

WORLD: An Interview with Basil Fernando on his book Body, Mind, Soul, and Society »