Home / News / PHILIPPINES/WORLD: Her Story Lives: Honoring the Predecessors of the #HijaAko Movement

PHILIPPINES/WORLD: Her Story Lives: Honoring the Predecessors of the #HijaAko Movement

Out of breath from running around the city with a big placard in one hand and a heavy, borrowed tripod on the other, I stood in front of the Japanese embassy in Seoul with eighty other activists demanding for an official apology and reparation from the Japanese government. After that day’s demonstration, Jacqueline Lingbaoan, a Filipino-Canadian volunteer for the House of Sharing, carefully maneuvered an exhausted Lee Ok-Seon-halmoni1  into the backseat of a van.

“Lee Ok-Seon-halmoni was expecting a big crowd today and there was indeed a huge crowd,” she said. “The grandmothers have been standing on the exact same spot for the past thirty years. Now…they have to sit beside everybody else because of their conditions. But their voices are just as loud as it was [back in 1992].”

The Wednesday Protest is a weekly protest that has been held 1,438 times since January 1992. Whenever their health permits a grueling three-hour travel to the city center, I was told that the halmonis makes it a point to endure the long commute to attend the demonstrations. The purpose of this protest is to demand that Japan formally apologize and accept historical responsibility for the atrocities that it has committed against the survivors of military sexual slavery, pay full reparations to the individual victims and to educate future generations by including this tragic piece of history in the Japanese educational curriculum. According to the Korean Council, the “Wednesday Demonstrations have turned into a place for solidarity between citizens and victims, a living site for history education…bringing people together in solidarity beyond gender, age, borders and ideologies.”

Who are the comfort women? After the international backlash that Japan faced following the Nanking Massacre where Japanese troops raped between 20,000 to 80,000 Chinese women, the Emperor ordered the creation of “comfort stations” or military brothels to provide constant sex for soldiers to improve their morale and prevent the spread of sexually transmitted diseases. However, as these comfort stations expanded, Japanese prostitutes can no longer meet the growing demand. As a result, thousands of women from occupied territories were abducted or forcibly conscripted to these brothels. Many survivors testify to have been raped by up to seventy soldiers daily. Women were constantly beaten if they are not compliant or accommodating enough to the demands of their captors. And if they become pregnant, they are immediately subjected to forced abortions in substandard medical facilities. By the end of the war, 90 percent of these women did not survive.

According to historian Yanson Ahn, sexual violence in Japanese comfort stations have become a routinized everyday practice.2 In fact, it is a common sight to see long lines of soldiers queuing up for sex with their “trousers down and underpants already almost off.”3 Many soldiers begin to unbuckle their trousers outside the door and would come out of the room naked.4 Each soldier is expected to finish “intercourse” quickly as there are still next ones waiting for their “turn.” Some were impatient and would even bang the door for the present occupant to hurry up.5 The imagery conjured by these descriptions looks very much like the queue for a public toilet. These women were dehumanized to the extent that their bodies have been reduced to being “toilet structures.”6

My own cathartic exploration of the harrowing plight of the survivors of institutionalized wartime sexual slavery began in the second floor of the Wilfrido Ma. Guerrero Theater in UP Diliman. Who would have thought that a stage production that I attended as an afterthought could bring this much impact on my life? As I was watching the actress who played Maria Rosa Henson (Nana Rosa) endure nine grueling months of enslavement and dehumanizing abuse, I promised myself that I will do everything in my power to keep their story alive. It is true what they always say in those GE classes back in college—art really should “comfort the disturb and disturb the comfortable.” This is precisely the reason why in the last year, I have been spending my summer and Christmas breaks from law school tracking down the remaining survivors of institutionalized military sexual slavery.

On 23 November 1944, mortars rained down the quiet town of Mapanique in Pampanga as the Imperial Japanese Army doused the houses with gasoline while ruthlessly bayonetting every last man they could find. The Japanese soldiers hauled the women in the Bahay na Pula where they were repeatedly beaten, tortured and raped. As a result of the abuse they suffered as children, a lot of the survivors left the village for fear of the stigma and persecution attached to being a rape victim. Some were so traumatized and repulsed of male companionship that they refused to marry and have children.

Holding a red plastic bag of nganga, Isabelita Vinuya (Lola Lita) had a glazed, faraway look in her eyes as she was narrating to me the fateful day when the Japanese Army raided her village. Lola Lita was just eleven years old when she was forcibly taken to the Bahay Na Pula to be brutally raped and subjected to various forms of sexual humiliation and violence. Nearly seven decades later, she filed a case praying for the issuance of a preliminary mandatory injunction against the Philippine government to order the President to espouse their claims against the Japanese government. But when I asked her if she recalls why she lost that highly controversial case, she barely remembered that there was even a case to begin with.

Arguing that the Philippines is bound by the Incorporation Clause in the 1987 Constitution to comply with the jus cogens norms in international human rights law, the petitioners Malaya Lolas in Vinuya v Executive Secretary argued that the Philippine government, in waiving the claims of Filipino comfort women pursuant to the Treaty of Peace is “in breach of its international obligations not to afford impunity for crimes against humanity.”7 Put simply, the Lolas were arguing that failure of the Philippine Government to hold Japan liable is a violation of its international human rights obligations.

Citing the political question doctrine, the Supreme Court dismissed the petition and ruled that the realm of foreign relations is left to the sole discretion of the President and the wisdom of such decision cannot be questioned by the Court.8 In addition, the Court decided that the individual claims of the comfort women were already settled by means of the Peace Treaty with Japan—thereby barring any future claims for reparation.9

Since they lost this case in 2010, Filipino comfort women barely made the headlines of popular news agencies in the country. Since then, many members of the Malaya Lolas Organization and Lila Pilipina have died. Their identities and consequently, their lived experiences were left in the margins of history.

The Predecessors of #HijaAko Movement

Before the #HijaAkoMovement, there were the comfort women. The #HijaAko Movement originated from an online spat between Ben Tulfo and Frankie Pangilinan when Tulfo tweeted that women should not wear revealing clothes so as not to “unleash the beast.” In an attempt to debunk the antiquated misconception that a woman’s clothing causes rape, women from all over the country came forward with their own stories of sexual harassment and abuse. Capitalizing on the amplifying power of social media, this grassroots feminist movement transcends territorial and class boundaries. It sparked meaningful conversations on issues that were previously considered taboo, such as the prevalence of workplace sexual harassment, date rape in college parties, sexual grooming and predatory behaviors of faculty members in Catholic private schools, and the misogynistic “locker room” talk in university fraternity group chats.

We should recognize that the #HijaAko movement is not merely a “Filipinized” incarnation of the #MeToo movement because it is organically built upon the pioneering initiatives of the early activists against gender-based violence and systemic sexual abuse—the comfort women. Self-identification as a comfort woman is deemed as a “symbolic act of rebellion”10 at a time when female chastity and virginity were considered as the most important virtues of a woman. At its core, the HijaAko movement, is founded upon a victim-centered approach which denounces the culture of impunity and “structural silencing”11 that followed these abuses.

“Sabi ni nanay, ‘Kapag muling binigkas, muling nagkakatotoo.’ Kaya sa isip ko lang binibigkas,”says Nana Rosa. For nearly fifty years, Nana Rosa kept her story a secret. But hearing Kim Hak Sun speak out over the radio inspired her and other women from all over the world to break their decades-long silence and tell the story of their abuse. Like what Kim Hak Sun’s 1991 testimony did for Nana Rosa, the #HijaAko movement is all about women empowering women. Since her first press conference in 1992, twenty-nine women came forward within months as they were “encouraged by seeing Lola Rosa on television.”12

These women walked so we could run. We would never have enjoyed the rights that we are enjoying now if not for the collective resistance of those who came before us. True enough, the metaphorical glass ceiling still exists but as more and more women push back, it goes higher and higher. If not during our lifetime, I believe that one day, that glass ceiling will break.

Collective Amnesia and the ‘Politics of Memory’

Despite their valuable contribution to the Filipino feminist movement, there is almost a deliberate and insidious attempt by the State to completely eliminate their stories from our collective memory. In 2018, the controversial statue of a comfort woman along Roxas Boulevard was surreptitiously removed.13 Following the clamor for its reinstatement from several human rights groups, President Rodrigo Duterte released the following statement:

It is not the policy of the government to antagonize other nations . . . Masakit kasi pa na ulit-ulitin mo pa ulit. And you have to start [imagining] how [the comfort women] were treated badly. But Japan has apologized to the Filipinos. And they have certainly made much more in terms of reparations.14

A nation’s collective memory is continually affirmed, negotiated, and contested to perpetuate prevailing ideological narratives and counternarratives.15 Put simply, memory is political. Because “collective memory” is not merely an impartial chronological narration of past events, the act of “remembering” is highly dependent on the current state agenda and the changing tides of politics.16 As much as it can be recognized and commemorated, national trauma can also be silenced and eventually eradicated from national consciousness. This is precisely what the government is doing. Because the recognition of the comfort woman issue would only compromise the country’s bilateral relations with Japan, the government chooses to encourage the Filipinos’ “collective amnesia” by deliberately putting the grandmother’s struggle in the back burner.

I have always believed that memorialization of history and the establishment of statues help us confront and heal from the painful narratives of the past. And so, a few hours before my scheduled flight back to Manila, I laid flowers at the bronze statue of a girl—the Statue of Peace promising her that her story—their story—will never be forgotten. 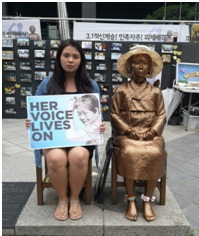 Your voice lives on.

Ma. Hazel Joy Faco is a Juris Doctor student specializing in International Human Rights Law in Ateneo de Manila University. In 2017, she graduated with a degree in Political Science in UP Diliman. Formerly a legal intern for the Humanitarian Legal Assistance Foundation, she now works for the Commission on Human Rights – Child Rights Center and the Ateneo Human Rights Center.

1. Halmoni (할모니) is the Korean word for grandmother, and also a polite term of reference given to any woman old enough to be your grandmother.

14.  Duterte on comfort woman statue: ‘You can place it somewhere else’, Rappler, April 29, 2018, available at https://www.rappler.com/nation/201348-duterte-comfort-woman-statue-roxas-boulevard-removed (last accessed July 7, 2020).