Home / News / SRI LANKA: How the poor pay for the national debt and for corruption?

SRI LANKA: How the poor pay for the national debt and for corruption? 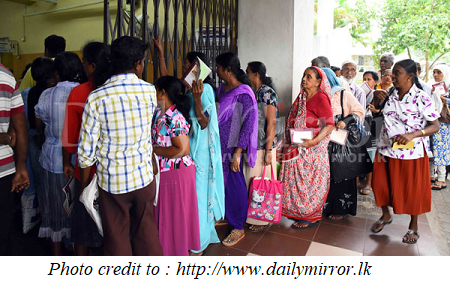 The one of the most frequent practices in the public hospitals now is that patients have to pay for everything. For example, a patient undergoing an operation has to buy everything from outside shops, even the plaster that is used to cover the wound caused by the operation. This explains to the extent to which public health system has become privatized to the great disadvantage of the poorest section of the Sri Lankan society. Virtually, many other things such as the needle used for the operation and most of the medication has also to be bought from outside shops. In addition, it is only on those conditions that the operations are conducted.

The blame, of course, is not with the doctors concerned but with the allocations made by the government for the expenditure relating to the health care. In many instances, the poor who are not able to meet with this cost have to go without treatment and thus causing serious threats to their lives themselves.

A sympathetic doctor would often advise the patients even in cases of cancer to not to rely on the medication they receive from the hospital because of its poor quality. They would advise anyone who can find the means to buy the prescribed medicines from the private chemists so as to ensure that the medicine they receive meet with the required quality.

List of the hassles that the average citizens of Sri Lanka go through in their attempt to get medical care could be a long list. The purpose of this statement is not to make such a comprehensive list but to highlight the problem of difficulties that has been caused to the health care of the citizens purely due to much of the national income going for the payment of interest for foreign debt and also the high cost of corruption.
As the payment of such debts and the cost of widespread corruption is imposed on the people, the people are facing the lowering of their quality of life and particularly the quality of health care. It is an irony that taxation has increased and spread into all areas of life, what the people get into return also becoming lesser and lesser.

Bad health care in public institutions means many deaths taking place which are preventable. When the doctors and others involved in the health care acquire habits of mind and attitudes which arise from the resignation to be unable even to help patients suffering from curable illnesses; such mental attitudes themselves become a contributory factor to increase in deaths and other forms of suffering.

Deprivation of basic health care is an extreme expression of cruelty that gets entrenched in the bureaucracy as well as among the people themselves. When the people perceive that their system of governance is a cruel one they have no option but to withdraw from the organized society and look for whatever solution they could find within their own resources.

Those who have the most meagre resources may even want to ignore their illnesses and to resign themselves to their impending fate. Under these circumstances, the claim that Sri Lankan cultural system is based on deep religious values becomes a ridiculous claim. The essential feature of any genuine religious endeavor is to lessen the cruelty and to increase the empathy for each other. Where this is absent mere gestures and garbs of religion is sheer mockery.

While these months are talked about as election months the issue of the pathetic situation of the public health care system is not being treated as a major problem to be solved. That implies that whoever comes to power will not make any attempt to make the situation better in this regard. Thus only possible prediction is that the future will be worse than even the very bad situation that prevails now.

If health issue is to become a major issue in the coming elections that could happen only if there are intellectuals and civil society organisations who are willing to bring this issue to the forefront of the mainstream political discussions. Big words like reconciliation make little meaning when overall ethos that prevail in the country is one of self-perpetuating cruelty. No great unity of any sort could be achieved in a country where people cannot even expect basically decent medical care when they are sick.

« THAILAND: CONTEMPT OF COURT over critics of decision on MP’s media shareholding