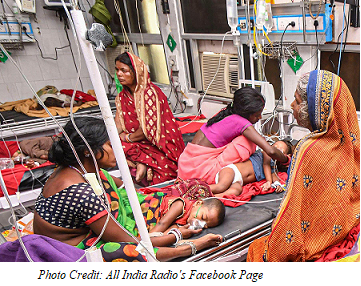 How many wickets- asked Mangal Pandey, Health Minister of Bihar during a press conference to know the current status of India Pakistan clash in the ongoing Cricket World Cup. It is just that he asked the question in the middle of a meeting of health department to tackle the outbreak of Acute Encephalitis Syndrome (AES) in the state which has already killed over 100 children in just one hospital- Sri Krishna Medical College and Hospital (SKMCH), Muzaffarpur. The Union Health Minister of India Dr. Harsh Vardhan, his junior, Minister of State (MoS), Health Ashwini Kumar Choubey and health department officials were also in the meeting. The apathy, the disdain for the lives of the children leaves nothing more to say. Or perhaps it does.

Mr. Pandey was not the only Minister worried more about Cricket score while children died on his watch. MoS Choubey had pulled out a feat of his own before this meeting. He was caught sleeping in a press conference addressed by Dr. Harsh Vardhan though he later tried to escape the criticism by claiming that he was ‘meditating’ and not sleeping.

The behavior of the two ministers sum the state of public health in India where the authorities wake up only after such tragedies, that too if they make it to media scrutiny and public outrage. The outrage was there this time. People across India could see horribly inadequate number of beds in the Intensive Care Units forcing 3, at times 4, kids to share them. They could see that the number of doctors was far from required. They could see doctors telling on camera, and thus on record, that they do not have enough medicines to treat AES.

They know that only thing which can avert such tragedies is an urgent and immediate overhaul of the public health system and institutions in India, as the poor can afford only them. Yet, they try to hoodwink the people with knee jerk, cosmetic remedies, promise overall overhaul of the system to stop such tragedies from recurring. Once the situation comes under control, they go back to business as usual waiting for another crisis.

Think of it, this is not the first outbreak of AES in the area. AES, along with Japanese Encephalitis, is a recurrent killer in the region. It has claimed lives of over 26,000 children in one single hospital of Baba Raghav das Medical College in neigbouring Uttar Pradesh’s Gorakhpur. The story remains the same in Muzaffarpur as well- AES killed 379 children in SKMCH alone in 2014 and caused a similar outrage. The then, and also current, Union Health Minister Dr. Harsh Vardhan had rushed to Muzaffarurpur then too- just like he did now. He had then announced a plethora of measures- a 100-bed super specialty hospital, a10-bed facility for treatment of children. He had also promised to build a virology laboratory in Muzaffarpur- both the hotbed of AES as well as only hospital, even if inadequately equipped, people from neighbouring districts like Sitamarhi and Motigari too rush to.

Cut to 2019, a full 5 years after those announcements and returning as Union Health Minister in the reelected government- Dr Harsh Vardhan rushed to the SKMCH and repeated all the announcements down to the virology laboratory while his junior, MoS Health Mr. Choubey slept away to glory or meditated- whatever one wants to believe. Not a single journalist in the presser asked him why the same promises made in 2014 remained unfulfilled until the second bout of the outbreak.

The reason behind that is not hard to guess though. The 2014 outbreak of AES killing 379 children had led to a massive uproar, and consequently, some action by the government at both state and union level. The Bihar government went into consultations, particularly with UNICEF and came up with a standard operating procedure (SOP) in 2015. The SOP included household surveys by the auxiliary nurse midwife (ANM), accredited social health activists (ASHA) and anganwadi employees to check if any child has symptoms of Japanese encephalitis and AES. The efforts paid up. Death toll started going down. As against a toll of 424 in 2012, 222 in 2013 and 379 in 2014; 2015, 2016, 2017 and 2018 saw an almost dramatic with a toll of 90, 103, 54 and 33, respectively.

Of course losing even 33 young lives is losing too many, in a country where the lives of the poor come dirt cheap, the dip was enough to chase the issue out of national gaze. Then 2019 happened. And the gaze returned. So did the minsters, what if repeating promises, sleeping, meditating, and asking about scores.

Can anything get worse than this? Of course, it can. So after the ministers came ‘electronic media’. The prime time anchors entered the Intensive Care Units without gowns, gloves and mosques and almost shoved their mics in the mouths of the overburdened doctors and nurses: why there are not enough beds? Why you are not attending this kid (the doctor was attending another)? Why do you not have necessary equipment? They did not ask any of these questions to the authorities duty bound to provide these facilities though.

They told them the score, of India Pakistan cricket match when asked.

So what’s the score now? 130 children dead, and counting sir, until the next.

# # #
About the Author: Mr. Avinash Pandey, alias Samar is Programme Coordinator, Right to
Food Programme, AHRC. He can be contacted at avinash.pandey@ahrc.asia.