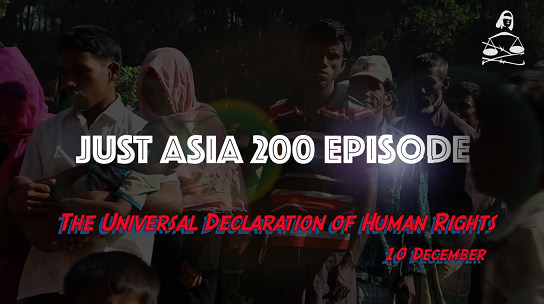 Just Asia completes its 200th episode this week. The Asian Human Rights Commission (AHRC)’s news programme was launched on 14 October 2013 as the Weekly Roundup, and provided a platform for the stories of those fighting for human rights throughout the Asian region. On its 100th episode, the news program evolved into Just Asia. Basil Fernando, Director of Policy and Programme Development at the AHRC shares a message on this occasion.

This week Just Asia focuses on International Human Rights Day, celebrated annually on December 10 to mark the adoption of the milestone Universal Declaration of Human Rights in 1948. While the rights enshrined in the Universal Declaration are inherent to all human beings without discrimination, the fight to realize these rights continues. On this Human Rights Day 2017, the situation of human rights in Asia remains grim, with governments restricting and oppressing rights, and those fighting for them. Cambodia and Bangladesh are seeing intensive crackdowns on the freedom of expression of journalists, political partiesand activists, while Burma’s violence against its Rohingya minority is something the Asian region has not witnessed in the near past. Just Asia speaks to Bijo Francis, Executive Director of the AHRC, for his thoughts.

Moving to Pakistan, despite being a signatory to several international conventions and treaties, the country sees the daily violation of nearly all human rights with impunity. Particularly troubling are disappearances, attacks on journalists and militancy. For details, Just Asia speaks to Baseer Naveed, senior researcher at the AHRC.

India has witnessed considerable criminal neglect towards the life of ordinary citizens in 2017, from farmer suicides to beef lynchings, to custodial deaths. Most recently, the country has seen deaths from severe tropical cyclone Ockhi, which hit the southern states of Kerala and Tamil Nadu this past week. Despite advance information available, the authorities failed to communicate the impending danger to families living directly in the cyclone’s track. Just Asia speaks to Mr. Naveenachandran, Secretary of Nervazhi, a human rights organisation working in Kerala, for further details.

Indonesia’s theme for Human Rights Day 2017 is the 1965-1966 massacres. These massacres, committed by the army under former dictator Suharto, are the most heinous crimes in Indonesian human rights history. Victims and activists are calling on President Joko Widodo to eradicate impunity in the country and ensure justice. To learn more, Just Asia speaks to Mr. Bedjo Untung, the Chairperson of the 1965 Murder Victim’s Research Foundation (YPKP 65)

In Nepal, 2017 saw no progress in the overall promotion and protection of human rights. Victims of the conflict period continued in limbo, with the transitional justice bodies having done nothing but collect some 60,000 complaints. Even in 2017, the government has not yet managed to provide all the victims of the 2015 earthquake with adequate resources and loans to rebuild their homes.

Thailand has had a tumultuous year, with the adoption of a new constitution entrenching unaccountable and abusive military power, in a referendum marked by repressive tactics against critics. Thailand has yet to ratify the International Convention for the Protection of All Persons from Enforced Disappearance, and its Penal Code still does not recognize enforced disappearance as a criminal offense. For more information, Just Asia interviews Ms. Pratubjit Neelapaijit, the National Human Rights Officer of the OHCHR.

On Human Rights Day 2017, Sri Lanka’s major threat to the achievement of human rights comes from problems faced by the country’s justice administration system. Rights are meaningful only when they can be realised through a proper system. For further details, Just Asia speaks to Fr. Nandana Manatunga from the Human Rights Office, Kandy.

« NEPAL: Government must move beyond partisan interests for realization of rights

INDIA: Judiciary fails to stand up for equality, justice and human dignity »