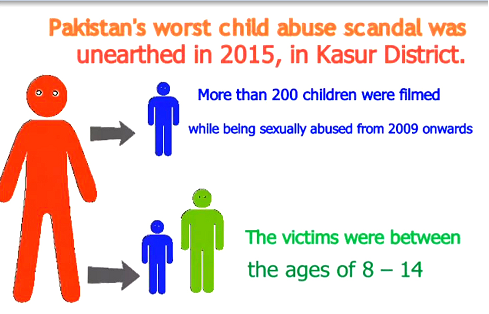 Child sexual abuse cripples Pakistan, and its future. Cases go unreported as the subject is taboo and attracts the wrath of the religious clergy. Sexual abuse is perceived as shameful and hence hundreds of innocent children live their lives in the shadow, reliving memories and trauma of the assault. Worst of all, no matter how heinous the crime, few victims in Pakistan want to report the incident to the police, and this is the tragedy of the nation. By allowing the cases of sexual abuse to go unreported the State is neglecting its constitutional duty to safeguard the rights of its citizens, especially the most vulnerable.

Pakistan’s worst child abuse scandal was unearthed in 2015, in Kasur District. More than 200 children were filmed while being sexually abused from 2009 onwards. And, the latest reported statistics show that 1,974 girls and 1,794 boys have been abused in Pakistan in 2015.

Please find the link of Board animated video here….