AHRC TV: Calls for resignation of Pakistan’s Nawaz Sharif amidst corruption charges and other stories in JUST ASIA, Episode 179 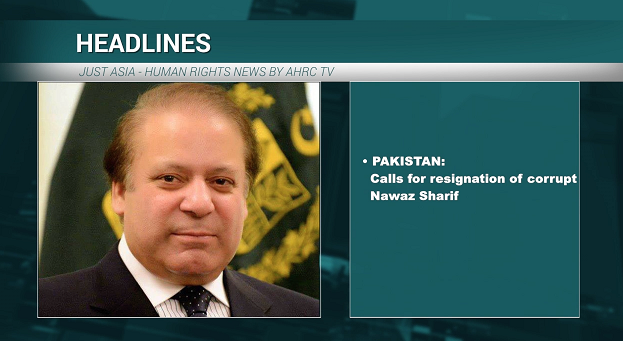 This week Just Asia begins with Pakistan, where Prime Minister Nawaz Sharif has been found guilty of corruption by the Supreme Court’s Joint Investigation Team. The team found the Sharif family wealth to be beyond their sources of income. The country’s political parties and Bar Associations are now demanding Sharif’s resignation.

Moving to Burma, the government has refused entry to the UN investigation team looking into abuses in Rakhine state against the Rohingya. In the meantime, a People’s Tribunal will be held in Malaysia in September, with witness testimonies regarding Burmese military atrocities. Just Asia speaks to Adem Carroll, Burma Task Force Director for New York and UN programs, for more information.

Land conflicts continue in Indonesia, with 600 small scale farmers recently losing their land in West Java province to the Pertiwi Lestari Company. The farmers faced terror and intimidation from the company and the police, resulting in a total 275 households leaving their homes and fleeing to Jakarta. They have been living in tents for the past two months, with little attention from the government.

In India, the Jammu & Kashmir State Human Rights Commission directed the government to pay Rs.1 million compensation to Farooq Dhar, the civilian used by the Indian Army as a human shield in April. While the compensation is a breath of fresh air, it is disappointing that the Commission made no comment on the role of the Army in the incident.

As Nepal’s capital city of Kathmandu has become the world’s third most polluted city, air pollution is Nepal’s biggest cause of premature death, overtaking poor sanitation and lack of clean drinking water. The pollution and dust stems from a range of issues, including agriculture, waste burnings, brick kilns, engine emissions, and ongoing construction work.

Thailand’s new migrant law imposes harsh penalties on undocumented migrant workers, causing many of them to flee back to their home countries. While the government claims that the new law is needed to clamp down on trafficking and the large number of illegal workers in Thailand, rights groups disagree.