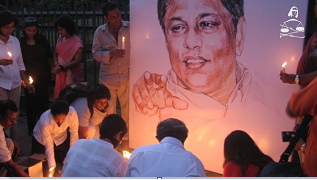 In Nepal, the eve of World Press Freedom Day saw the arrest of Robert Penner, a Canadian national working at an IT company in Nepal, for allegedly inciting disharmony and jeopardizing national integrity through social media. His employment visa was revoked, and Penner was ordered to leave the country within two days. Just Asia caught up with Rajendra Maharjan, Editor of the eSamata online, to learn his opinion on the status of freedom of expression in Nepal.

Pakistan ranks as the fourth most dangerous country in the world for journalists, according to an International Federation of Journalists (IFJ) report. Journalists in the country continue to face threats, attacks and killings by State as well as non-State actors. The State’s failure in prosecuting those responsible leads to a culture of impunity.

In India, Urmila Pullat speaks to journalist Malini Subramaniam to get her views on press freedom in the country. Ms. Subramaniam has worked in one of the most sensitive and challenging parts of India, violence affected Chattisgarh, reporting on human rights abuses in the region.

Although Sri Lanka has moved up 24 positions in the World Press Freedom Index, it is still lowly ranked at 141 out of 180 countries. Despite promises of good governance and media freedom by the new government, so far no serious investigations have been conducted into the abductions, harassment, and killings of several journalists that took place during the past regime.

Although Indonesia has seen a significant improvement in press freedom since President Soeharto stepped down in 1998, there are no laws to protect journalists. According to the Independent Journalist Alliance (AJI), 50 cases of murder, violence, intimidation and forced dissolution of events organized by journalists annually over the past 10 years. Just Asia speaks to journalist Mr. Tomy and public defender Mr. Ade Wahyudin for their views.

« INDIA: Two people killed and several injured due to police firing at a public protest in Arunachal Pradesh