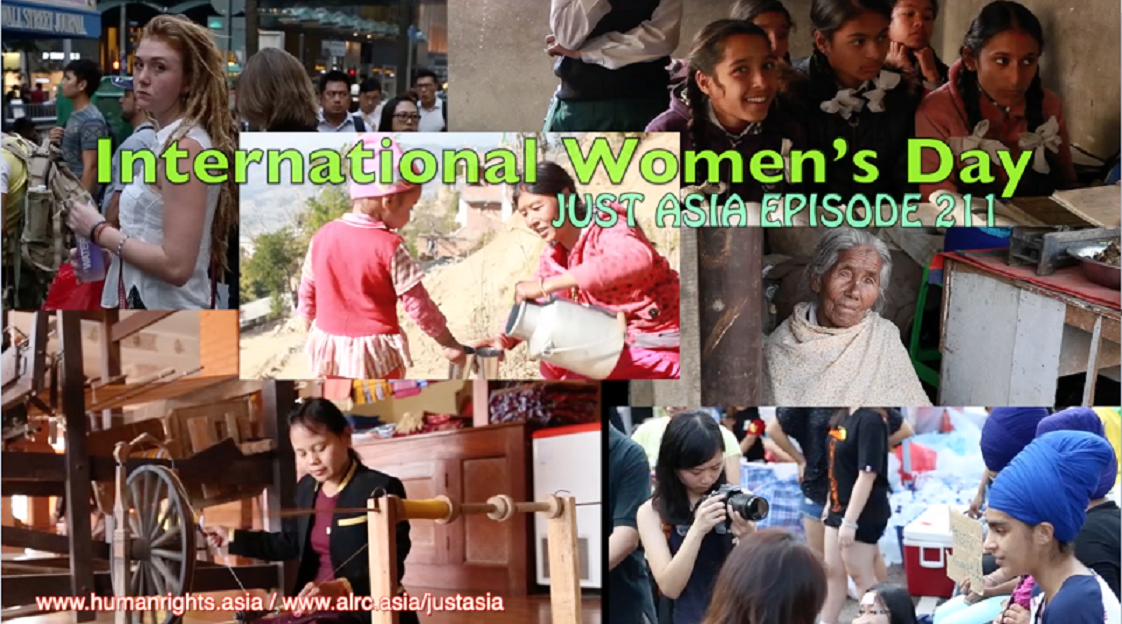 This week Just Asia focuses on International Women’s Day, celebrated annually on March 8. The day is an opportunity to reflect on progress made, to call for change and to celebrate acts of courage and determination by ordinary women in the development of their communities.

In Indonesia, women rights activists from various civil society organizations organized peaceful protests and discussions to commemorate International Women’s Day. During the rally, women activists called on the government to review discriminatory laws and regulations in order to achieve gender equality. They also noted that violence against women, particularly migrant workers, continued to be a problem. The recent murder of migrant worker Adeline in Malaysia has spotlighted this issue.

Thailand’s National Human Rights Commission awarded honor prizes to 10 women on the occasion of International Women’s Day, celebrating their work in protecting and promoting fundamental rights in the country. The women activists were from various fields, including public services, media, civil society and NGOs. Just Asia speaks to one of the prize winners, Ms. Supaporn Malailoy, the Manager of Enlaw Foundation, regarding her views on challenges facing women in Thailand.

Next, in India, Just Asia speaks to AHRC’s desk officer, Urmila Pullat, on her work as a gender rights activist and lawyer, running the website project How Revealing. How Revealing is an online repository for people to share experiences of sexual assault and gender-based violence. On International Women’s Day 2018, Urmila discusses the significance of the project and what she has learnt in the one year of its existence.

Moving to Pakistan, a Hindu woman from a lower caste has been elected to the senate for the first time in the Muslim-majority country. The election of Krishna Kumari, a 39-year-old human rights activist and member of the Pakistan People’s Party, is seen as a landmark moment for Pakistan’s generally oppressed religious minorities, especially Hindus. Religious minorities face routine violence and discrimination in the country, and live in fear for their lives and property.

In Nepal, rights activist Ms. Ambaya Khatun was kicked in her stomach and chest by a female police officer stationed at the Rautahat District Court. Ms. Khatun was trying to assist Mrs. Salimu Nesha Khatun who wanted to go to a courtroom to witness the court proceedings relating to the killing of her grandson. Just Asia speaks to Ms. Khatun for further information.

Finally, the Urgent Appeals Weekly features two cases from India and the Philippines.

INDIA: Human Rights Defender and family in Manipur intimidated by the Army and the Manipur Police »