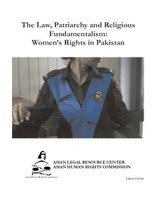 The Asian Legal Resource Centre (ALRC) and its sister organisation the Asian Human Rights Commission (AHRC) are pleased to announce the online edition of a new publication: “The Law, Patriarchy and Religious Fundamentalism: Women’s Rights in Pakistan”. The publication counts a total of 254 pages which include the research conducted on the topic, a selection of 30 cases covered by the AHRC in the past few years and four appendixes. It may be found here.

While referring to a number of actual cases in order to document the numerous violations of basic human rights which the women of Pakistan suffer, the publication also explores the recent historical background and the cultural patterns of the country in an attempt to define the main reasons behind the gross forms of abuses and discrimination taking place. A deeply patriarchal mentality and a gender-biased interpretation of the religious texts are presented as twining components, impacting both society and institutions.

The book also discusses the prevailing poor and weak criminal justice system and the absence of the rule of law with regard to women. It also mentions the patriarchal mindset of judges and courts, particularly those of the lower judiciary, which through its working provides impunity to the perpetrators. It is a major flaw of the working of the courts, which decide cases on the basis of state versus accused persons but the victim’s point of view is never taken into consideration.

The main purpose of this publication is to offer an overview of the most common and merciless forms of inequalities experienced by half of the population in Pakistan and which affect not only victims and survivors, but society in its entirety. Throughout the book, several reflections are shared as possible measures to raise awareness and bring about improvements and change.

The book is written in accessible and clear language and may be seen as a possible working tool for human rights organisations focusing on women, as well as an explanatory reading for people interested in gender issues, such as staff of governmental and non-governmental organisations, students, activists and so on.

Copies of the book may be obtained by request from the Asian Legal Resource Centre through the contact details given below.

INDONESIA/HONGKONG: Punishment should be imposed on agency and employer responsible for the abuse of an Indonesian worker in Hong Kong »