The public does not want a government mouthpiece, says panel review member

The public service broadcasting review by the government should examine different models of financing for RTHK, including making it independent like the MTR Corporation and the Hospital Authority, a member of the review panel says.

Mathias Woo Yan-wai, creative director of the Zuni Icosahedron theatre group, said there was a public consensus that the public broadcaster should not be a government mouthpiece.

Speaking at a forum at the Foreign Correspondents’ Club (FCC) in a personal capacity, he said: ‘It should serve the public, not serve the government.

Mr Woo lamented the lack of quality discourse on current affairs in Hong Kong. He said his vision of the city’s public broadcaster was one of a ‘global international vision’ rather than just a community channel.

‘If Hong Kong is an international city, why should the public service broadcaster not have an international vision and have programming in Cantonese, Putonghua, English, even other languages,’ he said. 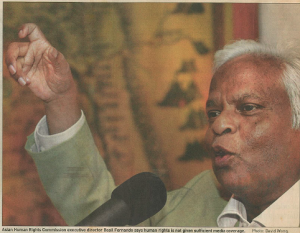 ‘It is very important to have proper public service broadcasting – there is not enough focus on the quality of the content today.’

Frontier lawmaker Emily Lau Wai-hing told the forum that RTHK, as a public service broadcaster, should be ‘at arm’s length’ from the government and must have a stable source of financing.

‘A public service broadcaster is very different from a state broadcaster. Unfortunately, some people in Hong Kong have mixed the two up … they criticise or attack RTHK for biting the hand that feeds them. They want RTHK to be a propaganda machine.’

At a separate forum on human rights and the media, also at the FCC, Asian Human Rights Commission executive director Basil Fernando said human rights was not covered extensively enough by the media, which did not give such stories the importance that traditional ‘important issues’ received.

He said historically significant events in Nepal and Thailand recently, which had major implications for the development of democratic governments, received inadequate coverage in most media.

Mr Fernando highlighted the important role of the media in exposing rights violations and bringing them into the public domain.

« CAMBODIA: “Cambodians can remain pawns, or can hang together against Sen’s autocracy”