Home / NEPAL: Joint Statement on the Occasion of the International Week of the Disappeared 2021

NEPAL: Joint Statement on the Occasion of the International Week of the Disappeared 2021

On the occasion of the International Week of the Disappeared 2021, we, the undersigned human rights organizations and victims’ associations of Nepal reaffirm our position to the government of Nepal to undertake immediate steps towards a reawakening of the stalled TJ process by adopting a transparent and consultative process for amendment of the law.

We call on all levels of government to ensure access to health, vaccine and other basic needs of the conflict victims affected by the COVID-19 pandemic with high priority.

Every year, in the last week of May, the victims and their families along with the international human rights community, commemorate the International Week of the Disappeared, initiated in 1981 by the Latin American Federation of Associations of Relatives of Disappeared-Detainees (FEDEFAM) during its first Congress in San Jose, Costa Rica.

This year, we pay tribute to the strength and courage of the victims and family members of the disappeared persons and express our unwavering solidarity with the families in their persistent quest for truth and justice.

At these trying times when the entire human civilization is threatened by the alarming spread of COVID-19, the families of the disappeared – the majority belonging to the downtrodden sections of society, are among the hardest hit. With the State constantly turning a blind eye to the long pending demands of the conflict victims, the ongoing pandemic has further added insult to injury, pushing them to extreme economic crisis. Extended prohibition orders enforced by the government without proper plans for food security, income generation, health and other basic services have left the victims of human rights violations in a state of utmost grief and despair.

While commemorating the International Week of the Disappeared, we would like to point out that it has been more than six years since the Supreme Court (SC) of Nepal ordered the Government to amend the Enforced Disappearance Enquiry, Truth and Reconciliation Commission Act, 2014, in line with international human rights standards making amnesty impermissible for those involved in enforced disappearances. More than a year has lapsed since 27 April 2020, when the full bench of the SC rejected a petition filed by the Nepal Government demanding a review of its previous order. Yet, the Government has not taken any concrete steps to advance with the amendment.

Despite the National Penal Code, 2017 criminalizing enforced disappearances, no cases thus far have been investigated under this Code as police authorities refuse to initiate criminal investigations on the pretext that these cases will be duly dealt with by the transitional justice (TJ) mechanisms – the Truth and Reconciliation Commission (TRC) and the Commission of Investigation on Enforced Disappeared Persons (CIEDP). The national and international human rights community is well aware of how these TJ mechanisms have been nothing but a political instrument functioning at the behest of their political masters. Disappointed by these Commissions not being able to ascertain the fate of a single case of enforced disappearances, despite having more than 5 years of their mandates, human rights organizations and many victims groups have ceased engaging with these Commissions. The Commissions have been used as a means to blatantly delay, dilute and derail the TJ process and obstruct victims’ access to truth and justice.

The undersigned organizations therefore, call upon the Government of Nepal:

– To ensure truth, justice and effective remedy to victims and families of the disappeared;
– Start fresh consultations to amend the law in compliance with international human rights law and the Supreme Court’s directives, including the scrapping of provisions allowing amnesty for perpetrators;
– To revise the Penal Code to bring it in line with international standards including the revision in the penalty for an enforced disappearance to make it proportionate to the gravity of the crime;
– To reconstitute the Commissions, and appoint a new set of commissioners under the revised Act that respects victims basic right to truth and justice;
– To investigate, prosecute and punish crimes of enforced disappearances under the new Penal Code;
– To remove statute of limitations to file complaints in enforced disappearance cases;
– To ensure fair and equitable distribution of COVID-19 relief packages and health services and take care of the basic needs of victims of human rights violations;
– Immediately ensure the social, cultural, economic, psychological and legal support to the victims and families of enforced disappearance as a part of victims’ right to reparation;
– Ratify International Convention for the Protection of All Persons from Enforced Disappearances Punishment. 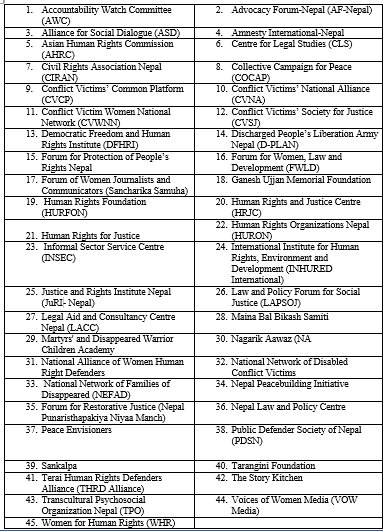