Home / NEPAL: Joint Press Release on the occasion of the International Day of the Victims of Enforced Disappearances

NEPAL: Joint Press Release on the occasion of the International Day of the Victims of Enforced Disappearances

A joint press release by the Asian Human Rights Commission and the undersigned victims’ groups, national and international organizations urging the Government of Nepal to take urgent steps to ensure the rights to truth, justice and reparations of the families of the enforced disappeared on the occasion of the International Day of the Victims of Enforced Disappearances (30 August).

The Comprehensive Peace Agreement (CPA) between the Government of Nepal and the Communist Party of Nepal (Maoist) signed on 21 November 2006, which marked the end of the conflict, promised to make the whereabouts of those forcefully disappeared public within 60 days. However, that promise still remains unfulfilled even after 16 years.

The Commission of Investigation on Enforced Disappeared Persons (CIEDP) was established together with the Truth and Reconciliation Commission (TRC) in 2015, under the Investigation of Enforced Disappearances, Truth and Reconciliation Commission Act, 2014 (TRC Act) with the responsibility of finding truth and investigating the conflict-related human rights violations, including enforced disappearances. Despite spending millions of taxpayers’ money, these Commissions have not clarified the fate of any disappeared person. A number of sections of the TRC Act were challenged by the victims as they mandated the Commissions to recommend amnesty for those involved in gross violations, including enforced disappearances. The Supreme Court in 2015 ordered the Government to amend the Act, which also remains long overdue, thereby adding additional anxiety for the families already long-suffering in pain and anguish.

Recently, the Ministry of Law, Justice and Parliamentary Affairs has initiated a process to amend the Act raising some hopes. The Ministry has tabled a Bill for the Amendment of the TRC Act (TJ Bill) in the Federal Parliament on 15 July 2022. The TJ Bill, however, failed to incorporate the concerns of the victims, civil society and the rulings of the Supreme Court.

Expressing their concern over some of the specific provisions of the TJ Bill, victims and CSOs have been calling for honest efforts from the Ministry and all political actors to amend the Act respecting victims’ right to truth, justice, and reparations and guarantee non-recurrence. They have submitted a four-column (char mahale) document with their concrete recommendations for reforms on a number of problematic sections of the Bill. As the Parliament moves towards approving the Bill, potentially through fast track means without meaningful consultations, we undersigned organizations are calling on the Government of Nepal:

• To revise the problematic provisions of the TJ Bill before passing it as a law, making it victim-centric and promoting accountability,
• To follow the required parliamentary procedure while passing the TJ Bill, making it transparent and consultative,
• To consider the victims’ concerns and recommendations expressed in the ‘four mahale’ document,
• To ratify the International Convention for the Protection of All Persons from Enforced Disappearances,
• To implement the decisions adopted by the United Nations bodies on the cases of enforced disappearances in Nepal,
• To ensure that the families of victims of enforced disappearances have access to the regular justice system when TJ mechanisms are not functioning.

We also call upon the international community:
• To closely monitor the TJ process in Nepal and advocate for the amendment of the TJ Law to bring it in line with Nepal’s national and international human rights obligations. 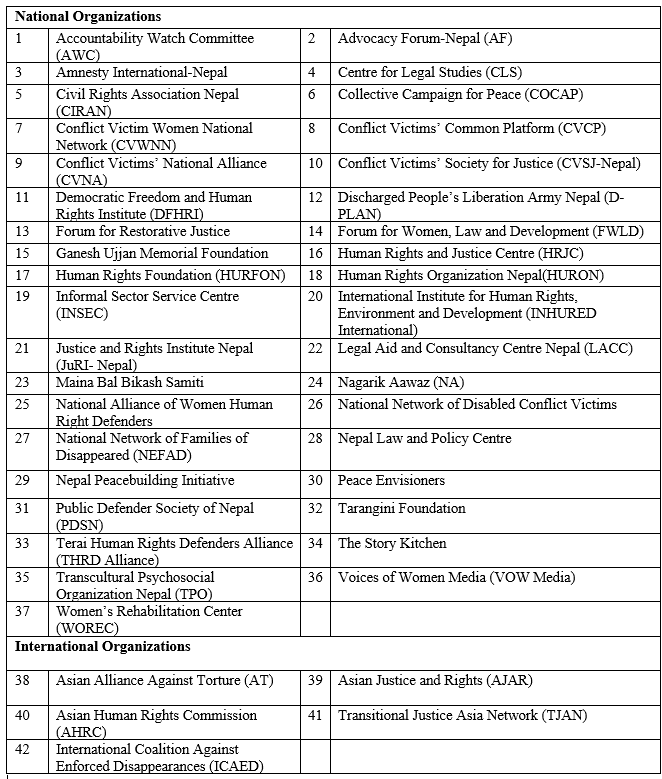