The Home for Victims of Torture 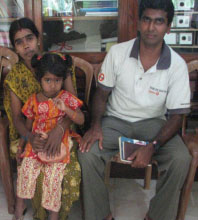 Nandakumar and his family

Nanda Kumar was arrested on April 17 2008, while he was working at the BOI in Balagolla. He was arbitrarily arrested by officers attached to Kandy Police Station without a warrant. After his arrest he was detained at Daulagala Police Station until 22nd August 2008.

While at the remand prison on two occasions he was referred to the mental hospital Angoda, however, the doctors found him to be normal. Nanda Kumar was also sentenced to six months for contempt of court in 2009 as he spoke loudly on behalf of her mother who signed for bail, for another suspect and she was warranted by the magistrate. On another occasion when Nanda Kumar pulled out a bag that contained some documents, the whole court house ran for their lives including the magistrate creating a pandemonium, fearing that Nanda Kumar was going blow up the court house.

Nanda Kumar’s only brother Ramesh Kumar was also arrested on the 19th April 2008 and is still detained at the Bogambara remand prison.

Nanda Kumar and Ramesh Kumar were accused of being involved: in killing the SSP Upul Seneviratne in 2006 in Digana with a claymore mine, involved in setting up a bomb in a public transport bus which was blown up in Dambulla in 2008 killing a number of passages, involved in weapon training, transporting weapons and, hindering public security and conspiring against the government.

Both Nanda Kumar & Ramesh Kumar were severely tortured while in police custody. Nanda Kumar claims that after his arrest, four or five police officers at the Kandy police station (TID section), stripped him naked, hung him from the ceiling, and bound his legs with a string. While he was hanging upside down, the police officers had him beaten all over his body while questioning him. He was forced to accept all the accusations by signing the already typed documents. He was also told that his wife and the mother had been arrested and that if he refused to sign the said documents that they would be tortured as well.

He claims that he was routinely tortured while in police custody by the TID officers.

After his release Nanda Kumara complains that he cannot do any work due to continuous severe headaches and severe pain in his body. Nanda Kumar’s wife feels very insecure having him at home without any protection.

Nana Kumar claims that he has served the Sri Lankan Army for two years from 2002 to 2004.

About the Author:
Homes for Victims of Torture is an organisation committed to the protection of torture victims and their families

About AHRC: The Asian Human Rights Commission is a regional non-governmental organisation monitoring and lobbying human rights issues in Asia. The Hong Kong-based group was founded in 1984

HONG KONG/PHILIPPINES: Territories and countries — complaining with and without protection »