Home / PHILIPPINES: Torture victims speak out- “Under torture, I thought I was dead” Interview 12

PHILIPPINES: Torture victims speak out- “Under torture, I thought I was dead” Interview 12

In this twelfth interview, Hamsa Pedro, a labourer at a public market, talks about how he and his family suffered for seven years and continue to suffer after his illegal arrest, detention and torture. The policemen in General Santos City arrested him from a crowded public market, but none of those who had seen him forcibly taken helped due to fear. He was taken to a private hotel and tortured him there for nine days.

For nine days, they punched and kicked him, suffocated him by wrapping his head with plastic bags and wrapped his eyes with adhesive tapes. He urinate blood due to the severity of the beatings. The torture was so severe that he can still feel the pain today. His eyesight has also been badly affected.

The policemen deliberately hid him from his family. Hamsa’s wife, Fatima, who had gone to all the military camps and police stations looking for him, only came to know of his whereabouts when a neighbour who saw her husband at the court told her. Fatima also talks about this in a separate interview.

Under torture, Hamsa thought he was already dead. He also thought it would have been better had the policemen killed him so his family would have no problems.

Hamsa, the breadwinner in his family of ten, including young children, at the time of his arrest, now begs from policemen that if they still have mercy left they should help in clearing his name. He worries about his children who may not have eaten because he is in jail.

Interview 12: “Under torture, I thought I was dead”

(Note: Below is the English version of her interview originally conducted in Cebuano) 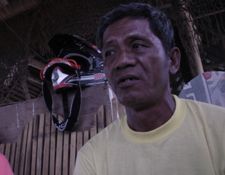 I am Hamsa Pedro. First, I was captured in the place where I was working. It was Monday at 4:30pm. I wonder why they pointed their guns at me there. I asked them: what did I do wrong? The interviewee just told me to explain everything at the barracks (General Santos City Police Office Headquarters). They were many surrounding me and pointing guns at me. That is why I wasn’t able to move and so I went with them. They dragged and threw me inside their truck hitting my face on the floor of the vehicle. Inside the truck, they stepped on me.

We reached the Family Country Hotel. They tortured me there. They wrapped my head with a cellophane/plastic, they kicked me. I could not answer their questions whether I know the names of person they were asking me because I do not know who they were. They hurt me so bad. I really can’t answer them because I do not have any idea with the names they are asking me. And if I could not tell them, they hit me. I experienced all the pain I could possibly think of. I urinated in my underwear from the beating. They dragged me to the toilet. I can barely move my hands because it was badly hurt. They even beat me here (showing part of his body). I don’t know what they used to hit me that even up to now it is still very painful. My forehead was beaten with their slippers. My eyesight is blurred since then. That’s the reason.

I endured a lot of torture. Every person who comes in kicked and hit me. The (police) told me that they had to work overtime because of us, that we bombed the public market. I told them that I did not do it and I was only a labourer at the public market. Sometimes they put tissue paper in my ears and wrapped my eyes with packaging tape. I thought to myself that I may have been dead because they put tissue on my eyes and ears already. They wrapped my head with cellophane. They used two bags. I thought I would die. I felt my eyeballs would come out. I already had the difficulty of breathing. There is also this very cold beverage that they made me drink. I don’t know what it was but it was very cold. I did not drink it at once thinking it would harm my intestine. It was really cold.

I was just wearing shorts at that time and so untidy because I came from my work. They changed my name into Elmer Emran and they were really insisting that it was my real name. They told me that I am an Indonesian. I’m not an Indonesian, I’m a Filipino. I cannot recall the exact date when they brought me to the court. Someone saw me there. The person tried to stand up but I told the person not because they (police) might him/her thinking he/she would be my companion. The person went to see my home and told my wife that she saw me in court. I was released because my wife went to Bombo (a local radio Station).

I could tell that there is no single part of my body that was not beaten. Until now I am still enduring the pain. Every time there was someone who came inside the room they hit and kicked me and asked if I was the bomber. I can feel the pain even up to my bones. I thought it would have been better if I died so that my family won’t have problem anymore.

Q: How long was it before Fatima saw you?

A: It was nine days before I saw Fatima. My wife went to all the military camps that she could possibly knew. They were unable to find me because they hid me (someone was overheard to have said: nobody can find him because he was held in a hotel room)

Q: Were you tortured in those nine days?

A: Yes. Every person who comes in would punch and kick me. They made me stood up and I was thinking that they will not hurt me anymore but they still hit me here (pointing his body part). They made me stood up and told me to stay put there. I wasn’t able to urinate for a week. When I was there in the barracks I asked someone if he could accompany me to the comfort room to urinate. There was blood in my urine. The (policemen) had no mercy. As if it was true that we were the ones who did the bombing.

Q: After nine days, you were brought to the court, did they sent you to a doctor for a check-up?

A: They just took me (hospital) there but I was not examined by a doctor. (Someone was heard to have said: they weren’t checked and they were just sent to the emergency hospital). Now I suffer for this even though we did not commit the crime they are accusing us. It seems like our family is also killed because of this. We were just praying to God. Because it is true we are innocent.

Q: Before you were arrested, what was your work?

Q: What is the work of a labourer?

A: Carrying sacks of goods. Anything will do. Like if you have a regular customer of vegetables. That’s the work of a labourer. Any loads that arrive and we can make money through it; we will work it just to buy food for my children for the day.

Q: How many children do you have?

A: Children? I have eight children. I really don’t know if they are still eating since I am still here inside the cell. We are poor but we are now even poorer because I am here inside the jail.

Q: The person who arrested you, what were they wearing?

A: They were wearing plain clothes.

Q: How many? Can you still remember it? How many of them? What was their vehicle?

A: The vehicle they used was a van. Colour white. That’s where they loaded me. I was thrown like a pig inside the vehicle. I hit my face to a reserve wheel of the car. I can barely see the people, like if it is far away.

Q: So there were many people in the supermarket (at the time of your arrest)?

A: Yes. There are so many people that time. There are a lot of them who saw me.

Q: Is there anyone who attempted to help you or prevented the police?

A: No one. They were too afraid because the policemen were carrying guns. I was arrested at 4:30pm. A lot of people saw me because during afternoons there are many people in the supermarket. Some were displaying their goods.

All we wanted is to be released from prison. It is so difficult to say that we will fight our case because we are just poor, where are we going to get money to fight our case? If they (policemen) have pity on us, they should help us to be released. We want to be released without any problem and fear. That no one will run after us, that we would really be declared innocent. It’s hard to be free when you have fear in you.

……………
The views shared in this interview do not necessarily reflect those of the AHRC, and the AHRC takes no responsibility for them.

« PHILIPPINES: Torture victims speak out — “They tortured me by water boarding” Interview 13