A column by Dr. Gaffar Peang-Meth published by the Asian Human Rights Commission

The French playwright Moliere said, “It is not only what we do, but also what we do not do, for which we are accountable.” Robert F. Kennedy posited: “It is from numberless diverse acts of courage and belief that human history is shaped. Each time a man stands up for an ideal, or acts to improve the lot of others, or strikes out against injustice, he sends forth a tiny ripple of hope.”

Two events that occurred in Cambodia on June 2, 2010 speak volumes about human nature and politics. On this day, Cambodian officials, non-governmental groups (minus the London-based Global witness that charged Cambodia with “gross mismanagement” of her natural resources) and foreign donors began a two-day conference to discuss the country’s most pressing issues before awarding more than one billion dollars in development aid.

On the same day, Premier Hun Sen’s executive-dominated Supreme Court upheld the lower courts’ ruling against legislator Mu Sochua, who sued Premier Sen for defamation for 500 riels (about 12 cents) for calling her “strong leg,” a “gangster/thug,” and for insinuating in an April 2009 speech in Kampot, that Sochua unbuttoned her blouse in front of an officer and then filed a complaint against him. Sochua’s lawsuit was met by Sen’s counter-lawsuit that Sochua defamed him.

In August 2009, the Phnom Penh Municipal Court dismissed Sochua’s suit for lack of evidence, and ordered her to pay 16.5 million riels (about ,975) in fines and compensation for defaming the premier. In October, the Court of Appeals upheld the Municipal Court’s ruling.

One day before the Supreme Court’s ruling, the Cambodian Centre for Human Rights issued a legal analysis, posted online, that found that Cambodia’s lower courts failed to uphold Sochua’s right to a fair trial and ignored her right to the country’s Constitution-guaranteed freedom of expression. The CCHR paper quoted Article 63 of the UNTAC Penal Code that defines defamation as “any bad faith allegation or imputation of a given fact which harms the honour or reputation of an individual,” and stated government lawyers had failed to convincingly prove that Sochua had harmed Sen’s reputation, or had done so in “bad faith”, both key elements of the law.

But, it has not been the intent or the letter of the law that matter in the Cambodia ruled by Sen and his Cambodian People’s Party. Just as Sen’s military and security forces exist to serve Sen and the CPP, so the judiciary and all national institutions exist for the same purpose. The traditional Khmer respect, obedience and loyalty to personalities in positions of authority only help Sen and those in power.

Sochua has stood her ground and has broken from tradition: She would rather go to jail than pay the fines. “I have been found guilty of a crime I have not committed,” she said. “This is not justice. This is justice for sale, and for the powerful people only.” Several dozens of her supporters joined her on June 2 on a peaceful march to the “donor conference.” But Sen’s armed riot police blocked their path.

Also one day before the conference, Global Witness called on donors to pressure the Sen government. Its campaigns director Gavin Hayman said in a statement: “The Cambodian government has been promising to reform for years but nothing has changed … Donors simply cannot continue to turn a blind eye.”

On that same day of June 1, fifteen non-governmental organizations released a briefing paper, “Cambodia Silenced: The End Days of Democracy?” calling on the international donor community to “take serious note of the deterioration of freedom of expression.” The paper states: “For over a decade the international community has provided aid to Cambodia but most have remained largely quiet as human rights have been violated and democratic space eroded.”

“Since 2009 freedom of expression has continued to be seriously undermined,” says the paper, “with the Royal Government of Cambodia crackdown targeting the pillars of democracy in Cambodia: parliamentarians; the media; lawyers; human rights activists; and ordinary citizens.”

As it asserts, “Cambodia’s democracy is in free-fall,” the paper also presented some concrete “recommendations” to donor countries. Words were spoken at the conference: Access to land, improved transparency, accountability for use of natural resources have been cited as essential for the country’s development goals. Premier Sen skilfully exercised his rhetoric saying the right things at the right time to secure international aid: His government is committed to reform, a “life-or-death issue for Cambodia.” Yet, World Bank country director Annette Dixon’s words were clear: “It is important for the government to take the lead in aligning resources to development priorities.”

As a former colleague in the Khmer resistance, who is now a member of the Hun Sen regime, told me, Sen’s and CPP’s guiding principle to keep power is that words mean nothing, so say what one wishes as this is what freedom and democracy are about, but when power is seen threatened, even United Nations country head Douglas Broderick was warned of expulsion from Cambodia if “unacceptable interference” in Cambodia’s internal affairs does not stop. This draconian approach mutes criticism.

So, while Sen’s judiciary ruled against a legislator, on June 3 donor countries pledged 1.1 billion dollars in development aid to the Sen regime, despite rights groups’ complaints of “rampant cronyism and corruption.” Last year, donors provided 951 million dollars, around half the government’s budget, despite demands by rights groups that donors get tough on government’s failure to reform.

Lessons drawn from these events are that in the world of realpolitik, national interests, what actually brings more immediate benefit to serving a country’s foreign policy goal, trump the elusive rights and freedoms of man; it takes more than words to create a more credible alternative for foreign governments to even consider replacing the devil they know with the devil they don’t know; while toothless international resolutions condemning injustices are better than none, they are not the “sticks and stones” that break bones and save such human rights icon like Sochua and others.

South Africa’s Nelson Mandela once said, “There is no easy walk to freedom anywhere, and many of us will have to pass through the valley of the shadow of death again and again before we reach the mountaintop of our desires.” 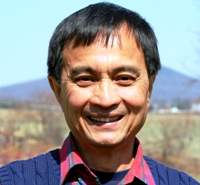 Dr. Gaffar Peang-Meth is retired from the University of Guam, where he taught political science for 13 years. He currently lives in the United States. He can be contacted at peangmeth@gmail.com .

About AHRC: The Asian Human Rights Commission is a regional non-governmental organisation monitoring and lobbying human rights issues in Asia. The Hong Kong-based group was founded in 1984.