INDONESIA: Religious minority group’s leader in Bekasi is named suspect for blocking attack directed to him

The Asian Human Rights Commission (AHRC) has received updated information regarding the case concerning the congregation of Batak Protestant Church (HKBP) Filadelfia in Bekasi. The leader of the congregation, Reverend Palti Panjaitan, has been named as a suspect by the police after he previously defended himself from an attack by local residents of Jejalen Jaya Village. Rev. Palti Panjaitan is charged with articles on light physical assault and offensive treatment under the Penal Code.

According to an interview held by the AHRC with Reverend Palti Panjaitan, Bekasi District Police named him as a suspect on 12 March 2013. The charges imposed on him were regarding physical assault as prohibited in Article 352 of the Penal Code as well as offensive treatment under Article 335 (1) of the Code. The former charge carries a maximum punishment of three months imprisonment whereas the latter may lead to maximum one year imprisonment. 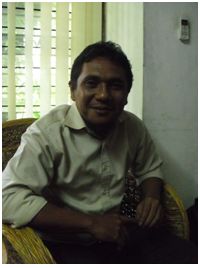 Charges imposed on Rev. Palti are related to the attack directed by local residents of Jejalen Jaya Village towards the congregation of HKBP Filadelfia on 24 December 2012. On that day at around 6pm, the congregation was marching to the location of their church to hold a Christmas Eve mass. However, at about 200 meters away from the church, their way was blocked by the local residents. The residents also threw rotten eggs, animal faeces, stones and urine at the congregation. Approximately 200 police officers were present when the attack was taking place, yet none of them took any measures to prevent it or arrest the perpetrators.

As the situation was getting worse, the congregation of HKBP Filadelfia’s decided to leave and instead went to Tambun Sub-District Police Station to hold the Christmas Eve mass there. Rev. Palti Panjaitan stayed at the location with his wife and some other members of the congregation. The local residents later surrounded the station and attempted to attack them. The police managed to block the attack from the back as well as the right and left sides. However Rev. Palti had to protect himself and his wife from an attack directed by the informal leader of the residents, Abdul Aziz. The Reverend used his hands to protect himself and his wife until the police later prevented Abdul Aziz from attacking him further. Along with the members of congregation who were still with him, the Reverend went back to the Tambun Sub-District Police Station.

Later on the same day, Abdul Aziz lodged a complaint to Bekasi Sub-District Police regarding ‘the attack’ committed by Rev. Palti Panjaitan. His complaint was promptly followed up by the police that Abdul Aziz and some members of the congregation were summoned by the police during the period of December 2012-February 2013 for questioning.

While the police responded expeditiously to the complaint lodged by Abdul Aziz, this was not the case when it came to the complaint submitted by Rev. Palti Panjaitan. As the AHRC previously reported in AHRC-UAC-087-2012, Rev. Palti Panjaitan received death threats from Abdul Aziz on 15 April 2012. The threats delivered by Aziz were recorded by an independent journalist and the video is available in Bahasa Indonesia on here. Rev. Palti Panjaitan later reported the threats to Jakarta Metropolitan Police yet his complaint was very slowly followed up by the police. Even though the threats took place in April 2012, as of today the police are still ‘conducting an investigation’ on the allegation lodged by Rev. Palti Panjaitan. The police also failed to take measures against the residents of Jejalen Jaya Village who have consistently intimidated and threatened the congregation of HKBP Filadelfia. In his interview with the AHRC in May 2012, Rev. Palti Panjaitan expressed his concern on how the Indonesian government is taking the side of the majority as it is too afraid of the intolerance groups exist in the country.

SUGGESTED ACTION:
Please write to the relevant authorities below urging them to ensure that charges against Rev. Palti Panjaitan are repealed. Please also urge them to take serious measures against individuals who have been persecuting the congregation of HKBP Filadelfia and depriving their right to the freedom to manifest their religion.

The AHRC is writing separately to the UN Special Rapporteur on Freedom of Religion or Belief and the Independent Expert on Minority Issues.

INDONESIA: Religious minority group’s leader in Bekasi is named suspect for blocking attack directed to him

I am writing to voice my deep concern regarding the naming of Reverend Palti Panjaitan as suspect by Bekasi District Police on 12 March 2013. I have been informed that Rev. Palti Panjaitan is charged with provisions on physical assault and offensive treatment under the Indonesian Penal Code for ‘beating’ the informal leader of Jejalen Jaya villagers, Abdul Aziz, on 24 December 2012. According to the information I received, Rev. Palti Panjaitan did not beat Abdul Aziz as accused but was only blocking the attack directed by Aziz against him.

I am extremely concerned with the lack of protection for religious minorities in your country. I am aware the attacks and intimidations towards HKBP Filadelfia and Rev. Palti Panjaitan on 24 December 2012 was not the first time for them and that the Christian community in Bekasi is not the only persecuted religious minorities group exist in your territory. I am disturbed with the fact that leaders of the religious minority groups are criminally charged and prosecuted with unjust, vague provisions such as blasphemy or offensive treatment merely because they were defending their rights, whilst individuals who persecute and discriminate them are left unpunished. It is a big disappointment to witness persecutions of religious minority groups are taking place in various parts of Indonesia despite the government’s commitment to attach ‘the highest priority to the issue of freedom of religion’ during the UN Universal Periodical Review (UPR) in May last year.

I am urging you to withdraw the fabricated charges imposed on Rev. Palti Panjaitan as well as to provide him with rehabilitation. Equally important, those responsible for persecuting the congregation of HKBP Filadelfia should not be tolerated that criminal proceeding against them should take place. I am calling you to provide the residents of Jejalen Jaya village with the correct understanding that HKBP Filadelfia is lawfully entitled to establish a church in the land they bought, as previously ruled by the Supreme Court.

I look forward for your positive and swift response on this matter. Thank you.

« PHILIPPINES: MPC Statement on the 45th Anniversary of the Jabidah Massacre