The Asian Human Rights Commission (AHRC) writes with deep concern regarding the death threats that one of the Abadilla Five detainees, whom we previously reported to have been suffering from kidney failure, is receiving inside the New Bilibid Prison in Muntinlupa City where he is presently detained. 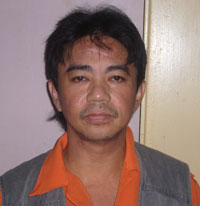 On 14 January 2009, detainee Lenido Lumanog, informed his legal counsel, lawyer Soliman Santos, that he had seen a piece of paper containing a threatening message addressed to him placed inside a box. He and his fellow inmates found the box below his dormitory which he shares with other detainees.

Soliman has yet to read the full text of the note. Lenido informed him that he has also noticed unusual movement taking place inside the dormitory. For example, the doorway leading to his cell had been kept open, which has not happen before.

As we have previously reported, Lenido’s health condition is delicate and, according to Soliman, after receiving the threats he feels more insecure than ever before inside his detention center. Apart from enduring his health condition, he has had to worry about taking measures for his security and he is clueless as to who may be making the threats.

Lenido is also worried that he may be falsely accused of committing wrongdoing to subsequently justify whatever action is taken on him–as it usually happens to detainees facing threats; or those who have been targeted for attack inside prisons. The threats on Lenido began after the renewed campaign calling for their release and to have their Petition for Certiorari promptly concluded, which sought to declare their conviction null and void, pending before the Supreme Court (SC).

The four day campaign, which lasted from January 5 to 8, resulted in renewed attention to their petition and their complaint about human rights violations.

On January 5, SC spokesperson Jose Midas Marquez said that the SC is already acting on the petition (Case No.: G.R. No. 182555) which Lenido and his colleague, Augusto Santos, have filed on 5 May 2008. However, this was stated after the prisoners’ families held a peaceful demonstration in front of the SC building (For details please read: AHRC-PRL-001-2009). Under the rules, however, the SC has its own discretion to have the petition resolved within one year from the time the petition is filed.

Meanwhile, the Commission on Human Rights (CHR) in Manila has also informed the families of the Abadilla Five, the wife of Lenido, Malou; the wife of Joel De Jesus, Cherelyn; and Augustos’ grandmother; Lolita San Felipe, that they would resume monitoring the complaint for violation of their rights the Commission has filed in 1996. It was in January 7 when the families met Commissioner Leila De Lima, chairperson of the CHR, for a dialogue where they also obtained assurance from her that she would monitor the progress of the case.

In our previous open letter to commissioner of Commission on Human Rights (AHRC-OLT-002-2009; AHRC-OLT-001-2009) the AHRC has already called upon the CHR and the Office of the Ombudsman for the Military and Other Law Enforcement Offices (MOLEO) to act on the victim’s long overdue complaint and to ensure the policemen involved are charged in court at once.

SUGGESTED ACTION:
Please write letters to the authorities below asking them to take immediate action to ensure that the threats made on Lenido Lumanog are investigated promptly; and that he should also be provided with the adequate protection he requires. Also, their Petition for Review on Certiorari pending before the Supreme Court (SC) should be concluded at once; and that their complaints for violation of right filed in court at once.

The AHRC has also written separate letter to the UN Special Rapporteur on the question of torture calling for immediate intervention in this case.

Name of victim: Lenido Lumanog, he is presently held at Dorm 1A, New Bilibid Prison, Muntinlupa City. He had also been enduring complications to his health due to the kidney failure he had been suffering.
Status of the incident: He began receiving threatening messages on 14 January 2009 written on a piece of paper placed in a box sent to his dorm where he is held. He has also been noticing unusual movements in recent days inside his dorm; for instance, the doorway leading to his detention center has been kept open.

I am writing to express my serious concern to the plight of Lenido Lumanog, an ailing prisoner and one of the Abadilla Five detainees who are presently held at the New Bilibid Prison in Muntinlupa City.

On 14 January 2009, detainee Lenido Lumanog, informed his legal counsel, lawyer Soliman Santos, that he had found a piece of paper containing a threatening message addressed to him placed inside a box. He and his fellow inmates found the box below his dormitory which he shares with other detainees.

Soliman has yet to read the full text of the note. Lenido informed him that he has also noticed unusual movement taking place inside the dormitory. For example, the doorway leading to his cell had been kept open, which has not happen before.

As you are maybe aware, Lenido’s health has since been deteriorating as he had to endure continued detention while waiting for the petition to have his conviction and his fellow prisoners from lower court reviewed by the Supreme Court (SC), concluded. The case bears Case No.: G.R. No. 182555. He, too, had to endure health complications due to kidney failure amidst inadequate medications he is getting inside the detention center.

Thus, for Lenido to once again, endure threats and to worry for his security and safety is completely unacceptable. I therefore urge you to have his concerns acted upon promptly and to have it thoroughly investigated to determine who were responsible. Lenido should also be afforded with adequate protection he requires without delay; and that security measures should also be implemented to ensure his safety and security.

Once again, I urge you to use your authority to ensure that Lenido’s Petition for Review on Certiorari pending before the SC concluded promptly. Also, the Abadilla Five’s complaints over human rights violations, to which the Commission on Human Rights (CHR) has filed in July 1996 which remains pending before the Office of the Ombudsman for the Military and Other Law Enforcement Offices (MOLEO), be also filed in court at once.

It is disappointing that for nearly 13 years, the Abadilla Five’s complaint for violations committed on them have not seen any progress in court. It is completely disappointing that the policemen involved in arresting, detaining and subsequently filing charges on them, have not been held to account for their actions. Some of these policemen have either already been able to retire from service or died.

I trust that you take concrete action in this case.

SRI LANKA: A reading of the last article, written in expectation of his death, by the assassinated journalist, the editor of the Sunday Leader, Lasantha Wickramatunga is now available online »