[NOTICE: The AHRC encourages you to send your appeal letters via fax or post to them. Fax numbers and postal addresses of the Indonesian authorities are attached below with this appeal. You may reproduce with reference in part or in full the content of this urgent appeal including photos. Thank you.]

The Asian Human Rights Commission (AHRC) is disturbed to learn from the SKP office of the Catholic Diocese in Papua that the police arrested student activist leader Mr. Buktar Tabuni on December 3, 2008 in Sentani, Jayapura, Indonesia on criminal charges of “treason”. The authorities arrested him despite the fact that he followed all requirements stipulated in the Indonesian legislation regarding freedom of expression, when organizing demonstrations.

Mr. Buktar Tabuni is a human rights activist, as well as the leader of the Student Association of the Central Highlands in Papua. On October 16, 2008, Mr. Tabuni organized a peaceful demonstration in Papua in support of the International Parliamentarians for West Papua in London. (Photo 1, 2: Protests on October 16, 2008, source: local activists) 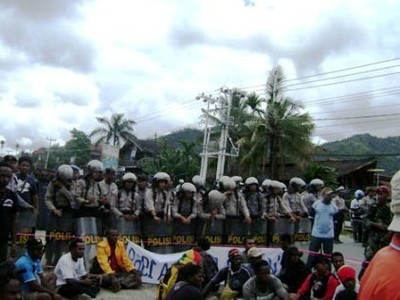 Subsequently, on December 3, 2008, the Criminal Investigation Department (CID) of the police of Papua arrested Mr. Tabuni and took him into custody. The commander in charge was Senior Adjunct Paulus Waterpauw. The arrest was carried out without a warrant. The victim has been kept in detention since the arrest and remains there until now.Mr. Tabuni conformed to the requirements of Law No. 9/1998 in Indonesia regarding freedom of expression when exercising protest action. The police charged the victim with treason under articles 106, 110, 160, 212 and 216 of the Indonesian Penal Code. The minimum penalty for this crime is seven years, and the maximum penalty is life imprisonment.

In the past, many human rights activists in Papua have been threatened, arrested, detained and even murdered by various sections of the Indonesian security forces. On October 17, 2008, the human rights activist Yosias Syet was found murdered in his home in the village of Waibron, Jayapura Regency, Papua. The perpetrators have yet to be identified in this case, but there are indicators suggesting that he was murdered for political reasons by Indonesian security forces. See AHRC-UAC-261-2008

In many past cases of detention of human rights activists in Papua, torture has been the preferred modus operandi

during interrogations and detention. There is reason to assume that Mr. Tabuni is suffering from the same treatment during his current detention.

Mr Tabuni is charged with treason under several articles. The two most frequently used articles against human rights defenders in Papua include Art. 106 and Art. 160. These read as follows:

Art. 106: “The attempt to bring the territory of the state wholly or partially under foreign domination or to separate part thereof shall be punished by life imprisonment or a maximum imprisonment of twenty years.”

Art. 160: “Any person who orally or in writing incites in public to commit a punishable act, a violent action against the public authority or any other disobedience, either to a statutory provision or to an official order issued under a statutory provision, shall be punished by a maximum imprisonment of six years”.

In August 2008 eight members of the staff of the Aceh Legal Aid Institute were sentenced to imprisonment under charges of article 160 after having distributed pamphlets that explained government involvement in land expropriations. See AHRC-UAC-197-2008

for more information on the case.

Indonesia is state party to and thus bound by the International Covenant on Civil and Political Rights which requires in its article 19.2 that “everyone shall have the right to freedom of expression; this right shall include freedom to seek, receive and impart information and ideas of all kinds, regardless of frontiers, either orally, in writing or in print, in the form of art, or through any other media of his choice.” The application of articles 106 and 160 represent a violation of these rights. (Photo 3: protests against Buktar Tabuni’s arrest and detention in front of the police station, source: local activists) 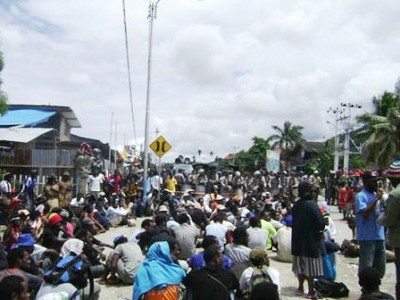 Article 106 is typically not applied with caution and prohibits through its content the full exercise of freedom of expression and related to this the inalienable right to self-determination. Article 160 is worded in vague language, which makes it susceptible to selective implementation. This is often the case in Papua, where these articles are frequently used against rights activists. This then blocks peace-building activities in the two Papuan provinces which remain under the strong grip of armed security forces.

Please write to the persons listed below urging them to stop the arbitrary arrests of human rights activists in Papua and urging the immediate release of Mr. Tabuni from custody.Also,drawing on this case, please voice your concern regarding the right to freedom of expression of indigenous Papuans, in general, and of human rights activists in particular.Please note that the AHRC has written a separate letter to the UN Special Representative on human rights defenders and freedom of opinion and expression calling for intervention in this matter.

Criminal Investigation Division of the police in Papua, under command of Senior Adjunct Paulus Waterpauw

I am appalled to learn of the arrest of Mr. Buktar Tabuni on the 3rd of December 2008 in Sentani, Jayapura, Indonesia. According to the information I have received, Mr Tabuni was arrested on charges of treason, based on articles 106, 110, 160, 212 and 216 of the Indonesian Penal Code. He was arrested by personnel from the C.I.D. of the Papuan police. No arrest warrant was presented at the time of the arrest, and Mr. Tabuni is still being held in detention.

Mr. Tabuni is an active human rights activist, and a student Association leader. He has as such organized a number of peaceful demonstrations. The most recent one was in support of the International Parliamentarians for West Papua in London, and was held on October 16, 2008.

Despite the fact that the various demonstrations organized by Mr. Tabuni had been peaceful, and in accordance with the requirements set out in Indonesian Law No. 9/1998 regarding freedom of expression, he was arrested, charged with treason, and remains in detention.

First, I ask you to ensure that Mr. Tabuni is released immediately from custody. This is urgent considering the risk of torture as commonly practiced in Papuan detention facilities.

I further urge you to drop the charges against Mr. Tabuni, as he was exercising his right to freedom of expression in accordance with Law No. 9/1998.

I want to draw attention to the need of revising the Indonesian Penal Code, especially with regards to article 106 and 160, since these are written in vague language and often applied against rights activists. A revision would reduce the high risk of arbitrary application of these laws.

Finally, I want to stress arrests such as that of Mr. Tabuni constitute a grave breach of the right to freedom of expression as enshrined in article 19 of the International Covenant on Civil and Political Rights (ICCPR). The neglect of these fundamental rights by Indonesia would represent utter disrespect of international human rights standards.

I trust that you will do what is in your power to make sure that Mr. Tabuni will be released from detention and the charges against him dropped.

Chief of the Papuan Regional Police

Director of the Criminal Unit

Minister of Justice and Human Rights

Jl. Latuharhary No. 4B Menteng

« SRI LANKA: Human rights situation is much worse than 60 years ago

ASIA: AHRC message on the 60th Anniversary is on YouTube »