Home / News / BURMA: First charges against monk who led protests and 10 others now going to court

BURMA: First charges against monk who led protests and 10 others now going to court

In the latest in the series of cases of persons involved in last September’s mass protests in Burma, the Asian Human Rights Commission (AHRC) brings you details of the first charges against one of the monks who were at the forefront of the Saffron Revolution. After being held illegally for around 10 months and having had the charges against him changed constantly, U Gambira, and 10 others among whom four are also monks, are now accused of upsetting public tranquillity and insulting religion. 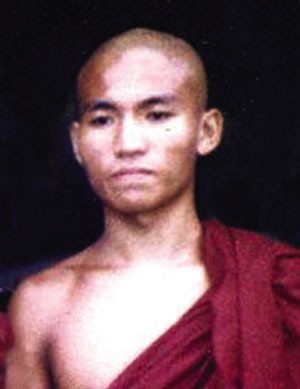 The AHRC has obtained the details of the first of 16 cases that have been lodged against U Gambira, a monk who was at the forefront of last September’s mass protests in Burma. In this case he has been charged with four other monks and six civilians with insulting religion and upsetting public tranquility.

According to the police officer who has brought the case (the same officer bringing most of the cases against people accused over last year’s protests), U Gambira and the ten others were involved in a range of activities that constitute offences, since 2006 when they began working with groups in Thailand to generate opposition to the junta inside Burma. U Gambira and eight other monks formed a union and made a call for the release of political prisoners and for dialogue towards national reconciliation, or they would declare a religious boycott of the regime.

Then in September 2007, the group established with U Gambira and a number of other groups of monks jointly called for an apology from the regime or a boycott after the army assault on monks at Pakokku that had reportedly left one monk dead. The news of the call was spread throughout all of the shortwave radio stations broadcasting into Burma. Thereafter, the boycott was started and obtained a lot of media attention.

The other ten accused are also variously charged with being involved in the protests and boycott and with having had contact with the overseas media and using the Internet to post information.

The charges against the 11 are groundless because the accusations against them do not correspond with the elements of the offences under which they have been charged. Furthermore, the police officer lodging the case has apparently not relied upon the advice of a law officer before lodging the charges in court, as he is required to do, but has just made the case himself; however, the judge has accepted the case, which includes confessions presented to the court illegally. The policeman also has lodged a total of 16 separate cases against U Gambira, even though they all relate to the same incidents and repeatedly consist of the same charges.

In addition to the above, all of the accused were illegally detained and held without charge until the case was brought into a court in August 2008. U Gambira had been detained starting from the previous November, and thus was in illegal detention for 10 months.

Similarly, it has been following the growing number of arrests and legal actions taken against persons who have launched their own cyclone relief operations since May. See on the arrest of human rights defender U Myint Aye and two others: AHRC-UAC-183-2008.

For links and other material on the protests in Burma of August and September 2007 see: http://campaigns.ahrchk.net/burmaprotests/

Please write to the persons listed below to call for the charges against U Gambira and the 10 others to be dropped. Please note that for the purpose of the letter, the country should be referred to by its official title of Myanmar, rather than Burma.

Please be informed that the AHRC is writing a separate letter to the UN Special Rapporteurs on Myanmar and independence of judges and lawyers as well as human rights defenders, the UN Working Group on arbitrary detention and the regional human rights office for Southeast Asia, calling for interventions into this case.

MYANMAR: 5 monks and 6 others illegally held and charged over 2007 rallies

I am writing to draw to your attention the many flaws in a case lodged against five monks and six civilians in Myanmar (as above) and to call for the charges against them to be dropped.

According to the information that I have been given, the 11 have been accused over the incidents in Myanmar of last September 2007 when they participated in peaceful rallies and communicated with the overseas media. The charges against them, however, are that they upset public tranquility and insulted religion.

With regards to these charges, according to what I have been informed they are groundless because the elements of these offences are lacking from the contents of the police accusations and evidence presented against them.

However, this is by no means the only problem with this case. In addition, I am informed that the accused were illegally detained for lengthy periods before being brought to trial, in violation of the Criminal Procedure Code (CrPC), that no one can be detained for more than 24 hours without being brought before a judge (section 61). U Gambira, for instance, was detained in Mandalay on 4 November 2007 but the case lodged against him was not brought into court until 18 August 2008. Thus the period of his illegal detention was around 288 days.

Furthermore, the police officer lodging the case has apparently not followed the requirements of Directive No. 1/2001 (section 7) and obtained the advice of Law Officer before lodging the charges in court, which also invalidates the case and should have obliged the judge to disqualify the application.

The policeman also has lodged a total of 16 separate cases against U Gambira, even though they all relate to the same incidents and repeatedly consist of the same charges, which means that they should be combined rather than lodged separately (CrPC section 234[1]), and is relying upon confessions obtained during interrogations not taken in the presence of a judge, which also violates the Evidence Act (sections 24-26). In the event that U Gambira is found guilty under multiple charges over single offences, it will not be legal to impose a penalty against him for any more than one of these (Penal Code, section 71).

These are just some of the glaring violations of law and basic human rights in this case. In view of them, and their consequences on any trial, which cannot possibly be free or fair, I urge that the court close the case and release the accused immediately. In the event that the court itself fails to do so I urge the Attorney General to take the necessary steps to see the case withdrawn from court (Attorney General Law 2001, section 4[b]) and the Supreme Court of Myanmar to give directions to this effect in accordance with its powers as established by the new Constitution of Myanmar 2008.

I likewise call for the Minister of Home Affairs and Director General of Police to look into this case both with a view to seeing the case withdrawn and also in order to review the work of their subordinates.

Finally, I take this opportunity to remind the Government of Myanmar of the need to allow the International Committee of the Red Cross access to places of detention and not least of all, access to those persons and forcibly disrobed monks and nuns who have been held in violation of criminal procedure and without charge or trial since the events of last September.