The Asian Human Rights Commission (AHRC) has received information about five activists in Burma who have been imprisoned for attending a gathering and meeting with American embassy staff around the time of anti-government protests last September. Apart from not following the laws of evidence in making the case against the five, the police told the court that they arrested the five in 2008 whereas in fact they were taken into custody a year before and held in illegal detention for all that time. 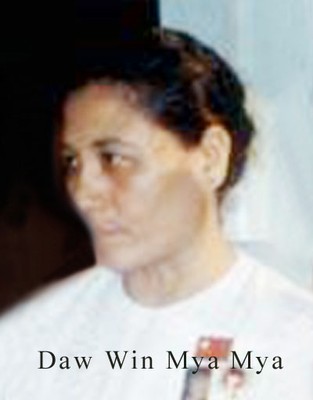 Daw Win Mya Mya and four other members of the National League for Democracy (NLD) in Mandalay, Upper Burma, were on 24 October 2008 all imprisoned for two to 13 years for attending a party gathering and meeting with American embassy officials. (see Min Thu’s photo and U Than Lwin’s photo)

According to the police, all five of the accused attended a gathering with 69 other members in Mandalay in September 2007 where there were anti-government speeches. Furthermore, according to the police, Daw Win Mya Mya, U Kan Htun and U Than Lwin met American embassy officials on three dates in 2006 and 2007 when they gave information and news that was intended to upset the public tranquillity.

However, when the police brought the case to the court, they could not give any evidence that the accused persons had spoken at the gathering or in fact done anything at all there. Furthermore, they could not give proper evidence of the speeches that had been given: although they gave a 46-page transcript, they could not present the cassettes that the transcript was supposedly taken from, which according to the law in Burma means that the transcript also is invalid. The police also presented “confessions” from the accused which is likewise against the law as they were not taken down in front of a judge.

Above all, the police blatantly lied to the court that they had only arrested the five accused on 15 August 2008, a week before the case was lodged in the court, when in fact they illegally detained them all since between 20 September and 6 October 2007, at the time of the mass monk-led protests against the military regime. Thus they were all wrongfully imprisoned for almost a year before the cases against them were brought to court. According to the defence lawyer, he presented these facts to the court with proof, including records that the relatives of the detainees had visited them in jail throughout this time. Nonetheless the judge ignored all this in giving her guilty verdicts.

The sentences against the accused are also vastly excessive for this type of crime, running to 13 years for one and 12 for two others, because the police issued four separate cases with the same charges on basically the same types of offences rather than rolling them into single cases as established for under the ordinary criminal procedure. In fact each of the charges against Win Mya Mya and Than Lwin should on conviction have come to a maximum two-year jail term, so four years for each. But instead they received 12 and 8 years each because of this artificial multiplying of offences.

U Than Lwin was previously attacked and imprisoned and his family members also imprisoned. While in jail he failed to obtain proper medical treatment and went blind in one eye due to the injuries caused by his assault. See further: AHRC-OLT-003-2008 and UP-138-2007.

Please write to the persons listed below to call for the prompt release of Daw Win Mya Mya and her four colleagues. Please note that for the purpose of the letter, the country should be referred to by its official title of Myanmar, rather than Burma.

Please be informed that the AHRC is writing a separate letter to the UN Special Rapporteurs on Myanmar and independence of judges and lawyers as well as human rights defenders, the UN Working Group on arbitrary detention and the regional human rights office for Southeast Asia, calling for interventions into this case.

I am writing to you today to voice my disbelief at the jail terms handed out to the abovementioned five members of the National League for Democracy (NLD) in Mandalay Division of Upper Myanmar for attending a party event and allegedly also meeting with United States Embassy officials.

According to the information that I have received, police maintain that the five attended a gathering of 74 NLD members in Chanmyaytharsan, Mandalay on 7 September 2007 where they heard speeches that the government’s “7-point road map” would not result in democracy and otherwise that the police have stated amounted to speeches intended to upset the public tranquillity. Furthermore, according to the police, Daw Win Mya Mya and U Kan Htun met a US Embassy official in Mandalay on 22 June 2006 and gave him information concerning the travels of the Industry (1) Minister, U Aung Thaung; on 21 August 2006 the two of them and U Than Lwin allegedly met another official and gave a variety of information about the harassment of NLD members in Mandalay; and on 7 August 2007 they met two other officials and this time gave information on the visit of U Aung Thaung to Mettaya town and other news, all of which were acts that were aimed at upsetting public tranquillity, and all but the last at inciting enmity among the people.

I have been informed that the cases against these five people are so utterly flawed as to render them completely invalid and unjust. The following are just a few of the most glaring errors that have been brought to my attention.

1. The police lied to the court that they had arrested the five accused on 15 August 2008, when in fact they were illegally detained since 2007. Specifically, Daw Win Mya Mya was taken into custody on 20 September 2007, U Tin Ko Ko and Ko Min Thu on 25 September 2007, and U Than Lwin and U Kan Htun on 2 and 6 October 2007. Thus they were all illegally imprisoned for almost a year before the cases against them were brought to court. The defence lawyer presented these facts to the court with evidence (such as prison visit records of the accused persons’ relatives) but the judge ignored them to convict the accused.

2. The police presented no evidence that any of the accused actually said anything at the assembly on September 7, let alone that it would violate the Penal Code, only that they attended it. Furthermore, as they only have a recording and documents of the meeting they have nothing to show of the accused persons’ presence or roles there.

3. The police claim that they made recordings of the assembly on September 7 and of other meetings but in court the investigating officer, Police Captain Win Myint, said that they had not retained the cassettes on which the recordings had been made and had only copies of typed transcripts, which is what they submitted to the court. This is a violation of the Evidence Act (sections 62-67) which makes clear that the cassettes had to be submitted to the court as primary evidence with the transcripts as secondary evidence. The transcripts cannot be submitted by themselves.

4. The supposed confessions of the accused that were extracted from them during interrogation were also submitted to court also in violation of the Evidence Act (sections 26, 159). I can only assume that given other features of this case, notably the one-year illegal detention, these confessions were obtained through torture or inhuman treatment.

5. Four separate cases were lodged against the accused even though as the charges and features are the same they should have been combined into a single case against each (Criminal Procedure Code, section 234[1]). As to this, I can only assume that the purpose of lodging separate cases was to extend the maximum possible sentences imposed against each accused rather than applying the law.

Given the numerous flaws in the case that led to this conviction, I urge the Supreme Court of Myanmar to give directions to have the five accused promptly released in accordance with its powers as established by the new Constitution of Myanmar 2008.

Finally, I take this opportunity to remind the Government of Myanmar of the need to allow the International Committee of the Red Cross access to places of detention and to ascertain the humanitarian and especially, the health needs, of all detainees including the five persons in this case.

« PAKISTAN: A father and a son are missing after arrest

PAKISTAN: Government must crack down hard on its Jirga courts and the extra-judicial murders they commit »