BURMA: A woman harassed and jailed for making complaints against local officials

The Asian Human Rights Commission (AHRC) has received detailed information on the case of a woman in lower Burma who has been jailed for over one year for allegedly swearing at some local officials. The reason for the case against the accused, Ma Sandar, is that she had previously made complaints against these officials. The case against her was groundless, and the AHRC is appealing for her prompt release. 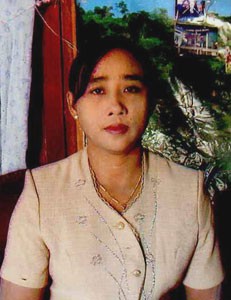 In August a court in lower Burma sentenced 38-year-old Ma Sanda to one year and one month in prison with hard labour for allegedly swearing at government officers and for obstructing them in their work. However, the officials appear to have concocted the case against her out of revenge for complaints that she had previously made against them.

According to the officials, a policeman and a local council chairman, on 18 January 2008 they had stopped two teenage boys whom they had seen carrying a car battery, to ask them where they got it (car batteries are commonly used to power lights and small appliances in Burma, where electricity supply is unreliable). They said that they had bought it from Ma Sandar, and the policeman sent one of the boys to fetch her and check, rather than going to her on his motorcycle. As Ma Sandar was not well the policeman had to summon for her a second time under threat of arrest if she didnt appear, and according to him after she came she yelled and swore at him that whether or not she had sold the battery to someone was none of his business. After that, she was charged with obscenity and with using force to prevent a government servant from doing his duty. She was kept in custody up to and during the trial.

When the case came to court, it was obvious that it was full of errors and confused evidence. First, the two boys who had reportedly been carrying the battery that started the whole thing were not brought as witnesses. Second, the people who did testify, including the police officer, the council official and another person who had supposedly been patrolling with them gave conflicting accounts of how they met each other and what they had seen happen. Third, nobody gave any testimony that would amount to an offence of using force to prevent a government servant from doing his duty, so the only charge that could possibly have been argued was that Ma Sandar swore at the policeman.

Despite all this, the court found Ma Sandar guilty of both charges and sentenced her to 13 months in jail. This is even though another person brought into the same court on the same charge of obstructing a public servant (by threatening police with a stick) was let off with a fine only two months before.

Ma Sandar has been transferred to a jail in upper Burma, far from her family and friends, where in September it was reported that she is being kept in solitary confinement and is in poor health.

According to people familiar with the case, the two officials targetted Ma Sandar and set her up because she had previously lodged verbal and written complaints against them for wrongdoing and corruption, and they wanted to get revenge. In December 2007, they had already raided her house to look for illegal materials but had found nothing.

Please write to the persons listed below to call for Ma Sandar to be promptly released. Please note that for the purpose of the letter, the country should be referred to by its official title of Myanmar, rather than Burma.

Please be informed that the AHRC is writing a separate letter to the UN Special Rapporteurs on Myanmar and independence of judges and lawyers as well as the UN Special Representative on human rights defenders, the UN Working Group on arbitrary detention and the regional human rights office for Southeast Asia, calling for interventions into this case.

MYANMAR: Woman jailed for over one year for allegedly swearing at official

I am writing to you today to appeal for the prompt release from imprisonment of one Ma Sandar, whom, I am informed, has been wrongly charged and jailed because of vindictive police and local council officials.

Ma Sandar has been imprisoned because Police Corporal Soe Win Aung and Kyundaw Ward Chairman U San Kyi claim that she had criminally obstructed them from performing their duties and swore at them on the morning of 18 January 2008. According to the officials, they had stopped two teenage boys whom they had seen carrying a car battery at the end of Kyundaw Ward 8th Street outside of Choe Choe Pyone’s shop, to ask them where they got it. The boys, identified as Htun Min Latt and Kyi Aung, said that they had purchased it from Ma Sandar, whom the policeman then ordered to come to the scene whereupon she allegedly committed the two offences, and after which she was charged and denied bail.

What arose during the trial of the accused reveals that there is no basis for the charges to have been made against her, and certainly not for the court to have convicted her, for the following reasons:

1. It was in the first place beyond the authority of the policeman to summon Ma Sandar under threat of arrest if she failed to appear. She had not committed any offence and he was seeking her assistance to confirm the claim of the two boys that they had legally bought the battery. He should have left them with the other officials and gone to confirm the fact promptly by motorcycle rather than call her to where he was located, which was unauthorised.

2. Neither of the two teenage boys who were supposedly found carrying the battery was brought as a witness to the trial against Ma Sandar, casting doubt over the account of their involvement in the case. On the basis of this failure to bring two key witnesses alone the case should have been dismissed.

3. There were many contradictions and inconsistencies in the accounts of the other witnesses. For instance, in his original report the policeman said that at 9am he had gone with U San Kyi and Bo Bo Hein, a local resident, to patrol the vicinity of 8th Street, but in his testimony he said that he had gone alone and met the two there. U San Kyi said the he had been on security duties in the ward by himself when he met with Police Corporal Soe Win Aung and a boy aged around 12 or 13 at the end of 8th Street, and for his part Bo Bo Hein said that he had been at home at 9am and had seen the policeman with the two boys whereupon he had gone out from the house. Even the beginning facts of the case and the supposed suspicion that had been cast over the two boys were so confused and inconsistent that the case should have been stopped before it was started.

4. None of the witnesses gave any testimony that would support a charge of using criminal force to obstruct a public officer. The only charge that could have been entertained at all was that of obscenity.

Notwithstanding, I regret to observe that on 26 August 2008 the trial judge convicted Ma Sandar on both counts and sentenced her to one-year imprisonment for the alleged use of criminal force and one month for obscenity. Thereafter she was transferred to the Myinchan Prison in upper Burma, which is far from her family and friends, where her health is said to be worsening and she has reportedly been kept in solitary confinement.

It has also been brought to my attention that in June 2008, just a short time before this case was decided, the Twante Township Court deciding on another case under section 353 let off the accused with a fine, even though he had threatened police with a stick and blocked their entrance to premises where illegal gambling was allegedly going on. The vast gap between the mild sentence in that case and the harsh one in this, in which there were no elements of the charge and no evidence presented against the accused, further indicates that Ma Sandar has not been treated fairly for reasons that had nothing to do with the details of the case as brought to the attention of the court.

Specifically, I am aware that Police Corporal Soe Win Aung and U San Kyi both had cause to want to get revenge against Ma Sandar for complaints that she had previously made against them, in accordance with government policy to encourage citizens to report on wrongdoing by local officials. In the case of the policeman, she had complained to the township police chief of his subordinate harassing another woman in public but had reportedly been told to stop interfering in police work. In the case of the ward chairman, she had been one of 41 signatories who sent a letter to high government officials alleging that he has been illegally collecting money from local people, and had sent other letters on her own. As a result, these officials had already targeted Ma Sandar, and at 3am on 23 December 2007 had raided her house with an illegally prepared search warrant, signed by the Twente Township Police station chief, Superintendent Htun Htun Oo, rather than by a township judge. Nonetheless they had failed to find anything and evidently bade their time until they could manufacture the absurd charges against her in this case.

Given the numerous flaws in the case that led to this conviction, I urge the Supreme Court of Myanmar to give directions to have Ma Sandar promptly released in accordance with its powers as established by the new Constitution of Myanmar 2008.

I likewise call for the Attorney General to review the case and the work of the concerned law office as per section 4(b) of the Attorney General Law 2001, and for the Minister of Home Affairs and Director General of Police also to look into the matter and in particular, the allegations of wrongdoing against the two officials responsible for the case brought against Ma Sandar.

Finally, I take this opportunity to remind the Government of Myanmar of the need to allow the International Committee of the Red Cross access to places of detention and to ascertain the humanitarian and especially, the health needs, of all detainees including Ma Sandar.

SRI LANKA: The government and the state media is silent about the murder of the complainant in a bribery and a torture case »