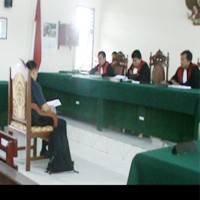 The Minahasa district police in North Sulawesi charged Stanly Handry Ering, the whistleblower in a corruption case, with defamation. Ph E A Tuerah, Rector of the University of Negeri Manado (UNIMA) reported Stanly to the Minahasa district police for defaming him as an alleged corrupt person. Rector Tuerah and his subordinates tried to threaten the victim and intimidated students to give fake testimony in order that charges could be laid against the victim. Rector Tuerah also set up a team to abduct and harm the victim. The Minahasa district police and Tondano district office of public prosecutor ignored the rights Mr. Ering is entitled to as an informant in a corruption case and pressed criminal charges against him. Mr. Ering complained to the North Sulawesi regional police but was requested to pay bribes to be released on bail. Several irregularities in the case point at a serious obstruction of justice. The AHRC is also concerned about the security of the victim.  (photo: Stanly Handry Ering, lecturer at the Manado State University appearing before court. source: courtesy of Pacific TV Manado)

According to reports from KontraS, the Commission for the Disappeared and Victims of Violence, On 24 February 2011, Stanly Handry Ering, a lecturer at the State University of Manado (Universitas Negeri Manado – UNIMA) in Tondano, North Sulawesi reported allegations of corruption at this university involving the university’s rector to the Indonesian Corruption Eradication Commission (KPK).

Following this, Rector Tuerah made defamation allegations based on article 311 and 316 of the criminal code to the Minahasa police district regarding the Mr. Ering’s report to the KPK. According to article 10 of law no. 13/2006 concerning the witness and victim protection and as provided in the circular of Indonesia police No: B/345/III/2005/bareskrim a witness or whistleblower cannot be legally charged with a crime for the information he or she provided in a case. In such cases corruption crimes thus take precedence over counter-crimes according to Indonesian legal standards.

On 9 March 2011, the Minahasa district police called Mr. Ering as a witness regarding the defamation allegations against him. Mr. Ering reminded the police that being an informant in a corruption case, he cannot be charged with defamation. However, the police investigators, Raindra Ramadhan Syah and James Rama ignored Mr. Ering’s statement. Moreover, police investigators explained to Mr. Ering that based on the opinion of the head of Minahasa police district, chief of criminal investigation unit, and the public prosecutor the police will charge him with defamation even in the absence of any direct evidence. Moreover, Mr. Ering was also concerned about the repeated informal meetings the police had with Rector Tuerah, and visits by the head of Minahasa police district to the Rector.

On 15 March 2011, Mr. Ering received an acknowledgement of and support for his procedural’s rights from the witness and victim protection agency (LPSK). Despite this, on 16 March 2011, the police called Mr. Ering as the suspect of the defamation crime. The police investigator charged Mr. Ering with defamation and justified this step with a new statement given by Mr. Benali Jacob, one of the victim’s students justifies. According to Mr. Jacob, lecturer Ering had asked him to copy and publish the corruption allegations and requested the students to demonstrate. Mr. Ering denied this statement.

On 18 March 2011, the assistant of the first dean of the faculty of mathematics and science of the university told the Mr. Ering that Mr. Bernali Jacob made a confession in front of him and other students. Bernali would have declared that he gave false testimony, because Rector Tuerah threatened to block his graduation from the university if he did not give a false statement to the police to press for charges against Mr. Ering.

On 4 April 2011, the Mr. Ering received information from a security guard, who works at the university, that there would be a team to kidnap and harm him. The team had already tried to abduct and harm the victim, but failed.

The witness and victim protection agency (LPSK) sent a letter to the head of the Minahasa district police, Wirdenis Herman in order to remind the police of the procedural rights Mr. Ering is entitled to as a whistleblower as mentioned in the law on witness and victim protection. However, Mr. Wirdenis neglected this request and proceeded with the criminal process against Mr. Ering. On 18 April 2011, the Mr. Ering reported Mr. Wirdenis Herman and the police investigators to the internal affairs division (division for profession and security – PROPAM) of the North Sulawesi regional police for violating his rights. However, the North Sulawesi regional police so far has not taken any action in this case.

In April 2011, the witness and victim protection agency also gave a letter to the public prosecutor of the Tondano district regarding the case. The prosecutor neglected it and responded by adding charges based on article 335 of criminal code concerning objectionable acts. The prosecutor provided no reason for the unexpected addition of criminal charges. On 10 May 2011, the Minahasa district police requested Mr. Ering, who was on bail, to report to their office and he and his case were then formally transferred to the prosecutor. At the Tondano district office of the public prosecutor the head of the office’s intelligence section, Mr. Alfons Tilaar explained to Mr. Ering that even though the public prosecutor sees no legal basis for his detention he will have to proceed since the attorney general supports Rector Tuerah’s complaint and demanded the detention. Mr. Erings request to be released again on bail was received by the public prosecutor but Mr. Alfons requested a bribe of 25,000,000 Indonesian Rupiah (almost 3,000 USD, several months’ income) before releasing him. The victim refused to pay the bribes for the release he was legally entitled to.

Mr. Ering received a letter from the public prosecutor Lily V.V. Muaja unusually dated 29 May 2011, a Sunday, on 30 May 2011. In the letter he was requested to appear before the Tondano District Court on 1 June 2011. When Mr. Ering tried to confirm the court date on the following day, 31 May 2011, with the court, the court responded that there was no such letter sent to him and the he is in fact expected to report to the court on 9 June 2011. Mr. Ering received a letter from the court with the corrected date on the same day. Public Prosecutor Muaja later confessed to Mr. Ering that the false letter was prepared following a telephone request they received.

On 9 June 2011 the indictment against Mr. Ering was served in court. Concerns about the security of Mr. Ering remain.

SUGGESTED ACTION:
Please write letters to the authorities listed below urging them to drop the illegal charges against Mr. Ering, the LPSK to provide security measures for Mr. Ering, an investigation into the procedural violations at the Minahasa District Police and the Tondano district office of public prosecutor and for the KPK to investigate possible corruption taking place in the Minahasa District Police and Tondano Disctrict Office of the public prosecutor.

Please be informed that the AHRC is sending letters on this case to Special Rapporteur on the promotion and protection of the right to freedom of opinion and expression, calling for strong interventions

I am writing to express my serious concern over the charges against Stanly Handry Ering, the informant of the corruption allegedly carried out by the Rector of the University of Negeri Manado (UNIMA).

I know that on 9 March 2011, Minahasa district police called Mr. Ering as witness at defamation conviction as mentioned in article 311 and 316 criminal code. The reporter of the defamation conviction is the rector of UNIMA, Ph E A Tuerah regarding the Mr. Ering’s report to KPK on 24 February 2011. Mr. Ering has submitted his rights that a witness of crimes cannot be charged because of his information, as mentioned in article 10 law number 13 of 2006 concerning the witness and victim protection and the circular of Indonesia police concerning the priority of corruption crime compared to the counter-crime. However, the statement was ignored by Raindra Ramadhan Syah and James Rama, the police investigators. The police investigators also stated that the victim will be considered as the suspect, not because of the legal facts but rather the opinion of the head of Minahasa police district, chief of criminal investigation unit, and the public prosecutor. Moreover, the victim has repeatedly seen the police meet with the rector of UNIMA informally.

I am also informed that Mr. Ering received the protection as the witness by the witness and victim protection agency (LPSK) on 15 March 2011. However, on 16 March 2011, Mr. Ering was called by the police as the suspect of the defamation crime. The police investigator stated that the reason to determinated Mr.Ering as the suspect was because of information from Benali Jacob, one of his students, which stated that the victim asked him to copy and published the corruption information and ordered the students to demonstrate. The victim rejected the statement.

On 18 March 2011, the assistant of the first dean of the mathematics and science faculty of UNIMA told the victim that Bernali Jacob confessed in the front of him and other students. Bernali stated that he gave false statements, because the rector of UNIMA threatenedd him that he will be never finish his studies if he did not give the false statement to charge Mr. Ering at Minahasa police district.

On 4 April 2011, the victim received information from one of the guards at UNIMA that there was a team to kidnap and harm the victim. The team has already tried on one occasion but failed.

The witness and victim protection agency (LPSK) met with the head of the Minahasa district police and Tondano district public prosecutor and instructed them to give the procedural rights to the victim as the informant as mentioned in law on witness and victim protection. However, there has been no action regarding this request. The division on profession and security of North Sulawesi regional police also did not take any action regarding this case.

I am concerned with the adding of article 335 of criminal code concerning crimes against personal liberty without any reason by the public prosecutor. On 10 May 2011, the case files were transferred to the prosecutor. At Tondano district office of public prosecutor, the victim met Alfons Tilaar, the head of intelligent section. Alfons also asked 25.000.000 rupiah for the victim’s request of postponement of detention.

Based on article 10 (1) law number 13/2006 concerning the witness and victim protection and also the circular of Indonesian police, i urge you to ensure that:

1. The illegal charges against Mr. Ering must be dropped;
2. The LPSK must provide security measures from Mr. Ering;
3. The procedural violations at the Minahasa district police and Tondano district office of public prosecutor must be investigated;
4. The KPK must investigate possible corruption taking place in the Minahasa district police and Tondano disctrict office of the public prosecutor.

« PHILIPPINES: No investigation to complaint of torture filed one and a half years ago

PHILIPPINES: Torture victims speak out–” Everybody says torture is wrong, but it is commonly used” Interview 8  »