The Asian Human Rights Commission (AHRC) has received information regarding the attack directed by an Islamic fundamentalist group, Islam Defenders Front (Front Pembela Islam, FPI) towards an Ahmadiyah mosque in Singaparna, Tasikmalaya, West Java. The attack took place on Friday, 20 April 2012. The police was present at the time of the attack yet it did not take any action to prevent or stop the attacks directed towards the mosque. As of the time of writing, the police have not named anyone as suspects.

According to information AHRC obtained from a witness, Doni Sutriana, at around 8 in the morning two police Mass Control (Pengendalian Masyarakat, Dalmas) trucks arrived in the location where the Baitul Rahim mosque is located. One platoon of police was deployed to Baitul Rahim mosque. On the previous day, there was news received from the police, the village officers as well as the religious affairs office that the FPI would come to the mosque. The FPI said it wanted to come to the mosque to put a banner which reads that the local villagers refuse the presence of Ahmadiyah in their area. 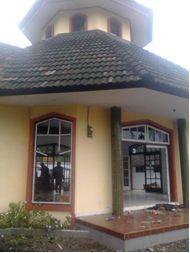 Not long after the FPI managed to place the banner, approximately 150 people came and some of them were carrying sticks. In front of the Baitul Rahim mosque, the leader of the group delivered a speech saying that, according to the Joint Decree of the Minister of Religious Affair, the Attorney General and the Indonesian Home Minister No. 3 Year 2008 as well as the Governor’s Regulation No. 12 year 2011, the mosque should be closed down. These two regulations were based on the view that Ahmadiyah is a deviant form of Islam that it is considered as religious blasphemy. Religious blasphemy itself is a crime and prohibited by Law No. 1/PnPs/1965 which was later adopted in Article 156a of the Penal Code.

Under the Law No. 2 Year 2002 regarding the Indonesian National Police, one of the main duties of the police is to provide protection to any members of society. Article 14 paragraph (1) point i of the law specifically establishes that the police is obliged to protect life, properties, the society and the environment from any kind of attacks or disruptions. In exercising such duty, the police have to respect human rights principles, one of which is the prohibition of discrimination. The Chief of the Indonesian National Police’s Regulation No. 8 Year 2009 emphasises this by stating in one of its articles that ‘in accordance with the principle of respect for human rights, every INP member in discharging his/her duties or in the course of their daily lives must protect and respect human rights, or at least… act justly and non-discriminatory’.

However, this obligation is rarely fulfilled by the police when it comes to cases regarding attacks towards the Ahmadiyah communities in Indonesia. A local NGO, Lembaga Studi dan Advokasi Masyarakat (Institute for Policy Research and Advocacy, ELSAM) reported that Ahmadiyah is the most persecuted religious groups in Indonesia. In 2011, 54% of freedom of religion cases in Indonesia is concerning the Ahmadiyah. The full report in English can be downloaded in here. Despite this fact, those who committed violence against the Ahmadiyah is hardly punished proportionately. Twelve people who beat three Ahmadiyah members to death last year were only sentenced to less than a year imprisonment. In other cases, the perpetrators just simply got off scot-free.

SUGGESTED ACTION:
Please write to the listed authorities below urging them to ensure the perpetrators to be brought to justice. Independent, impartial and effective investigation has to be conducted and the punishment imposed to the perpetrators should reflect the severity of the crimes they committed. Please also urge the relevant authorities to repeal any law and policies which are discriminatory towards religious minority groups. It is also essential to ensure that the police and other law enforcement officials have to protect every individual within Indonesia territory and jurisdiction without any discrimination.

I am writing to voice my deep concern regarding the attack towards the Ahmadiyah mosque named Baitul Rahim in Singaparna, Tasikmalaya, West Java. I was informed that the attack was allegedly performed by the Islamic Defenders Front (Front Pembela Islam, FPI) on Friday, 20 April 2012. I am disturbed to learn that, before and during the attack, the police was present at the location yet did not take any adequate measures to prevent the attack. According to one of the witnesses, the police and other state officials were aware about the plan of FPI to come to the mosque a day before and they even informed the villagers about this. I was also told that at around 8 in the morning of 20 April 2012, one platoon of police was deployed to the mosque.

I was informed that, initially, the FPI’s intention in visiting the mosque was to put a banner which reads that the local residents reject the presence of Ahmadiyah as well as its activities in their area. The leader of the group came to Baitul Rahim mosque also delivered a speech which basically asserted that the mosque should be closed down, in accordance with the 2008 Joint Regulation of the Indonesian Minister of Religious Affair, the Attorney General and the Indonesian Home Minister as well as the West Java Governor’s Regulation concerning the prohibition of Ahmadiyah’s religious activities. Soon after he ordered the group to make sure that the mosque had been sealed, the members of FPI started smashing the windows of the mosque. The leader’s persuasion not to commit any violence was simply ignored and the members of the group kept destroying the lamp, water tab and the TV aerial of the mosque. Three Molotov bombs were also thrown into the mosque which started a fire. The police were present during the attack yet they did not take any measures until the mosque had been severely damaged.

I am aware that, under the Law No. 2 Year 2002 concerning the Indonesian National Police as well as the Chief of the Indonesian National Police No. 8 Year 2009, the police in Indonesia are obliged to ensure and protect the safety of every individual within the Indonesia territory and jurisdiction. I have also learned that, in so doing, the police have to respect the non-discrimination principle. I am therefore concerned with the fact that, in this case, the police have failed to protect the security of Ahmadiyah group in Singaparna by not taking adequate measures to prevent and stop the attacks directed by FPI against the Ahmadiyah’s Baitul Rahim mosque.

I would also like to emphasise that the 1945 Constitution guarantees the right of anyone, without exception, to freedom of religion. Bearing in mind that Indonesia is a state party to the International Covenant on Civil and Political Rights (ICCPR), the interpretation of such right should be in accordance with the international human rights standard. The term ‘religion’ under such right should be understood in a broad sense. In General Comment No. 22, the UN Human Rights Committee upholds that the term ‘religion’ does not refer only to traditional religions or religions with institutional characteristics or practice analogous to those of traditional religions. The Committee, therefore, ‘views with concern any tendency to discriminate against any religion or belief for any reason, including the fact that they are newly established, or represent religious minorities that may be the subject of hostility on the part of a predominant religious community.’ Based on such interpretation concerning freedom of religion, I believe the 2008 Joint Decree and West Java Governor Regulation No. 12 Year 2011 which prohibit any religious activities of the Ahmadiyah members are in violation of the right to freedom of religion.

For these reasons, I am urging you to take all the necessary measures to ensure those who are responsible for the attack towards the Baitul Rahim mosque are proportionately punished. The police and other relevant institutions who conduct investigation and examination on this case have to be impartial and do not have any prejudice against the Ahmadiyah which may undermine the settlement of the case. I am also urging you to ensure that all discriminatory laws, policies and practices are repealed and eliminated to stop Indonesia from breaching its human rights obligations and its own constitution.

Your swift and effective response on this matter is requested.