The Asian Human Rights Commission (AHRC) has received information regarding the closure of three mosques belong to the Ahmadi community in Cianjur, West Java. It was reported that the closure was performed by hundreds of members of non-tolerant groups with the consent of local authorities. One of the mosques was vandalized by a member of one of the groups yet no legal action was taken against him. 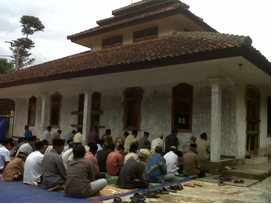 A member of the Ahmadi Indonesia Congregation (JAI) in Cianjur named Firmansyah informed the AHRC that at around 1.30pm on 12 April 2013, a short text message was sent around by the chairman of a non-tolerant group called GEMPA calling for public participation in the closure of Ahmadi mosques on that day. About 30 minutes later, approximately 300 people from the villages of Sukadana and Wangun Jaya as well as members of Islam Defenders Front (Front Pembela Islam, FPI) gathered at an Ahmadi mosque located in Neglasari called Baitun Nasir, demanding the banning of religious activities by the Ahmadis. Most of them were riding motorbikes while some others were driving cars, one of which belongs to the Head of Sukadana Village, Karmawan.

(Picture: Ahmadi congregation praying in front of the mosque after they had it closed down by local authorities and non-tolerant groups. Courtesy of Firmansyah, JAI).

It was reported that at 4pm around 25 people on motorbikes arrived at another Ahmadi mosque, Al Ghofur, located in Ciparay. One of them, identified as Yana bin Honi, threw stones at the mosque and the door and windows were damaged. Not long afterwards, the crowd that gathered in Neglasari joined Yana and the other 24 people who arrived earlier. They created a human shield and blocked the way that leads to the mosque. One of them was orating, “we are demanding the Governor to meet his promise to ban the deviant teachings of Ahmadi… we are going to guard the closure of the Ahmadi mosques”. Police and military officers as well as several government officials were seen amongst the crowd, including the Head of Campaka Sub-District, Akos Koswara; the Head of Cianjur District Police’s Intelligence Unit, Landjar Kuntjoro; and the Chief of Campaka Sub-District Police, Toha Ma’rup. The Head of Public Relations of Campaka Sub-District Police, Dedi Supriyadi, was also present and put a handwritten sign in front of the mosque stating:

Shortly after the sign was put up, wooden boards were nailed to the doors of the mosque, preventing anybody from getting in. At this stage, the crowd comprised of around 500 people, who later made their move back to Baitun Nasir mosque in Neglasari.

As what happened in Al Ghofur mosque, wooden boards were nailed by members of non-tolerant groups on the doors of Baitun Nasir. Several representatives of the Ahmadi congregation were attempting to hold a dialogue with the government and law enforcement officials yet the later insisted that if the closure was not taking place then the crowd would destroy the mosque. An Ahmadi was trying to record the conversation taking place between the Ahmadi representatives and the officials yet he was prohibited from doing so.

At around 6pm on the same day, the crowd arrived in the third mosque of Ahmadi, Al Mahmud, located in Cicakra. They instantly nailed wooden boards on the mosque doors as they did to two other mosques. A member of the Ahmadi congregation was demanding for an official document ordering the closure of the mosque yet he was told that the closure was ‘a task given by God’.

Persecution is nothing new for the Ahmadis in Indonesia. Attacks on and closure of their mosques by non-tolerant groups and the local authorities as well as physical assaults against their members took place in various part of Indonesia, including those in Batam, Singaparna, and recently in Bekasi. A local NGO, ELSAM, noted in 2012 that the Ahmadi is the most persecuted religious group in the country.

Despite the widespread persecution and discrimination, no significant measures had been taken by the authorities to address such problem. Those who involved in such abuses are hardly brought to trial and –in very limited cases- were sentenced to very lenient punishment. A member of FPI who was responsible for the vandalisation of an Ahmadi mosque in Bandung last year was sentenced only to 3,5 month imprisonment whilst some other members of FPI who murdered three Ahmadis in 2011 were sent to three to six month imprisonment.

Instead of taking action to end the persecution and discrimination against the Ahmadi, the Indonesian authorities tend to encourage such abuses by issuing bylaws prohibiting the activities of the minority group. The issuance of such bylaws is a result of the enactment of a Joint Ministerial Decree signed by the Attorney General, the Minister of Interior as well as the Minister of Religious Affairs in 2008. Calls to repeal the decree have been repeatedly addressed to the Indonesian government by human rights groups and international community, including during the UN UPR session on Indonesia last year. Yet the government refused to accept the recommendation on revising or withdrawing the decree, contradicting its own promise to ‘address such cases of intolerance amongst religions and ensure followers, such as Ahmadis, were able to practice their faith and believe in a good manner’.

Indonesia has a law on anti-discrimination yet is applicable only for cases concerning racial and ethnic discrimination, not the religious one. Under the current available laws, religious discriminatory motive in committing crimes is not treated as an aggravating factor.

Please write to the listed authorities below, demanding them to take following actions:
1. President and the Human Rights General Director – to order the withdrawal of Joint Ministerial Decree and other regulations banning the activities of the Ahmadi;
2. Chief of the Indonesian National Police and the Chief of West Java Regional Police – to order their subordinates to take legal action against any individuals who persecute and discriminate minorities. Please also urge them to make sure that members of the police do not involve in such persecution and discrimination;
3. Attorney General, Minister of Interior and Minister of Religious Affairs – to withdraw the Joint Ministerial Decree banning the activities of the Ahmadi, issued in 2008;
4. Governor of West Java and the Regent of Cianjur – to repeal any bylaws prohibiting the activities of the Ahmadi;
5. Chairman of National Human Rights Commission – to conduct an investigation on the allegation of human rights violations in this case as well as to urge the relevant authorities to take all necessary steps aiming at the end of persecution and discrimination against the Ahmadi and other minorities.

The AHRC is writing separately to the UN Special Rapporteur on Freedom of Religion or Belief as well as the UN Independent Expert on Minority Issues.

I am writing to voice my deep concern regarding the closure of three Ahmadi mosques in Cianjur, West Java by local authorities who collaborated with non-tolerant groups. I was informed that, on 12 April 2013 between 1-6pm, hundreds of members of non-tolerant groups named Gempa, Islam Defenders Front (Front Pembela Islam, FPI) as well as Sukadana’s Alliance on Anti-Ahmadi (Aliansi Masyarakat Sukadana Anti-Ahmadiyah) marched to three Ahmadi mosques located in Ciparay, Neglasari and Cicakra and closed them down. One of the mosques was stoned by a member of the non-tolerant group that the door and the windows of it were damaged.

I am extremely concerned with the widespread persecution and discrimination against the Ahmadi in Indonesia and how insignificant measures had been taken by the government to address the situation. Despite the promise of the government in the UPR session last year that it will ‘address such cases of intolerance amongst religions and ensure followers, such as Ahmadis, were able to practice their faith and believe in a good manner’, discriminatory regulations such as the Joint Ministerial Decree prohibiting the activities of the Ahmadi remains to be effective and those who discriminate them are left unpunished. I am aware that there have been isolated cases in which individual who vandalised an Ahmadi mosque in Bandung and those who murdered three Ahmadis were tried and punished. However, the sentences handed down on them were imprisonment for a period of only less than one year – very lenient and do not reflect the gravity of the abuse perpetrated.

I wish to reiterate that as a state which claims to be committed to the protection of human rights, Indonesia should not merely accommodate the demands and interest of majority groups but also those of the minorities. This is in accordance with the international legal obligations to which Indonesia are bound to as a result of the country’s ratification to the International Covenant on Civil and Political Rights (ICCPR) in 2005.

Considering these above, I am calling you to ensure the revision or withdrawal of Joint Ministerial Decree and other regulations prohibiting the activities of the Ahmadi. As for what has happened in this particular case, I am urging you to investigate the allegation on discrimination and persecution against the Ahmadi congregation in Cianjur and to take legal measures against individuals involved in such abuses, including those who are members of the police as well as government officials. The order to close down the mosques should be repealed and the affected Ahmadi congregation should be able to hold their religious activities without any intervention from any party.

I look forward for your swift and adequate response in this matter.

« PAKISTAN: Why is General Kiyani dictating Islamic ideology as the basis of the country?

SRI LANKA: Ushering in a new era of purified judiciary?  »