The Asian Human Rights Commission (AHRC) has received information about charges brought against a community educator in Burma for teaching political science. Min Min, a human rights defender based in the country’s lowland, is being prosecuted because he refused to heed warnings that he not teaches a course on political science at his community education centre. He is currently on bail with the trial underway.

On 27 January 2013 community educator in the central Burma town of Pyi, Min Min, together with a number of colleagues opened a political science training programme as part of a range of courses his Olive Branch capacity building centre offers to local people at little or no cost.

The course attracted the attention of some officials who still have the mindset of military government. On the same day, the district administration sent a letter to the subordinate township administration to order that the persons responsible for opening the political science course without permission be prosecuted. 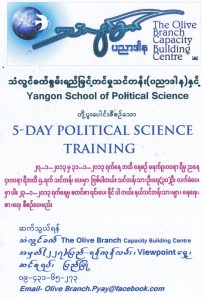 The next day, January 28, the local administration twice called Min Min and warned him to shut down the programme, but he refused, saying that he believed that the programme is legal and that it is consistent with the objectives of the government and people at a time of democratisation to teach political science. Min Min explained that political science is a necessary topic to develop the country, and he was not teaching a course about how to overthrow governments or grab power. The township officials said that they understood but that they were under orders from the district. Min Min adds that the district head is a former army officer who still thinks like a soldier in matters of this sort.

The day after that, January 29, the local administration opened a case against Min Min. The court charged him with failure to comply with the order of the administration to stop the programme. However, the specific charge does not fit the alleged crime, since it is framed to deal with cases of absconders from summonses or similar orders.

The case against Min Min is ongoing, and he has been released on bail. The AHRC is concerned that although officials at the township level were seemingly not much interested to take action about the political science course, under pressure from above they will be forced to convict him, irrespective of the facts of the case. Therefore, the AHRC is calling for public pressure to see the case closed before it reaches the point of a verdict.

For additional details, please see the sample letter below.

Min Min was previously imprisoned for giving “illegal tuition” to youth in Pyay about human rights issues (UP-108-2007). Following his release, he continued to work as a human rights defender and soon set up the Olive Branch capacity building centre for community education, with the aim of building knowledge among local people so that they can defend their own rights.

The Olive Branch centre, which is largely funded out of contributions from participants and the local community, and is supported by voluntarily given classes from expert trainers, holds courses on constitutionalism, human rights, environmental science, management, leadership skills, the United Nations system, international organizations, journalism, international law and domestic law, as well as political science. It has a Facebook page at: https://www.facebook.com/olivebranch.pyay.

For all appeals and other interventions by the AHRC on Burma, please visit the country page on our website: http://www.humanrights.asia/countries/burma.

Please write a letter to the following government authorities to urge that the case against Min Min be dropped. Please note that for the purpose of the letter Burma is referred to by its official name, Myanmar, and Pyi and Pyay.

Please also be informed that the AHRC is writing separate letters to the UN Special Rapporteurs on human rights in Myanmar, on the right to education, on freedom of opinion and expression, and on human rights defenders; and, to the regional office in Bangkok, calling for their interventions into this matter.

I am writing to express my concern, and confusion, that a community educator hitherto imprisoned for teaching about human rights has again been charged with an offence, this time for alleged unauthorised teaching of political science.

According to the information I have received, the district administration of Pyay, in central Myanmar, on 27 January 2013 sent a letter to the Khetta Township administration head on the matter of “Permission to open political science instruction not granted” [Letter No. 5/95-1/Oo 6(0311)]. Under this heading, it refers to the community educator, Min Min, derisively as a “so-called human rights activist” whom together with his colleagues the administration department had been notified had on that date opened a political science class. The letter states unequivocally that as no permission to open a course on political science had been granted, those persons responsible for the course ought to be prosecuted.

Thereafter, on the morning and the evening of January 28 the township administration called Min Min and notified him that as he was teaching political science without a permit he was to close the programme until he sought authorization [Letter No. 5/3-3/Oo 6(209)]. On January 29, as Min Min refused to comply the administration opened a case in the township court [Letter No. 5/3-3/Oo 6(211)].

It is clear from the tone of the letter from the superior department that the local administrators were already left with little option but to prosecute. This impression is reinforced by remarks from Min Min himself, that he had explained to township officials that political science is an important topic for a democratizing and developing country, and he was not teaching people how to overthrow the government or seize power; however, that the officials told him that although they understood, they were under orders from the district office.

The township court immediately opened a case against Min Min under section 172 of the Penal Code. Yet, the charge itself does not correspond with the supposed crime, since its intention is to deal with cases of persons who abscond from summonses or similar orders, whereas Min Min made no such attempt to abscond and merely continued giving instruction in a manner that he legitimately believed to be legal and consistent with his country’s democratic transition, and in accordance with the public statements of government leaders, including former military officers now occupying civilian positions.

The case against Min Min is ongoing, and he has been released on bail. Nonetheless, the whole set of circumstances is totally unsatisfactory and from a human rights perspective, completely unjustified. For one thing, I am informed that the Olive Branch centre established by Min Min has as its noble aim the building knowledge among local people so that they can defend their own rights. This aim strikes me as consistent with the stated aspirations of the current government of Myanmar to encourage democratisation, and so it is confusing as to why local officials would want to penalize someone engaged in such work. Furthermore, it comes at no cost to the government, since the centre is largely funded out of contributions from participants and the local community, and is supported by voluntary contributions of time and knowledge by expert trainers.

For another, I also note that in addition to teaching on political science, the centre holds courses on constitutionalism, human rights, environmental science, management, leadership skills, the United Nations system, international organizations, journalism, international law and domestic law. Hitherto, the centre taught political science as a unit together with other subjects, and attracted no attention or difficulties. Only when advertised as a separate subject did it attract the interest of the district administration.

Finally, I am very much concerned that under pressure from the district administration, both the township administration and the township court–which in Myanmar remains functionally a part of the administrative structure, not an independent institution–will be pushed to convict the accused without regards to facts or commonsense. Consequently, I ask that the case brought against Min Min be withdrawn through the intervention of higher authorities, before the court reaches a verdict.

I look forward to your earliest intervention in this case.

« INDONESIA: Victim of torture and fabrication of charges in Surabaya is left without reparation

PAKISTAN: The government bans secular and nationalist groups to appease the fundamentalist and Taliban groups »