The Asian Human Rights Commission (AHRC) has received information regarding the demolition of a church in Bekasi by the local authorities. The authorities claimed the demolition was performed as the church does not hold the necessary construction permit required by law. The permit was actually ‘being processed’ by the relevant authorities after the church submitted a request to obtain it in 2011. 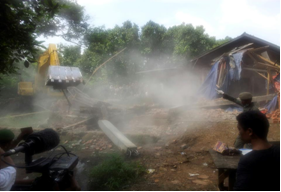 According to an interview of the AHRC with Reverend Adven Nababan from Batak Protestant Church (HKBP) Setu, he and his congregation were gathering in their half-constructed church building in Bekasi on 21 March 2013 at 8 am. They gathered after receiving verbal information on the day before that their church would be demolished by the authorities of Bekasi. At around 9 am, members of two intolerant groups, the Islam Defenders Front (Front Pembela Islam, FPI) and the Islamic People’s Forum (Forum Umat Islam, FUI) blocked the main road that leads to the church in an attempt to stop the members of congregation from entering. Two hours later approximately at 11 am, members of the groups started marching to the church. (Picture: Excavator demolishes the church, courtesy of HKBP Setu)

The leaders of HKBP Setu were negotiating with the Chief of Setu Sub-District Police, Head of Satpol PP, Head of the Village and Head of the Sub-District for about two hours requesting them not to demolish the church. The negotiation was about to result in an agreement in favour of HKBP Setu and the congregation but members of the groups kept putting pressure on the Chief of Setu Sub-District Police as well as the Head of Satpol PP. At 2 pm, Satpol PP officers started demolishing the building using the excavator.

Whilst it is undisputable that the laws consider buildings without construction permit is illegal, it is important to be highlighted that demolition should not be the sanction imposed on illegal buildings that are under-construction. According to Article 115 (1) of Government Regulation No. 36 Year 2005 on Premises -which has more authoritative weight than a local regulation- such building should only have its construction process postponed until such permit is obtained. In addition to it, it is worth to be taken into consideration that starting constructing a building while waiting for its permit to be granted is a common practice Indonesia, due to the bad bureaucracy and overly long application process for such permit. This is also the case with HKBP Setu as it applied for a construction permit in 2011 but it has not received any response from the relevant authorities on whether their application has been accepted as of today. Therefore, it is an absurd argument for Bekasi authorities to invoke lack of permit as the reason why HKBP Setu was demolished as the absence of permit in this case was caused by the failure in their end to response promptly to the congregation’s permit application.

There has been strong suspicion that the demolition was conducted at the request from the non-tolerant groups in Bekasi, which was reaffirmed by the presence of FPI and FUI during the demolition on 21 March 2013 and the intimidation they imposed on the authorities officials on that day. In addition to it, such intolerant groups are involved in other cases concerning the deprivation of freedom of religion in Bekasi. A mosque belongs to the Ahmadi in Jatibening, for instance, was closed down by Bekasi authorities on 8 March 2013, allegedly because the FPI is going to establish a branch office in that area. The FPI and FUI were also participating in preventing the congregation of HKBP Filadelfia to hold religious activities on a piece of land in Jejalen Jaya village they have lawfully bought.

SUGGESTED ACTION:
Please write to the listed authorities below urging them to investigate the arbitrary decision of Bekasi Regent to demolish the half-finished church belongs to the congregation of HKBP Setu. Please also call the authorities to take legal steps against members of the intolerant groups who involve in the persecution of religious minorities and to provide appropriate rehabilitation for HKBP Setu’s congregation.

The AHRC is writing separately to the UN Special Rapporteur on Freedom of Religion or Belief and the Independent Expert on Minority Issues.

I am writing to voice my deep concern regarding the demolition of a church by the authorities of Bekasi on 21 March 2013. I strongly believe the demolition is a violation to the right to freedom of religion guaranteed by the 1945 Constitution.

I have been informed that Bekasi Public Order Agency (Satpol PP) demolished an unfinished church belongs to the congregation of Batak Protestant Church (HKBP) Setu at around 2 pm on 21 March 2013. The plan was verbally informed to the congregation a day prior to the demolition took place. The authorities of Bekasi claimed that the church was demolished as the congregation does not hold any construction permit required under Bekasi Local Regulation No. 7 Year 1996.

I understand that buildings without construction permit are considered to be illegal under Indonesian laws. However, I am also aware that demolition should not be the measure imposed on illegal building which is still at its construction stage. Instead, as stipulated under Government Regulation No. 36 Year 2005 on Premises, such building should only have its construction process postponed until the owner obtains the construction permit. I wish to emphasise that, in this case, the congregation of HKBP Setu already submitted an application for such permit in 2011 yet the process has been pending since then as the Bekasi authorities have not informed whether their application has been granted.

Based on these as well as the fact that it is a common practice in Indonesia to start constructing a premise while the construction permit is being processed, I doubt that lack of such permit was the genuine reason as to why the authorities of Bekasi demolished the church belongs to HKBP Setu. Instead, I strongly suspect that it was carried out by the authorities to accommodate the request from intolerant groups thus nurturing religious intolerance in the area. I was informed that members of intolerant groups, Islam Defenders Front (Front Pembela Islam, FPI) and Islamic People’s Forum (Forum Umat Islam, FUI) were present during the demolition and they even blocked the main road to the church in an attempt to stop the congregation from coming. My suspicion is also reaffirmed by the fact that such intolerant groups have been involved in the persecution and discrimination against other religious minority groups in Bekasi. I am aware that the FPI, for instance, contributed in the closing down of an Ahmadi mosque in Jati Bening earlier this month as well as in the intimidation towards the congregation of HKBP Filadelfia in Jejalen Jaya village in the last few years.

I am deeply disappointed to learn how the policy and action of the Indonesian government often only accommodate the interest of a particular group while neglect some others who are in vulnerable position such as the religious minorities. I have observed that the Indonesian government has not taken any serious legal measures against the members of intolerant groups who were responsible for the persecution and discrimination of minorities – including the killings of individuals belong to religious minority groups and the destruction of their place of worship. Instead, in some instances criminal prosecution is carried out against the leaders of these minority groups. I am saddened that what has been happening in reality does not in any way reflect the commitment to protect religious freedom as enshrined in the Constitution and expressed by the government in international forums.

Given this, I am urging you investigate the arbitrary decision of Bekasi Regent to demolish the church belongs to HKBP Setu. In so doing, human rights principles guaranteed by the 1945 Constitution as well as international treaties ratified by the government should be taken into consideration. I am also calling you to provide rehabilitation for the congregation of HKBP Setu by granting them the construction permit they requested and allowed them to establish a church on the land they have lawfully acquired. Any individuals who are responsible for the persecution and discrimination of HKBP Setu’s congregation and other religious minority groups should be held criminally responsible and punished with a proportionate punishment.

I look forward for your positive and swift action in this matter.

PAKISTAN: An Indian prisoner was tortured to death, the authorities trying to cover up the case with natural death »