Home / News / INDONESIA: Police use excessive force during a peaceful protest in South Sumatera resulting in the severe injury of an environmental activist and others

INDONESIA: Police use excessive force during a peaceful protest in South Sumatera resulting in the severe injury of an environmental activist and others

The Asian Human Rights Commission (AHRC) has received information regarding the excessive use of force by the police in response to a peaceful protest held by environmental activists and farmers in Palembang, South Sumatera on 29 January 2013. The protesters were demanding that the Chief of South Sumatera Regional Police remove the police officer who was responsible for the death of civilians in July 2012. As a result of the violence used by the police to disperse the protest, an environmental activist was severely injured and suffered a head wound. He was arrested along with 25 other activists and farmers.

According to the information received from the Commission for the Disappeared and the Victims of Violence (KontraS) and South Sumatera office of Indonesian Forum for the Environment (Wahana Lingkungan Hidup Indonesia, WALHI Sumatera Selatan), the protest started at 1 pm on 29 January 2013 and was attended by around 500 people. Those people were representing various organisations including WALHI South Sumatera office and Sriwijaya Farmers Union of Banyuasin Regency. The protesters were marching to the South Sumatera Regional Police station, which is located about 200 metres from the meeting point. 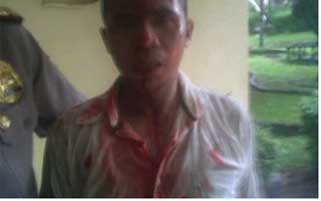 At around 4.30 the police started taking measures to disperse the protesters. Violence was used by the police despite the fact that the protest was peaceful and the most ‘violent’ thing they had done was to push against the police station’s gate until it was broken. Without any warning, the police seized the Executive Director of WALHI, Anwar Sadat, and started beating him with fists and truncheons until his head was injured and bleeding. It is reported that at least 25 other activists and farmers were also beaten and arrested by the police. At the time of writing, local activists are still gathering full information on the arrested persons and injuries they suffered. The latest information received by the AHRC reveals that at least seven protesters suffered bruising to their bodies; two others received head wounds and two others were injured.

Anwar Sadat is currently receiving medical treatment for his injury and has had six stitches in his head.

The protest on 29 January 2013 was a continuance of the protest held by the activist one day before. The main demands of the protesters were for the Chief of South Sumatera Regional Police to remove AKBP Denni Dharmapala, the Chief of Ogan Ilir Sub-District police, from his office. The protesters believe that the Ogan Ilir Police Chief was responsible for the bloodshed which took place on 27 July 2012 where a clash between the police and farmers led to the death of 13 year old boy Angga bin Dharmawan; the amputation of the right hand of Rusman, a local villager; and the firing of live ammunition towards civilians. In the peaceful protest, the activists and farmers were also questioning the arbitrary arrest of Suardi bin Damiri, a villager of Betung Village, on 25 January 2013. Another demand posed by the protesters was for the military and police not to be involved in the land dispute between the local community and companies.

SUGGESTED ACTION:
Please write to the listed authorities below asking for their intervention on this case. An independent and transparent inquiry on the excessive use of force by the police should take place and those who are responsible for the violence should be criminally held accountable.

Please note that the AHRC is writing a separate letter with regard to this matter to the UN Special Rapporteur on the Promotion and Protection of the Right to Freedom of Opinion and Expression as well as the UN Special Representative of the Secretary-General on the Situation of Human Rights Defenders.

INDONESIA: Police use excessive force during a peaceful protest in South Sumatera resulting in the severe injury of an environmental activist and others

I am writing to voice my deep concern regarding the excessive use of force performed by officers from the South Sumatera Regional Police (Polda Sumatera Selatan) towards activists and farmers who held a peaceful protest in Palembang on 29 January 2013. I have received the information from local activists that approximately 500 people were gathering in front of the South Sumatera Police station on the aforementioned date, demanding that the Chief of the Regional Police remove the Chief of Ogan Ilir Sub-District Police station from his office.

I was told that the protest was conducted peacefully by the activists and farmers and that the most ‘violent’ thing they had done was to push against the police station’s gate until it was broken. The measures taken by the police to disperse such peaceful protest, however, were unnecessary and excessive in that Anwar Sadat, the Executive Director of an environmental organisation called WALHI Sumatera Selatan who was involved in the protest, received severely head injuries. He is currently undergoing medical treatment and has received six stitches in his head. I have also been informed that 25 other activists and farmers engaged in the protest were also beaten and arrested by the police. The latest information received by the AHRC reveals that at least seven protesters suffered bruising to their bodies; two others received head wounds and two others were injured.

I wish to highlight that under the principle of freedom of expression, protests should not be dispersed by the authorities unless such activities pose threats to the rights or reputations of others, national security, public order, public health or public morals. I am of the view that the protesters in this case did not pose a threat to any of these issues and that the dispersal of the protest alone is actually in violation of freedom of expression guaranteed under the 1945 Constitution and international human rights instruments to which Indonesia is a state party, let alone the excessive use of force performed by the police.

Given the above, I am calling you to ensure that an independent and transparent inquiry into this matter takes place. Those who are responsible for the injuries to the protesters should be held criminally accountable and the victims granted adequate compensation. The protesters who are being charged and detained should be able to access their basic rights and the investigation into their case should be objective and free from any interference.

I look forward for your adequate and positive response in this case.

PAKISTAN: Endangered life and livelihood of indigenous fisherfolk in the Khyber Pakhtunkhwa province »