Home / News / BURMA: Activist due to be sentenced over alleged bombing plot

BURMA: Activist due to be sentenced over alleged bombing plot 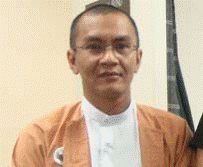 The Asian Human Rights Commission (AHRC) has been closely following the case of democracy activist Kyaw Zaw Lwin, whom the military regime in Burma has accused of involvement in a bombing plot. Authorities at the airport arrested him in September 2009 and he has been tried for a number of offences but none have any connection to the plot and none have any validity. He has also allegedly been tortured and held in a dog pen. The verdict is expected tomorrow, 27 January.

As has been widely reported in the media, Kyaw Zaw Lwin (a.k.a. Nyi Nyi Aung), a former student activist from Burma who has settled in the United States, was arrested as he arrived at Rangoon airport on 3 September 2009 to visit his ailing, jailed mother.

Military intelligence and Special Branch police reportedly took Kyaw Zaw Lwin to one interrogation centre after the next and then finally to the central prison, where according to a relative who visited him, he has been kept in a dog pen. According to his US-based lawyer he was also assaulted and denied food and sleep during interrogation.

On 24 September the state media claimed that Kyaw Zaw Lwin was involved in a bombing plotwhich in Burma is as good as announcing his conviction even before a trial has begun. Three charges were laid against him on three different dates: for allegedly lying to immigration personnel, for a foreign currency offence and for allegedly having a fake identity card. However none of them relate in any way to the contents of the media reports. Like other politically-motivated cases in recent times the case was heard in a closed court, from October 2009 to January 2010.

The AHRC has studied documentation on the case and has found that the charges against Kyaw Zaw Lwin are invalid for a number of reasons.

1. The charge concerning the identity card is invalid because–as the police officer prosecuting the case admitted in courtthe detainee did not produce the card at the airport and the police do not have any other record of him using the card; without intent the charge cannot be made.

2. The charge concerning foreign exchange is invalid because Kyaw Zaw Lwin was taken away by military intelligence even before he could make any declaration to customs. The next day the intelligence personnel came to customs, took the forms and returned them as completed. This process is completely illegal.

3. The third charge is also invalid since it can only apply to residents of Burma, of which Kyaw Zaw Lwin is not one.

Notwithstanding these, the district court handling the case has proceeded with the trial, the outcome of which will have been determined by persons not sitting in the court. The court is expected to give the verdict and sentence of those persons on 27 January.

Kyaw Zaw Lwin fled Burma after the 1988 uprising and later settled in the United States, where he took citizenship. His mother, Daw San San Tint, is currently serving a five-year sentence in Meikhtila Prison, Mandalay, for allegedly having had contact with activist groups abroad. She is suffering from cancer.

Despite his activist background and the imprisonment of his family members, Kyaw Zaw Lwin had reportedly been able to travel on his American passport to Burma a number of times since 2005. The state media reports alleged that it was during these trips that he met with activists and became involved in the alleged terrorist plot.

In recent years many activists have been accused in concocted terrorist plot cases, including U Myint Aye, the founder of local group Human Rights Defenders and Promoters (UAU-018-2009). Like Kyaw Zaw Lwin, Myint Aye was ‘convicted’ in the state media before he was ever tried in court.

Myint Aye and his two co-defendants also allege serious torture of the sort alleged in Kyaw Zaw Lwin’s case. In addition to the accounts of torture documented in Urgent Appeals, the AHRC highlighted the prevalence of torture in Burma in a recent open letter (OLT-001-2010) and also in recent statements (STM-220-2009; STM-199-2009). For more information on the situation in Burma, see the 2009 AHRC report, reports in bi-monthly journal article 2 at http://www.article2.org/countrydisplay.php (search for ‘Burma’) and the AHRC Burmese-language blog.

Please write to the persons listed below to call for the release of Kyaw Zaw Lwin. Please note that for the purpose of the letter, the country should be referred to by its official title of Myanmar, rather than Burma, and Rangoon, Yangon.

The AHRC is writing a separate letter to the UN Special Rapporteurs on Myanmar, on human rights defenders, and on torture; to the UN Working Group on Arbitrary Detention and to the regional human rights office for Southeast Asia, calling for interventions into this case.

Re: MYANMAR: Illegal detention, baseless charges and alleged torture of US citizen

I am writing to express my concern over the arrest, imprisonment, trial and alleged torture in Myanmar of Kyaw Zaw Lwin, an American citizen.

According to information that I have received, Special Branch and military intelligence officers arrested Kyaw Zaw Lwin after he disembarked a flight from Bangkok on 3 September 2009. They took him to various interrogation centres and later to the Insein Central Prison. On 24 September the state media carried reports accusing him of involvement in a terrorist plot.

On 14 October hearings opened against him in Mingalardon Township Court in the first of the three cases, Judge U Than Lwin presiding, and on 30 October the case was transferred to the district court after the second case was opened, on the complaint of the airport customs investigation unit. The third case was only opened on 29 December on complaint from the Botahtaung Township office of national registration. None of the cases relate explicitly to the contents of the earlier news reports.

I am informed that the charges against the accused are invalid for the following reasons:

1. Under section 468 of the Penal Code, read with section 463, there must be intent to commit forgery for the purpose of cheating. However, Police Captain Than Soe admitted in court on 5 January 2010 that the accused at no time produced the supposedly forged card and nor do the police have any record of his having used a forged card or of any intent to use one, so there is no act or intent to act upon which to lay this charge.

2. The foreign exchange charge is baseless because personnel of Military Affairs Security (MAS) intercepted and took away Kyaw Zaw Lwin even before he had given any declaration forms to customs. The next day, 4 September, MAS personnel came to take forms from the concerned office and then returned them, completed, to airport customs. This completely illegal procedure was openly admitted in court by the fifth prosecution witness, U Khin Maung Cho, Assistant Director, Customs Department.

3. The charge under the rules for residents is also without any validity, as per section 33, because Kyaw Zaw Lwin is an American citizen and resident, and so these rules do not apply to him.

Furthermore, the case was heard inside a special closed court in the central jail, which I note is in violation of the Judiciary Act 2000, section 2(e), as there is no law that permits trials to be conducted in this manner in Myanmar.

In light of all the above failures of law I urge that irrespective of the outcome of the trial the concerned authorities take immediate and necessary steps to release Kyaw Zaw Lwin.

In addition to the above failures of the case against the accused, I am aware that his lawyer in the United States, Beth Schwanke, has previously notified the UN Special Rapporteur on Torture of the alleged torture of her client while in custody. According to her, he has been assaulted and denied food and sleep. He has also allegedly been held in dog pens; this is a form of incarceration that other former detainees have also at times reported in which the detainee is kept in a tiny space adjacent to dog pens. All these allegations of torture and degrading treatment are credible and consistent with those of other detainees.

In this respect I take this opportunity to remind the Government of Myanmar of the need to allow the International Committee of the Red Cross access to places of detention as a matter of the utmost urgency. I can see no reason as to why the government has failed to agree to the ICRC mission in accordance with the terms of its international mandate and has for the last few years refused it access. The only conclusion that can be drawn from looking at the case of Kyaw Zaw Win is that the authorities in Myanmar are intent upon using the sentences passed through courts as a means to pursue other forms of extraordinary cruel and inhuman treatment in prisons and other places of custody. The persistent refusal to accommodate the ICRC and allow it access to detainees like Kyaw Zaw Win is one of the reasons that Myanmar’s international reputation remains among the worst in the world, and it will continue to be that way until the Government of Myanmar changes its position on this matter.

« INDIA: Rule of law is a phantom limb in India’s northeast

INDIA: The state of the republic is showcased in Manipur  »