Home / News / ASIA: The death of a colleague, Jijo Paul

ASIA: The death of a colleague, Jijo Paul 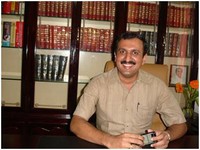 (Hong Kong, December 22, 2011) The Asian Human Rights Commission (AHRC) sadly learned of the death of Mr. Jijo Paul of Kerala, India who has been a close associate and an active promoter of human rights. He was the Chairperson of Nervazhi, our partner organization in Kerala. In this capacity Mr. Paul worked diligently towards the elimination of torture and the democratization of policing in India.

He attended the launching meetings of the Asian Alliance Against Torture & Ill-treatment and was committed to the promotion of its objectives.

He was a strong advocate and a gentle person.

He died on December 20 and his funeral will take place today, December 22 at his home in Kochi.

The Asian Human Rights Commission salutes him for his contribution towards a better society, and sends condolences to his family.