(Hong Kong, August 2, 2012) The Asian Human Rights Commission (AHRC) has sent a delegate today to observe the court trial of Temogen “Cocoy” Tulawie, a human rights defender who is presently detained and prosecuted on evidence obtained through torture and a forced confession. 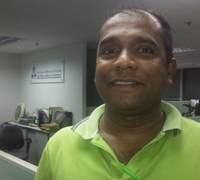 Rasika Sanjeewa Weerawickrama, a human rights lawyer from Sri Lanka, will sit as an international observer during the arraignment of Tulawie tomorrow, August 3 at 8:30am at the Regional Trial Court (RTC), Branch 11, in Davao City.

“I will observe to see what went wrong,” Mr. Sanjeewa said. He further asks,“ why in his case has it happened?” This situation occurs, despite strong provision in the country’s 1987 Constitution, which protects persons from being prosecuted on evidence taken by way of torture and forced confessions.

Tulawie will be arraigned for multiple frustrated murders and multiple attempted murders and for allegedly ‘masterminding’ and ‘plotting’ a bomb attack on May 13, 2009 to assassinate Abdusakur Tan, present governor of Sulu.

RTC judge Virginia Hofilena- Europa ordered the charges on him to be withdrawn on July 23. This was about 17 days after the AHRC issued an appeal exposing the failure of the court to promptly resolve the petition that Tulawie first filed three years ago.

Mr. Sanjeewa also asks why, despite the country’s Speedy Trial Act of 1998, that Tulawie’s petition to drop the charges on him was not resolved for three years. If the petition drags on for three years, how could the court possibly complete a proper trial of “(180) days from the first day of trial” as required by law?

In concluding Tulawie’s appeal, Judge Europa ordered that he be arraigned on murder charges. This effectively allows for prosecution of the victim, despite knowing full well that the evidence held by the prosecution and the filing procedure had been questionable.

“It was obvious that the procedure has not been fair to Tulawie. The idea is for me to observe, to get first-hand information, to know and to understand why this has happened?  If necessary, I will speak to the prosecutors myself, “Mr. Sanjeewa said.

Mr. Sanjeewa, holds a degree of Master of Law in Human Rights (LLM-HR) 2002 from the University of Hong Kong. He has had years of experience practicing law, representing poor victims pursuing complaints of torture, illegal arrest and detention, in courts in Sri Lanka. He is presently a legal consultant for the AHRC.

« NEPAL: Torture of an 18-year-old student by the police in Jhapa district

SRI LANKA: Will the Bar Association seriously defend the survival of the legal profession and judicial independence  »