(Hong Kong, July 17, 2012) Five months after a prosecutor dismissed the fabricated murder charges on 72 activists for lack of “probable cause,” one of them spoke to the AHRC in an interview. He recounted how a prosecutor allowed a hooded witness to testify in the criminal investigation to prosecute them.

When Edwin Egar, a pastor of the United Church of Christ in the Philippines (UCCP) and one of the 72 accused human rights and a political activist, asked the prosecutor why a witness against them had his face covered, he was told only that he would “take note that the witness has covered his face.”

For the accused to know his accuser and the witness against him was to uphold his Constitutional right to be presumed innocent. It is to enable him to make his own defense in a criminal trial. But in practice the police and soldiers routinely justify non-disclosure of the identity of their witnesses on the pretext of ‘security reasons’. However, in reality it is done so that they can conceal the identities of witnesses that provide fabricated evidence.

Egar and his co-accused were charged with the murder of two policemen and their civilian driver in an ambush on March 3, 2006 in Puerto Galera, Mindoro. The murder complaintwas filed in July 24, 2006, but the court held to dismiss the case on procedural grounds not on merit on February 5, 2009.

In his defence, Egar said that he could not possibly be at the place where the ambush happened as he was in school in Baguio City studying theology. He also produced documentation and witness to support his alibi. Nevertheless, the prosecutor proceeded with reinvestigating the murder complaint which took them three years to resolve after it was re-filed at the prosecutor’s office.

It was during the re-investigation that Vincent Silva, who declared himself as a deep penetrating agent (DPA) tasked to penetrate the New People’s Army (NPA), appeared for the prosecutor to testify that the accused were the persons “involved in the planning (of the ambush), thirty (30) served as the main body in the attack, and twelve (12) were in charge of blocking the enemy.”

However, Silva was neither present at the place of the ambush nor had he personal knowledge that those who had planned the attack and those charged were the same persons. The prosecutor, nevertheless, accepted his testimony as evidence offered by the police despite its obvious lack of credibility.

Even when the murder case was dismissed in February 2009, the police and the military continued arresting the accused, including Egar. In the interview, Egar talks about how he was forcibly abducted, tortured, interrogated and threatened with death if he refused to disclose the identity of his supposed accomplices.

“I was arrested. I was abducted… inside the vehicle, they interrogated me, asked me if I had anything to do with the case but I told them: nothing,” Egar said. He was released only after convincing his abductors that the murder charges they were arresting him for had already been dismissed.

The AHRC is deeply concerned by the activities of the police and the military in not disclosing the identity of their witnesses which is done with the consent of the prosecutors in investigating cases for criminal prosecution. This is in complete disregard of the fundamental rights set out in the Constitution.

The text of the unofficial translation of the interview in Filipino 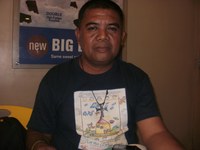 Victim: I am Edwin Egar. I’m a pastor of the United Church of Christ in the Philippines (UCCP) under the Southern Tagalog Conference. I’m presently working with the National Council of Churches in the Philippines as a human rights worker for Faith Witness Service.

I am a victim of trumped up charges or fabricated charges during the regime of Gloria Macapagal Arroyo. They filed the charges on me on March 3, 2006 in Calapan, Oriental Mindoro. The case happened while I was studying at the Ecumenical Theological Seminary in Baguio City. I was studying theology to be a pastor. There were 72 of us who were charged–including another pastor of the United Methodist Church (UMC), a lawyer, persons attached to youth organizations, women and farmers. Some of them were arrested, including Attorney Saladero. Luckily they were released.

However, when they were released after the information (complaint) was quashed, I was arrested. I was abducted by elements of the Armed Forces of the Philippines (AFP) and the Philippine National Police (PNP) at Alupay, Rosario, Batangas. The place where I was abducted, few kilometers away from my home, was the house of my nephew. Suddenly, a black van stopped and those inside, who were armed, alighted from their vehicle. They pointed their guns at my head. My nephew’s son saw it and suffered trauma because of that. He did not speak and we could not talk to him at that time.

While inside the vehicle, they interrogated me, asked me if I had anything to do with the case and I told them that I did not. I explained that I had nothing to do with what they have charged about the alleged ambush of NPA (New People’s Army) in Mindoro. But as I have mentioned, I was studying in school when (the ambush) happened. They asked me where I brought those Itak (a bladed farm tool for cultivation) that I was carrying. They accused me of carrying giving them to NPAs (which I denied). But I told them that if they like, I can accompany them to the place where I brought those tools to satisfy them that I was telling the truth.

Also, the military told me that if I can mention one of those 72 accused, they will release me (right away) at the roadside going to their camp. They took me to Camp Vicente Lim in Calamba, Laguna where I underwent several interrogations; however, after few hours they took me back to where they had abducted, blindfolded me and my hands cuffed. They left me at Barangay Padre Garcia. They asked to count until 20 and threatened to shoot me if I refused to count.

Q: You mentioned that a witness in your case had his face covered when he appeared at the prosecutor’s office?

Victim: I also want to mention that the case was quashed in 2009; however, it was re-filed in 2010 at the same prosecutor’s office where it was first filed where it was quashed. In 2011, they re-filed the case at the province of Laguna in San Pablo City. It was filed at the Regional Trial Court in San Pablo City. After receiving a subpoena, I immediately made a counter-affidavit and submitted it to the prosecutor’s office at the RTC Laguna, San Pablo. At the time, the prosecutor also was conducting an investigation and during this investigation I met the witness, Mr. Silva. But his face is covered with handkerchief and you could not recognize him. I asked the prosecutor why this was so, but all they did only was to a note that the witness has covered his face.

Q: What is the status of the case at present?

Victim: On May 2012 the Court of Appeal and the Regional Prosecutor’s Office in San Pablo, Laguna issued a joint resolution. The decision was they dismissed the (murder) charges against the Southern Tagalog 72.

Q: Do you wish to say anything further?

Victim: I call on the government of Aquino. I hope that they will stop the fabricated charges (on activists), ensure justice to victims for victims of extrajudicial killings, enforced disappearances and other cases of the past administration under President Gloria Macapagal Arroyo.