SRI LANKA: A New Book on negativity and Nihilism in Sri Lankan Consciousness – by Basil Fernando 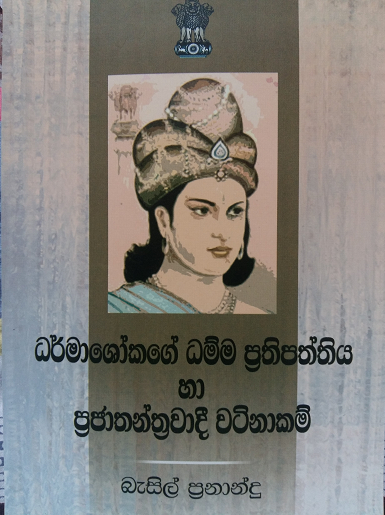 There is something deeply negative and nihilist imbedded into the Sri Lanka consciousness. By ‘Sri Lankan consciousness’ I mean the consciousness of all Sri Lankans, whether they are from the majority Sinhala community or the Tamil or other minority communities. What is common to all is a deep negativity inherited from the far distant past.

In my recent book on Asoka’s policy of Dhamma and democratic values, I trace this negativity to the influence of an Indian philosopher named Adi Shankara, who lived around the 8th Century AD and whose influence on India, pulling it in the same direction of nihilism and negativity, is enormous. Following several others, I have tried to show how this philosophy was brought into Sri Lanka by several Indian invasions in the 8th Century and thereafter, and how it became the predominant philosophical mold in the country, and how it has molded generations upon generations of Sri Lankans.

Many books have been written on Adi Shankara’s philosophy and the writings are from two extremely different points of view: One is from those who religiously venerate him, and the other is from those who deeply criticize him, blaming him for everything negative that has happened in India since the 8th Century, particularly the revival of the caste system, which had been subdued to a great extent by the Buddhist and Jainist movements from around the 3rd Century BC. Those philosophies were replaced with a new philosophy of nihilism, regarding the whole world as an illusion. Adi Shankara’s philosophy was opposed to the dualistic philosophies of previous centuries of Indian philosophy, which regarded the existence of God and the existence of the external world as two separate things. Adi Shankara’s philosophy of non-dualism meant that nothing other than God existed, and that everything else was but an illusion.

What is important is the moral influence of this philosophy. Since nothing exists and exists and everything is an illusion, there was no basis for anything called high ideals or any justification for morality. Morality, too, was an imaginary creation, which was only created in the same way other illusions are created. The removal of the idea of there being a material basis for morality meant that there was no justification or need for morality at all. There is, however, some contradiction in his philosophy: later, it attempted to give advice on how to live and things like that, while at the same time contradicting the very need for doing any of these things, because everything was an illusion, including morality itself.

This philosophy became popular at the time because it fulfilled an objective need of very powerful sectors of society, which had suffered greatly due to the spread of philosophies like Buddhism and Jainism. What was worse for them was that Emperor Asoka had taken Buddhist philosophy into his own ideas of nation builidng and regarded the precepts of Buddhism as a foundation for a just society. His idea of developing social responsibility was on the basis of these moral principles. He is regarded as one of the early rulers who understood the place of morals, as well as the place of social responsibility, as a necessary foundation of social order. His thinking was far advanced for his time, and it in fact encompasses many of the modern developments relating to human rights, ecology and environmental sciences, and the respect for the rights of not only human beings, but also other animals and all living things. With royal patronage, these ideas took root in many parts of India, and as they took root, the influence of Brahminism suffered deep setbacks. Mountains of historical evidence exist showing how Brahminism came to have a much lower place than it had enjoyed in the long period before, wherein Brahmins had been the dominant caste and had enjoyed privileges accordingly.

The caste system of India created something worse than slavery. A key aspect was the creation of the shudra caste, which consisted of everyone in any employment relating to physical strength. Work through the brain was considered to be of the highest level, though it simply meant that those who interpreted the ancient Vedas, so the Brahmins, were at the top of the caste ladder, meaning that they were entitled to all privileges. The nature of the Indian caste system was different from the rank systems in Europe and other countries; even royalty was of less importance than the Brahmins.

What happened in the 8th Century was that the Brahmins and all those castes and social sectors close to them were in need of a new religion or ideology that was able to challenge the place that Buddhism had come to hold in India.

It was this way of life that was exposed to ridicule by the idea that everything was an illusion. There was no basis for making sacrifices because those sacrifices led to nothing. This almost distilled formed of nihilism achieved the unbelievable result of displacing Buddhism altogether from Indian soil.

In later generations, people who wanted to distort history began to attribute the decline of Buddhism to factors like the arrival of the Muslisms. However, despite the fact that the Muslim invasions did considerable damage to various universities, libraries and places of gathering which had become popular among Buddhists, the actual damage had already been done and that was mostly due to the efforts of Adi Shankara.

It is for this reason that he is venerated even today, and the villages he journeyed to, challenging Buddhists to come to debate with him, on the condition that if they lost the debate they would have to become his followers, are today regarded as places of pilgrimage. In Kerela, there is a monument for him in all the villages he visited in which he was able to defeat Buddhism, including many places where he, with a large following, created violence to subdue Buddhists. I have visited some of these places myself.

What is important is to understand how a deep sense of nihilism entered into the Sri Lankan way of life, into all communities, preventing them from absorbing any modern developments that came thereafter.

It could be argues, as Dr BR Ambedkar argued in terms of India, that had it not been for the deep divisions created by these changes that were brought about by the kind of movements that spread this nihilism, the colonial invasions and the final conquest of India may not have happened. Indians could have been unified to fight against these external forces. The capacity for unifying whole populations to fight an invader became impossible because caste divisions became so deep that persons of higher castes could not be around the lower castes for fear of contamination and being considered impure. The ideology of impurity divided the whole nation in the deepest possible way. It is this deep wound that India has not overcome even today, though, due to the efforts of the lower castes themselves, led by many persons, including Dr BR Ambedkar, the status of so-called untouchables and the lower castes have undergone a certain level of transformation. However, there is a long way to go, and what is against these changes is the negativity and nihilism bequeathed through the philosophy of illusion. It is this same thought pattern and philosophy that the BJP exploits even today.

This philosophy was not only imbedded in Sri Lanka by the preaching of the philosophy of illusion, but by village-to-village reorganization by Brahmins brought from India. They traveled from village to village, and the living symbol of their journeys was the way that every village in Sri Lanka was divided by caste. Either there is a single caste in one village or they live in different parts within the same village. There is historical research about such divisions and how they came about, demonstrating a huge changes that occurred in the country, producing division as a result of a nihilistic philosophy.

Today, when the questions of reconciliation are being discussed, it is essential to try to understand the deep philosophical and spiritual roots of nihilism, which rejects even the very idea of developing a single nation. It influences the section of the majority that militates against a one nation idea that includes everyone; at the same time, a section in the Tamil minority group suffers from the same incapacity to understand Sri
Lanka as a single nation.

However, the influence of nihilism is much deeper. If one goes into an analysis of the constitutional changes in Sri Lanka, in which the very principles of western democracy were completely eliminated by the new constitutions of 1972 and 1978,, we see the influence of the same nihilistic philosophy. The inability to understand any modern concept is inbuilt into a deeper psychology, which regards everything, cynically, as illusion. Everything can be rejected without giving much thought to it. This has come to rejection in the very legal system itself, as law itself is considered a matter of no significance, and the people have begun to talk about their own nation as a lawless nation.

A deeper reflection on our history since the 8th Century is very much needed, along with a frank discussion about how the Sri Lankan consciousness acquired this extent of negativity. This needs to be examined by anyone who wants a Sri Lanka that is able to absorb the changes happening in the world and is able to accept that the respect for everyone’s human dignity should be the foundation of their social organization.

« THAILAND: Rights of suspects under Martial Law must be respected; prohibition on visits by family must end